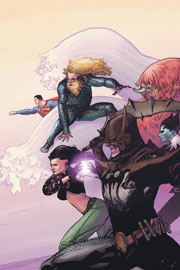 The “Epic” Conclusion of Sorcerer Kings!

I say, “epic” conclusion to Sorcerer Kings because that is what it says on the cover. Would DC lie to us? So was it epic?

In my review of Superman/Batman #83 I hoped for something fresh to conclude this series. What we got was something that has been on the shelf awhile. No, it didn’t stink, but it had all the tropes we have seen before.

Let’s start with page one of this conclusion. Now, didn’t I say Batman always has a plan if Superman can’t punch his way out of a jam? So what do we get? Batman produces a cosmic like key “tuned” into Superman’s past in case things go wrong. Superman replies, “Always with the contingency plans..”

Geeez! No kidding! On page one no less! Not very fresh!

Ok, so how does our story continue? With a battle of course! No wait, an “epic” battle. The new magic Justice League joins the fray against the evil Coven that is about to release the, “She-Beast With A Thousand Heads” to complete their dastardly design. Arthur Curry takes on a “purplely” Firestorm, which was kind of fresh but we didn’t get to see how that turned out. Too bad. Nina gets scorched as does Batman. Superman screams, “Enough” and then something fresh happens!

Sure he uses brute force as usual, but at least it was his idea! Supes magically juices up his enchanted sword and plunges it into the beast sending it back from whence it came.

So are we done? No! Klarion advises us that “chronomancy” is not an exact science (it’s probably not a science at all) “it is wild…unpredictable!”

The future hasn’t changed, Superman must go into the past to make things right. Not exactly fresh there either, going into the past the save the future has been done. Superman hurtles through the Coven’s Stargate and realizes he still possesses some of his magic powers. He uses magic heat vision to destroy the Coven and yells “Abracadabra” in the process.

I had to laugh at that, “Abracadabra” from Superman. But it worked with a small assist from a timely Batarang and we are all good.

So, yes, common themes and majorly over used tropes were employed. The big battle, clever Batman, brute force etc. But how often do we get to see Superman employ magic? (Or yell, abracadabra for that matter.)

These arcs always end with a major fight and one of two of our heroes winning the day. There were some fun things like the future “Bat Wing” being a dragon. I just wish the bad guys weren’t so one dimensional and had an even chance to succeed.

Now that would be fresh.