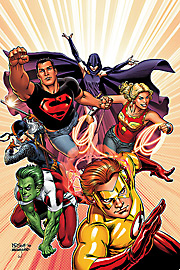 Editor's Note: We put out the call for a reviewer for Teen Titans and Xavi answered the call. If you are interested in reviewing any comic related to Batman email us at tbu@thebatmanuniverse.net.

What separates the Justice League from the Teen Titans? It isn’t the number of members, or their abilities, it’s their place on the “Totem Pole” of DC characters. The Teen Titans are mostly comprised of either sidekicks or of affiliates to more prominent characters. The Titans founding members were Wally West/Kid Flash, Garth/Aqualad, and Dick Grayson/Robin. Ever since, Robin (or Nightwing) has always been on the team, usually as the leader. The Teen Titans never really captivated me. I was aware of their existence in the DC Universe, but this series always stayed in my list of books to read that I never got to. Until know.

Issue #88 promised to be an ideal ‘jumping on point’ for new readers, so that’s where I started. It’s clear from the first half of the book that the team has recently regrouped after the recent Hunt for Raven story arc, and the way that Krul arranges this issue makes it easy to disregard any previous arcs and enjoy is for what it is in essence, a pilot. Krul has written this issue as if he were pitching a new pilot rather than storytelling. It has the essential properties of a good pilot: it establishes who the characters are, giving a small glance at their purpose or their past and it plants the seeds of a large story line (he Feral Boys) while weaving with a difficult new decision, the appearance of the newest Robin.

First and foremost, we get to spend out time equally with the team and with the individual teammates. When the inner monologue was successfully done, we delve into Rose/Ravager’s past and her feelings toward her father Slade/Deathstroke and into Raven’s psyche. Raven was the most enlightening, even goings as far as showing a Lantern Corps-inspired aura map of the Titan’s Tower. The auras that Raven perceives show that the two members of the team that are dating, Superboy and Cassie/Wonder Girl thrive on will/green energy, while the lonesome Ravager’s motivation is anger/red energy. At that moment, Bart/Kid Flash was fueled by the fear of losing what he considered ‘important information’. The most intriguing aura was that of Gar/Beast Boy, of hope. Beast Boy, in all of the Titan’s incarnation has been there to a certain extent for comedic relief from serious moments, but this along with all the other member’s motivation’s shows the potential that this series still has for worthwhile storylines. Speaking of comedic relief, I’m sure Beast Boy will have his hands full for the newest member of the team, Robin.

I think it’s clear that Damian Wayne has become the most complex Robin in a long time (sorry for the two Jason Todd fans) and if doesn’t become a member, will at least provide a good story for the next few issues. The ending to this issue was what will convince Bat-fans to read this series, the appearance of Robin at Titan’s Tower, along with founding member and ex-Robin, Dick Grayson. While the Feral Boys appearance in San Francisco may be enough for the Titans to deal with, I’m sure Batman’s idea of including Robin in the team will not make things any easier for the young heroes. This issue successfully accomplished what it had promised; it provided a great jumping on point for new readers and was able to stand alone, not relying on any past information on the team.

Overall, ok story, excellent cameos, and Scott and Hazlewood’s art did justice to not only the Titans, but also to the Dynamic Duo.