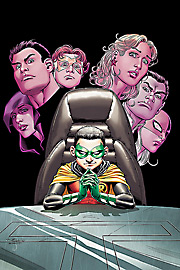 After last issue’s surprise entrance of the Dynamic Duo into Titans Tower, this issue covers the aftermath of the new Robin. The book begins with Doctor Caligan, the newest man responsible for the Feral Boys, taking his newest creation Barney to a Tech Expo in Silicon Valley. Barney begins to explore his new powers and wreaks havoc among the Expo attendees.

Earlier though, The Titans are being confronted by Batman’s request, to allow Damian to be part of the team of young heroes. The choice would not be so difficult, had it not been that within minutes of being introduced to the Titans, Robin has asserts himself as the new leader and claims that Beast Boy should be dropped from the teams roster. If that were not enough, Robin quickly develops a strained with Ravager, going as far as to striking her and having the fight be stopped by Superboy.

After the initial confrontation, Batman is pulled aside by Wonder Girl and is asked if what Batman intends with Robin being part of the team. Not as Batman, but as Dick Grayson, he explains that the Teen Titans do not need Robin, but “Damian needs the Titans…he needs to learn what it means to count on someone…to trust people.” With little more explanation, Cassie accepts the newest Robin unto the team.

Back to the present, while the most of the Titans are unwinding in the Tower, Damian sees some news footage of Barney’s destruction at the Tech Expo. Within minutes, Wonder Girl assembles the heroes and Ravens teleports them to the convention center, Here is where Damian’s personality really clashes with the Teen Titans, as soon as they arrive to witness what Barney’s been doing, Robin rushes arrogantly into the fray. This, the climax of the issue, is the first time Damian participates as part of the team with unexpected results. Without spoiling the outcome, Damian’s participation proves useful at times, yet easily backfires on the team as well.

The writer, J.T. Krul, accomplishes what other writers try to do with Damian’s character. Krul helps expand on Damian’s personality and is able to emulate Grant Morrison’s view on the “fledgling” Robin, shown in a conversation between Damian and Dick, where the former alludes to the fact that he left his mother and all he knew behind to be by Dick’s side. Krul seems to have possibly found a way to incorporate Damian both as a troubled character and as a foil to the Teen Titans’ team structure. The only negative aspect of the books writing is the inclusion of a seemingly new character midway in the story. Kiran, the daughter of two archaeologists seems to be some plot development for another storyline, but Krul had virtually no transition between her story and how it may relate to the Teen Titans.

Nicola Scott does a wonderful job with the art, always highlighting the Titans the most positive of light. Scott’s specialty has proven to be the action sequences, where her styling really makes it simple to read and understand the hectic confrontation between the heroes and the new villain, Barney/Headcase.

Ultimately, this book has stayed true to its initial purpose, even with Damian’s inclusion; it’s a fun book to read. This issue maybe not at good as the last, but a good follow-up to arch established in #88. Not overly dramatic, but still amusing and worth your time.