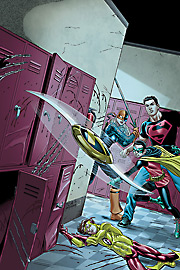 So maybe I did only pick up this book only because of it’s inclusion of Damian Wayne’s Robin into the roster of young heroes. Even if that were true, this book has progressively won me over with every issue. J.T. Krul has written the current arc with a great number of parallels that do not take tell an engrossing story, but instead use the story as the background for the characters to interact and flesh out their motivations. The book’s most attractive new dynamic for me was the relationship between Ravager and Robin who are both “trying to atone for the sins of their parents”.

The book opens with an unrelated story (for now) of the family of archaeologists in Pakistan, a mother and father and their teenage daughter who possesses the power to “create light”. The teen’s parents walk off for some late night excavating in the desert of Mohenjo-Daro as the girl stays at their camp. When she looks up from her book, she sees that her parents’ lantern has gone out, and she immediately runs to their aid. Once she notices that only the lantern lies on the ground and her parents are nowhere to be found, she creates light from her hand and searches for them. And then, that’s it, no more of this budding new superhero. Hopefully we’ll see her involvement with the Titans soon (but probably not).

Back at the Titans Tower, Raven and Wonder Girl are furiously scouring all the databases for information on Headcase. While their search turns up no results, Ravager and Robin are shown in the exercise room; Damian beating a dummy mercilessly and Rose having an inner monologue concerning the similarities that they both share. Rose tells Damian that being a Titan is different than what he’s used to. She explains that the dangers that a Titans faces might be more than a single one of them can handle. She then explains that they must be able to work together. Predictably, Damian undermines Rose’s advice and says that he’s faced worse in Gotham. This is a Krul story. So it can never have too many different conversations at once. Next we see an exchange between Beast Boy and Superboy on the roof of the Tower. Conner explains that he’s been feeling more at home in Smallville, and that he experiences more longing to be in Smallville than at the Tower. Gar explains that those feelings are natural, and then simply tells him to enjoy the best of both worlds for as long as he can. Deep right?

Afterward, Kid Flash arrives at the Tower with information on Headcase. Bart’s found his school’s yearbook at the local library and the Titans head to Walker High School. Before the arrival of the Titans, Barney confronts two students at his high school. The students, a typical jock and a blond girl are assaulted by Barney, but he soon realizes that they also have met with Doctor Caligan (the “teacher” responsible for the Feral Boys and Headcase). Caligan explains that the “entire school is a petri dish—filled with specimens to study”, and gives Headcase the freedom to do with the students what he will. When the Titans arrive at the school, they enter it just at it is being buried by Headcase. Once inside the trapped school, Kid Flash searches the school for signs of any students but then finds Caligan’s blond girl. Kid Flashes scream is then heard by the Titans. Immediately, Robin runs in Kid Flash’s direction. Wonder Girl then deploys Superboy to assist Robin, but Superboy refuses. Ravager then volunteers and follows Robin; together they go in the search of students. Superboy then leaves with Beast Boy to search a different part of the school while Wonder Girl and Raven go in search of Kid Flash.

As soon as “Prom Queen” has Kid Flash knocked out, the female Titans attack her, and realize her steel-like skin makes her a formidable opponent. At the same time, Superboy and Beast Boy arrive at the school’s gymnasium and find Headcase and “Super Jock”. As the both fights progress, Raven uses her powers to transport Wonder Girl and Prom Queen to the gym. When the girls arrive, Headcase breaks the floor beneath their feet, having both the Jock and the Prom Queen fall into a pile of rubble (most likely dead). The Titans manage to avoid falling in, and then regroup. Just then, Robin’s voice is heard through the radio, saying he and Ravager will be there shortly. Wonder Girl then orders them to continue looking for students and not to assist the rest of the Titans. As they run towards the cafeteria, Robin and Ravager share a few jokes and smile, not noticing Doctor Caligan watching them from around a corner. To finish the issue, Robin and Ravager open the doors to find the cafeteria filled with plenty of Feral Boys for them to fight.

Hopefully in the next issue we’ll see the Headcase arc end and see what the archaeologist’s daughter has to do with the Titans. This month’s story had great moments that unfortunately shared pages with some not-so-great moments. The highlight being Ravager and Robin warming up to each other and maybe seeing a friendship develop; while everything involving Superboy was horribly annoying. First was his exchange with Beast Boy, where he shared his feelings for Smallville and…well that’s it. He just said how he doesn’t feel the same about being a Titan anymore. That entire conversation could have been fleshed out more and we could have seen how the rest of the team reacts to Superboy’s insecurities. The way Krul writes, he is clearly just planting the seed for another storyline to come, but this one was not as gracefully done as his others. Superboy’s second disappointment this month was his reluctance to assist Robin at the school. While most of the Titans feel that Robin is not a “good’ teammate, Superboy’s remark about letting Robin “go if he wants” was not very Super. Conner Kent, a protege of Superman, would never allow a 10-year old kid to fight super villains alone, no matter how uncooperative he may be. To finish, Krul’s story continues to develop, and shows that writing for a group of teenagers may not be that easy. The art provided by Hazlewood and Scott never falters, always appropriately portraying the situation. Though it’s never art that you would hang on your wall, it is of much better quality than some other books (you know the ones I’m talking about).

This months issue is great, if you’re already invested in the current story arc. If not, you may want to wait to pick this book up in issue when Tim Drake’s Red Robin appears in #91, a crossover between Teen Titans and Red Robin.