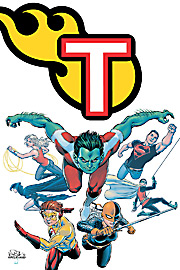 J.T. Krul as the new on-going writer for Teen Titans has moved away from the so often lamentable characterization of Felicia Henderson. Krul, one of the writers for Blackest Night, announced he wanted to focus on the bonds between team members and has done so admirably. With the last three issues focusing on the integration of the newest Robin, Damian Wayne, as the team battles a villain known to them as Headcase.

For those just joining the series, Headcase was a bullied student taken under the wing of the guidance counselor. After having done battle with the Teen Titans in the last two issues, Headcase has taken over his school, along with several other experimental teens known as Jock and Doll Face. Together, they battle the Titans through the school, breaking the team into smaller, more manageable chunks. Wonder Girl and Superboy fight against Jock and Doll Face while Beast Boy attempts to intervene.

In the gymnasium, Headcase sets off a machine, causing a black hole to begin to form. Raven attempts to talk him down while Wonder Girl looks back at Superboy, the latter having fallen.

In another part of the school, perennial outcasts Ravager and Robin do battle with another contingent of school children. Ravager admonishes Robin to be gentle with them, reminding him they're not villains, just children who have been the subject of experiments by the guidance counselor. The two riff off each other as they attempt to take down approximately ninety of the modified students. They decide to make it a competition, who can take out more. They compare parenting styles of their less than functional parents, taking down the majority of the crowd as they do so.

Eventually, we rejoin Kid Flash, who has been stuck in Raven's soul self to recover. As he's passed out, we see flashbacks of the Rogues attacking and killing him. They arrive back in the gymnasium to see Wonder Girl trying to keep Superboy from being sucked into the black hole. Bart, showing another flash of the knowledge he gained from the San Diego Public Library, announces his plan to run around the black hole to disable the machine. Raven's job will be to deal with Headcase.

Raven approaches him, attempting reason and failing immediately. As he talks to her, he maintains a telekinetic wall around the black hole generating machine, blocking Kid Flash's path. He taunts Raven with these feelings, a lack of control, and helplessness. Wonder Girl and Superboy hang on to each other, trying for dear life not to be sucked into the small black hole.

Headcase tells Raven that he will be a God once he manages to destroy the world. Raven, unconsciously summoning the darker parts of her powers, manages to get released. Once Headcase's concentration is broken, Kid Flash breaks through to the machine and shuts it down. Raven kneels over Headcase's body, gently stroking his head.

In the aftermath, the building is shown as rubble, but the majority of the students are safe and being transported to Dr. Mid-nite for help. Robin proudly announces he and Ravager saved all their kids and managed to not blow up the school. He and Superboy discuss how Headcase was taken out by Raven.

We move over to a car driving on the street, the guidance counselor driving away. He muses to himself how the results of the experiment weren't quite what he was expecting, but, as we see a panel of a girl in the back seat, bound up and crying, the possibilities are exciting.

Back at Titans Tower, Wonder Girl stands in front of the statue of the founders, pondering how she is supposed to lead this team. They're a family, and she needs to fight with them but without the emotional connection she has to Superboy. He approaches and they talk. He admits he wants a life outside of being Superboy, he wants a life as Conner as well. They agree it's best if they split up, but admit they love each other.

Back at the high school, the cleanup crew leaving for the day, we see a hand emerge from the rubble before a dark figure pulls itself from under the debris. It walks away, leaving the remainder of the crew dead in its wake.

Back at Titans Tower, Damian looks over the security feeds, trying to understand why Dick would send him there to make friends. He looks over his teammates, dissecting them and concluding by saying perhaps this Rose Wilson isn't so bad. His own musings are interrupted by Red Robin, Tim Drake, appearing on the screen, demanding to know what he's doing there. Further discussion is halted when Red Robin announces he needs the Titans. This story will be continued in Red Robin #21.

Overall, this issue was good. The writing on Teen Titans really hasn't been anything special for the last dozen or so issues, and this arc really felt like J.T. Krul just trying to get a feel for the series before he bends it to his will. I'm curious to see what he's going to do in the future, especially as this crosses over into Red Robin. I make no excuses for the fact that Damian Wayne is one of my favorite characters, and I love any time he gets to riff with someone in battle. The scene between him and Ravager was probably my favorite thing about this issue.

The artwork was clean and consistent through the issue, with sizing feeling very appropriate. The representation of Raven's soul-self and Kid Flash's hallucinations within it were very eerie and mood-appropriate, as was the splash page of Wonder Girl desperately holding onto Superboy as he finds himself being sucked into the depths of the black hole.