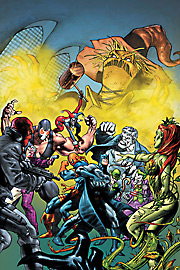 Mercenaries vs. Arkham Asylum inmates! Batman vs. Deathstroke! A murdered superhero! How could Titans not be awesome!? Well, apparently Eric Wallace has found a way. This month Titans concludes its 3-issue arc as the mercenaries infiltrate Arkham Asylum after taking a job to break out a couple inmates. I tried reading Titans back when it was revamped for Brightest Day, but I gave up on it pretty quickly. So I’ve backtracked and picked up the previous issues so I could give a run down on the whole story. Sadly most of the good ideas at play are squandered when put into practice. So let’s take a look at Titans #28-30 and see the great supervillain battle royal that could have been.

The Titans get into Arkham Asylum with the help of a crooked guard. Their mission goes to hell pretty quickly when Osiris botches his assignment to double cross the guard and inadvertently releases all of the inmates. While the rest of the Titans are preoccupied with fighting off the bulk of Batman’s rogues’ gallery, Deathstroke tries to get a hold of their last target. He finds her, but he’s intercepted by Batman and the two of them face off in a pretty good extended fight scene. Deathstroke manages to break away and find the girl again and the Titans successfully escape, using the inmates of Arkham as a shield to keep Batman from pursuing them.

In the midst of all this there are two additional subplots with Osiris and Cinder. Osiris freaks out when he sees Killer Croc and thinks that he is Sobek, the monster that ate and killed him in 52. The ensuing fight breaks Osiris’s resolve to stay with the Titans and he abandons the group. Cinder meanwhile tracks down a supervillain, Nursery Cryme, in order to kill him in revenge for abusing her in the past. Since he is a criminal with mind control abilities and an obsession with children, we can only assume this includes sexually abusing her, but it isn’t actually said. Unfortunately, Cinder ends up releasing the bonds that keep his power suppressed and he manages to fully escape Arkham, leaving Cinder broken and ashamed for setting such a monster free.

The Atom (Ray Palmer) also has a side plot during this arc as he tries to solve the disappearance of the other Atom, Ryan Choi. Last summer readers watched Deathstroke brutally murder Ryan, but Ray is only starting to put the pieces together.

Eric Wallace’s writing has the subtlety of a lead brick. No one needs to wonder what is motivating Osiris, Cinder, or the Tattooed Man because they won’t shut up about it. And it’s always the same motivation, I haven’t read a Titans comic since June and it doesn’t feel like I’ve missed a thing. No one has changed or moved beyond their single-note characterizations. To Wallace’s credit, he does start addressing this by the end of the story, but it’s too little too late.

Looking at the story as a whole there are some pretty bad breaks in logic that only add to the mess. Here are the big ones:

1. How the hell do the Arkham inmates get all their iconic weapons for the big fight? Sure, they were released from their cells, but do the guards let them hang on to their freeze rays and fear gas just for kicks? Even if you factor in an armory raid, the speed at which the inmates are able to arm themselves is nothing short of ridiculous.

2. Why are the Titans even fighting the inmates? They could have simply let them walk past, why are they trying to stop them from escaping? They’re mercenaries who murdered the Atom, they aren’t superheroes. They don’t owe anything to Arkham or the police. If Deathstroke would have just let everybody storm the front gates and murder the guards he could have grabbed the targets and the Titans would be on their merry way. No fuss, no muss.

3. Does the superhero community just not care that Ryan Choi is missing? Are they really that stupid? Why is Ray Palmer even dissuading them from doing something to try and find him? It’s as if the entire Justice League decided that it’s not a big deal for one of their own to disappear, without warning, as long as he’s a minor character. I have to believe Wallace is building towards something with this, but his approach is making a lot of people look like idiots.

After saying so many negative things about Wallace’s writing, I would like to point out at least the few things he did right. Even though she is greatly underutilized, it was nice to see Alyce Sinner appear as the head of Arkham Asylum. It would have been better if some of her sadistic mind games had been allowed to play out in the battle, but I’ll take what I can get. And while we are on the subject of sadistic monsters; kudos to Wallace for the creation of Nursery Cryme. I don’t love the fact that he’s using a pedophile to drum up some drama and personal anguish for a character, but I have to give him credit for making one that is so unbearably creepy. Also, even though I think the Justice League is handling it in the worst way possible, I do like that it is a mystery for them what happened to Ryan Choi. It’s nice to see some dramatic irony play out over a longer stretch in a comic book; it’s a tool I don’t see too often in this medium.

I don’t love Fabrizio Fiorentino’s artwork, but he has gotten a lot better since the original Titans: Villains for Hire special. When he first started on the series, his facial expressions were amateur work at best, but he seems to have gotten over this problem. I wouldn’t recommend him as an artist for anything right now, but he is improving.

If you look at the base ideas behind this story there is a lot of promise, but it was mostly lost in the execution. Unless you really love Deathstroke or find the promise of watching a lava woman setting a pedophile on fire someday worthwhile, I would not recommend this series.