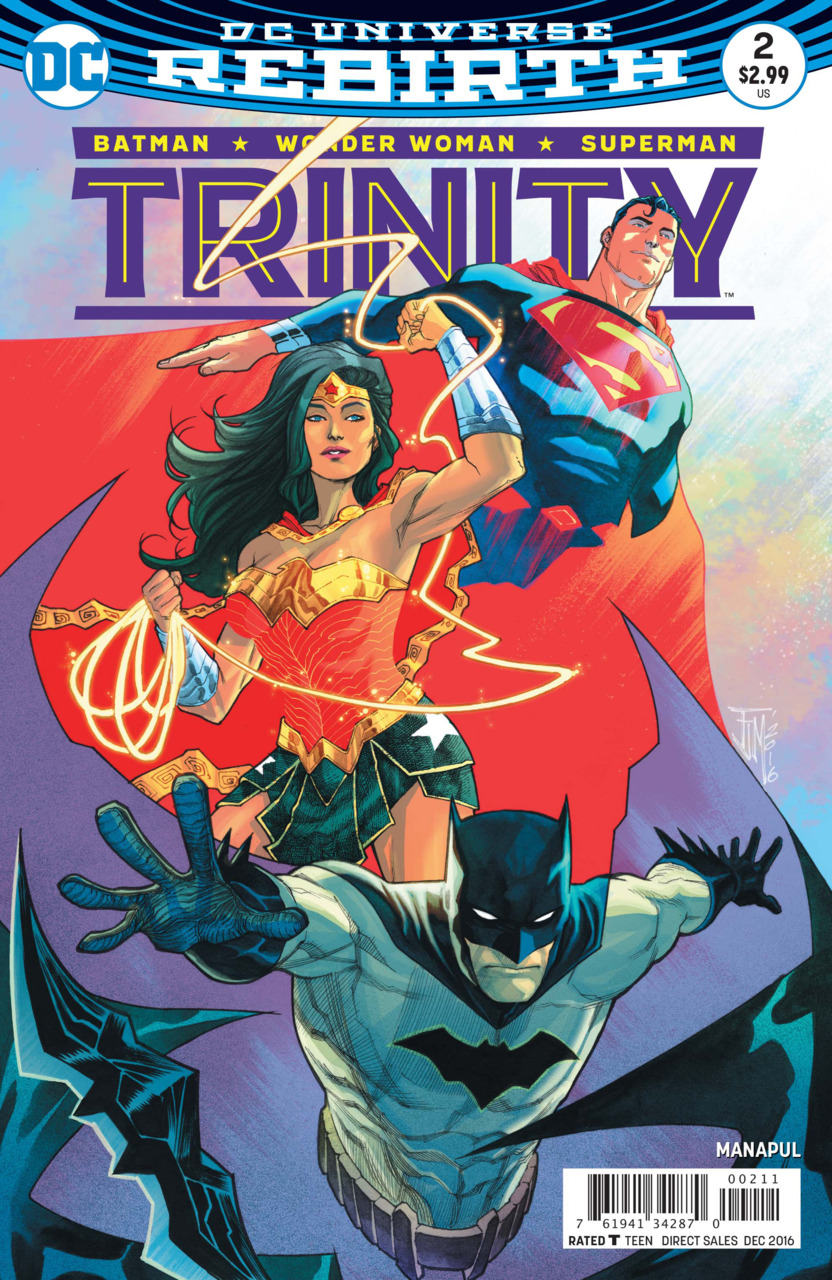 Synopsis: After being transported to some alternate timeline or place, the Trinity finds themselves in front of Jonathan Kent following a heart attack. The younger Clark is terrified of the new costumed arrivals and fights back. After knocking down all three of them, he leaps out of the barn and runs away. Jonathan wakes up and recognizes Superman’s emblem but only reacts in terror that he is here to take little Clark away. Superman reassures him that he is not there to do that.

Over in Devil’s Mouth Falls, young Clark stumbles upon an unknown person in a cave who says that they are there to help him but ominously states that, first, young Clark will help him.

Back at the Kent farm, Jonathan shows the Trinity the spacecraft that Clark arrived in and expresses his fear that, one day, people from his planet would come for him. Jonathan asks Superman for help in learning more about the Kryptonians and finding young Clark. The Trinity pile into Jonathan’s truck as they drive to Devil’s Mouth where Jonathan thinks Clark went. During the drive, Superman wrestles with whether or not to tell Jonathan who he really is despite Batman’s glaring glances. Once they arrive at the falls, the group separates and Batman tells Diana that this place does not feel right and that it feels too wonderful. Diana only tells him that she would feel the same way if she ever found Themyscira. Bruce only warns her that Clark is thinking with his heart and not his mind.

As they draw closer to the falls, Superman and Jonathan discuss being fathers and Superman’s real relationship to young Clark. Jonathan tells Superman that he is the only one that can say the right things to young Clark about who he really is and his role in the world. Suddenly, Superman collapses into the water. Jonathan helps to pull Superman out of the water. Superman tells him that Jonathan may only be normal but that young Clark will only ever need that. They are interrupted by Diana bringing the young Clark out of the cave with Batman. As father and son embrace, Batman tells Superman that there is traces of Kryptonite in the water but Diana points out the boy is unaffected.

Back in the real world, young Jon goes to the barn to see it covered in ivy vines. A cloaked figure approaches announcing the seeds worked and that Jon should have trusted his father about dealing with strangers. Jon collapses and the figure reveals herself to be Poison Ivy. The Trinity is shown to be tied up in ivy vines and dreaming. The issue ends with Poison Ivy she stating that she will take care of them while “He” will take care of them in their dream world.

Thoughts: After only the second issue of the series, this still remains my favorite series currently in the Rebirth titles. I was nervous upon hearing that the main villain would be Poison Ivy but Manapul, so far, is doing a fantastic job of creating his own version of the Alan Moore story “For the Man who has Everything”. I can see how this might play out in future issues with each Trinity hero getting their own whimsical and optimistic version of their past or ideal world and I can’t be anything less than excited.

I really like the internal monologue of Clark throughout this issue. Its clear that he recognizes that there might be something “off” about this place but he can’t fight how happy he is to be with his dad again. Its these “human” and personal themes that I hope Manapul carries forward into the next issues with both Bruce and Diana.

I enjoyed the emotional elements that this issue presented with Clark getting to see his dad again but also the twilight zone quality that this series is starting off with all-to-perfect settings the Trinity finds themselves in. The introduction of Poison Ivy and the mystery behind her partner in crime still leaves enough suspense for the overall plot and the “big bad” they will eventually have to fight. Overall, I am loving this series and would recommend anyone to jump on board this title now to see their heroes presented in a much more personal way.