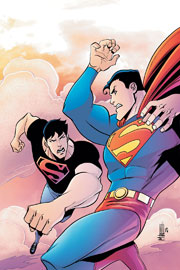 For an issue with only Superboy and Superman on the cover, Young Justice #6 has a nice amount of Robin to start the issue. I will focus heavily on the Robin section of the issue, and less on the rest of the story. This issue continues the “Campfire Secrets” origins theme from last issue. In issue #5, Kid Flash and Aqualad tell their origins to the rest of the team, while Robin refuses to even tell his teammates his real name. I was wondering how they would get to Robin’s origin. So…

This issue begins with Robin thinking about “four years ago,” and his family; mom and dad, his uncle, aunt, and cousin John, and himself, nine-year-old Dick Grayson. So we know that Robin is 13 years old in this Young Justice continuity. Robin thinks about working at Jack Haley’s circus, and how Jack Haley was like a grandfather to him; it was one of the happiest times of his life. “Until the worst night of my life happened.” He lets us know that was when the crime boss named Zucco tried to extort protection money from Haley, and Haley’s refusal. We see Zucco’s henchmen loosening the bolts on the trapeze supports in the background.

Robin then remembers how the Graysons would perform their most dangerous stunt; the finale with no net. Dick was not allowed to be involved with the most dangerous stunt; he would watch the action from the platform of the center pole. “Then it happened…” We see Dick’s face and know what has occurred by the look of shock, horror, and anguish on his face. The next page is a collage of an audience member’s scream, Dick climbing down, Haley with tears in his eyes, Zucco smirking in the shadows; and finally, Dick kneeling on the floor in silhouette with a police car, a gurney with a body, and some of the other circus people looking on sadly in the background. Dick thinks, “a lot of things happened after that,” and this page conveys that perfectly. Then Dick met Bruce Wayne.

In this version of the Robin origin story, Dick’s mother, father, aunt and cousin are all dead; and his uncle survives, but is paralyzed for life. So Dick was welcomed to Bruce’s family, trained with Bruce, brought Zucco to justice, and Robin was born. This is when Kid Flash snaps Robin out of his reverie.
Back to the team portion of the book; Superboy had said, at the end of last issue, that he wants to take down Superman. The rest of the team tries to understand why he would say that, while Superboy broods about the thoughts of destroying Superman that come unbidden to him.

We then get to M’gann telling us her origin. In this version, Mars has a thriving population that lives under the uninhabitable surface. J’onn J’onzz, the Martian Manhunter, decides to hold a competition to introduce a younger Martian hero to Earth. M’gann won the competition, loves Earth, and loves being a part of the team.

The team decides to get some sleep in their tents (they are camping about five feet from the entrance to Mount Justice), but Superboy decides to sit by the fire for a while. Superboy has a daydream in which he defends Metropolis from a rampaging Superman, and is praised as a hero for killing Superman and saving the city. Superboy then flashes back to the G-Gnomes at Cadmus; the thoughts of destroying Superman are what they put in his head. “This is why I was created.”

This was a very good issue. If you’ve seen the Cartoon Network series, you’ve seen the basic cartoon art style; but Christopher Jones (pencils) and Dan Davis and John Stanisci (inks) get to add more emotion in closeups and silhouettes in very good artwork in this issue. This was, as I stated earlier, the second issue of the origin stories, and also moves along the plot of Superboy’s programming from his creation. All in all (especially because of the Robin exposition), this was a very good issue.