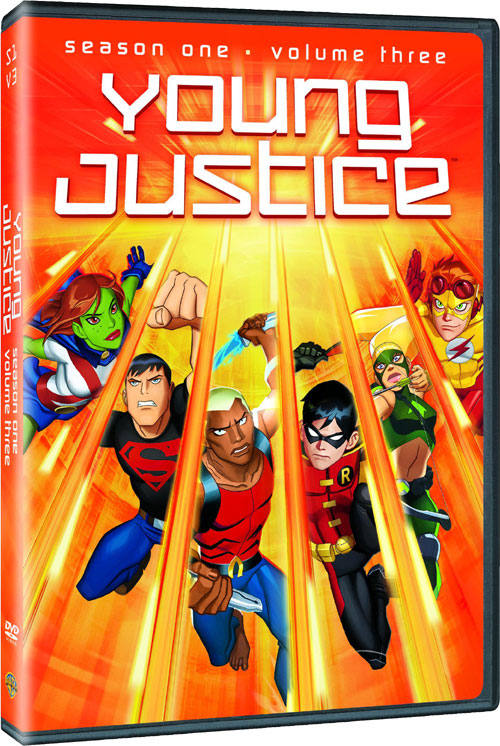 A new release from Warner Bros. Animation has hit stores this week and it collects the third quartet of episodes from the series, Young Justice, and it is a great way to catch up on the series or as a gift to any aspiring young superheroes. While it would be great for a complete season to be collected, we can watch the remaining episodes of the season beginning next month.

This new collection features episodes nine through twelve. What characters are central to the storyline? What happens in the episodes? Let's walk through the episodes individually and see what is in store for this release.

Bereft: This episode has the team forgetting the last six months and focuses on Miss Martian working to regain the team’s memories.

Targets: Red Arrow is brought back through a need for assistance. Aqualad helps him out as an assassination attempt on Lex Luthor occurs. Cheshire, Sportsmaster and Ra’s al Ghul all play roles in this episode.

Terrors: Superboy and Miss Martian go under cover as the Terror Twins inside of Belle Reve to uncover a plot by four ice villains. Mr. Freeze, Riddler and Hugo Strange appear.

A number of TBU characters appear in these four episodes. With this release, you can catch up on the episodes that aired last year and watch the new episodes on Cartoon Network now.

I continue to be impressed by the interactions from the TBU characters with the villains and, of course, the Young Justice team. The episodes are really intriguing and fun to watch as well as awaiting any appearances by The Batman Universe characters. I still wish there were special features, as the previous installments have also not included special features. Overall, if you can’t wait to rewatch some of your favorite episodes, then this is a must-have for any Young Justice fan.

or any retailer nationwide.