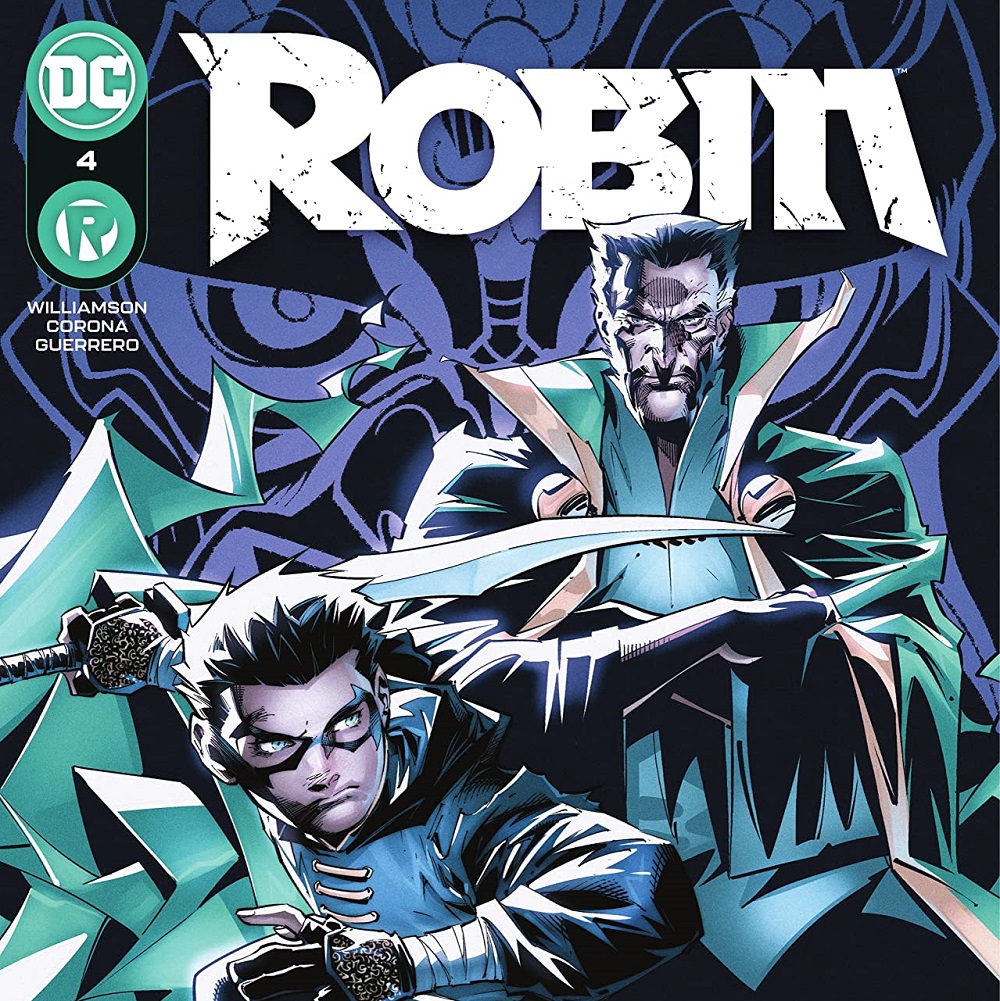 Overview: In Robin #4, after his brutal fight with Conner Hawke, Damian Wayne finds himself outside Lazarus Island and under the care and tutelage of one of his greatest enemies: his grandfather!

Synopsis (spoilers ahead): Robin #4 opens with Damian dreaming of his manga, in which Hana is overlooking Ren’s artwork. This art is supposed to be a self-portrait, and when his piece is revealed, we see that he’s painted as Robin. The black-and-white manga on this panel, however, is splashed with red, and Ren looks in horror at the bloodied batarang he’s been painting with.

Damian wakes up to find Goliath at his side. Remembering the events of the previous issue, in which Conner Hawke had tossed him from a cliff, he realizes that he is no longer on Lazarus Island, but rather deduces that he’s on another island a few miles away. He’d assumed his father had saved him, but comes upon his grandfather, Ra’s al Ghul, awaiting him.

In his impulsiveness, Damian races towards his grandfather in an attack, assuming he was the reason Damian was taken from Lazarus Island and was also in league with the League of Lazarus. But Damian is still very much injured, and he doesn’t make it far before he collapses in pain. Ra’s walks away, instructing Damian to meet him after calming down.

Back on Lazarus Island, Ravager (Rose Wilson) searches for Robin who, as far as she knows, had only disappeared from the party the evening before. She enters a cave and is met by Respawn, a fighter dressed similarly to herself and her father, Deathstroke. Respawn seems to know a thing or two about a thing or two, as they reveal that they know Robin’s name and heritage, as well as her own. After some cryptic banter, Rose leaves the cave to continue her search, but is ‘killed’ by Respawn from behind.

Ravager being the final combatant to be killed for the first time, Mother Soul declares that the true tournament will begin at dawn the next day.

Meanwhile, Damian attempts to hotwire a craft that will return him to Lazarus Island and the tournament, but meets only with failure. Ra’s al Ghul teases him with a set of keys and tells him that he needs a bit more healing and training before he can go back and prove himself.

We are then shown a little training montage that ends with Ra’s explaining his purpose in the world and his concerns for his grandson, as well as the unbearable weight upon their shoulders. After finishing his exhortation, al Ghul turns to Damian only to find that his grandson had left, after nimbly stealing the keys to the craft.

In Corto Maltese, Robin looks over a clandestine meeting between the Lazarus Island priests and the League of Assassins, which has just received a book from Mother Soul herself. Damian, still healing and not yet ready to return to the tournament, decides he’s going to track down the book and find out what is so important about it. Alerted by a presence, he disappears just before he could be ambushed by mysterious figures who had been in communication with Ravager. Damian has the drop on them, however, and he finds himself met with the Bat-Family: Tim Drake, Batgirl, Nightwing, and Red Hood.

Analysis: We finally get confirmation that the Ren character in Damian’s manga is Damian’s perception of himself. In the dream, the self-portrait is of Robin, but splattered with blood drawn from a batarang. Before the reveal, Hana, the potential love interest of the story and the nurturer of Ren’s true art, looks at the portrait and asks what brush he is using. While of course, this leads to the bloody batarang that has crossed out Robin, it also alludes to the fact that Ren drew the alter ego of himself, the persona that Damian puts to the forefront. Robin’s ‘brush’ has always been violent and, as his grandfather later points out, impatience and the need to be the winner at all times. In this dream, however, he is Ren, a somewhat shy and sweet young boy who is trying to understand how to express himself through art with the aid of not a strong physicality under the mentorship of cold brutality, but through the gentle and playful assistance of a young girl his own age. As much as he is trying to follow her instruction, though, that always-present violence is still at the core his dominant feature. As Ren says, his art is indeed a work in progress.

In Robin #4, we discover that Ra’s al Ghul had migrated to this island after his defeat in Batman and the Outsiders #18 in order to re-center himself and redefine and refocus his goals. This puts him in a great position to act as a guide, if temporarily, to a defeated and struggling Damian. This Ra’s isn’t violent and hell-bent at the moment, and his idealism is more contemplative than filled with hubris and anger. He truly has Damian’s concerns as his interest and wants more than anything for the inner turmoil of his grandson to settle and be redirected, if there is no chance of it being stamped out. He inadvertently points inward to his own cycle of life and death when he shows Damian the clear view of the stars. He points out that his intentions as an eco-terrorist are such as to rid the world of smog and murkiness so that everywhere the stars can be seen through clear skies. But it is also his focus on the smog that covers the skies that resembles the smog in his goal. His ambitions to save the world from humanity and yet to rule over it have caused him to do the murkiest of crimes in order to fulfill his vision. It is these misleading ambitions that always cause his downfall.

Ra’s makes a fine point in pointing out that Damian is far too concerned with what others think or believe about him. His reputation has always been at the forefront of his personality, and the sacrifices he was willing to make in order to live up to his own legend in the eyes of the world have been his most glaring trait. From the opening page of Robin #4, we can understand that deep down Damian wishes to be more like Ren, but the reality is that Damian doesn’t have the patience or discipline to dig that deeply into himself just yet.

The tournament on Lazarus Island is set to begin now. Everyone has died at least once, and the grand fight is on the horizon. Damian is on the mend, and his presence will soon be resurrected on the island. Conner Hawke took a backseat in Robin #4, and Respawn has finally had some page count. Rose Wilson recognizes the voice, suggesting that we may also know who is behind the mask. This person knows far more than they should, and I suspect that if Respawn is unmasked, then there will be a deep impact for Rose and Damian.

This book continues to come on strong on many levels while still be fun and filled with humor and action. The artwork pairs wonderfully with the storytelling, and always leaves me thinking about it long after I’ve put it down.