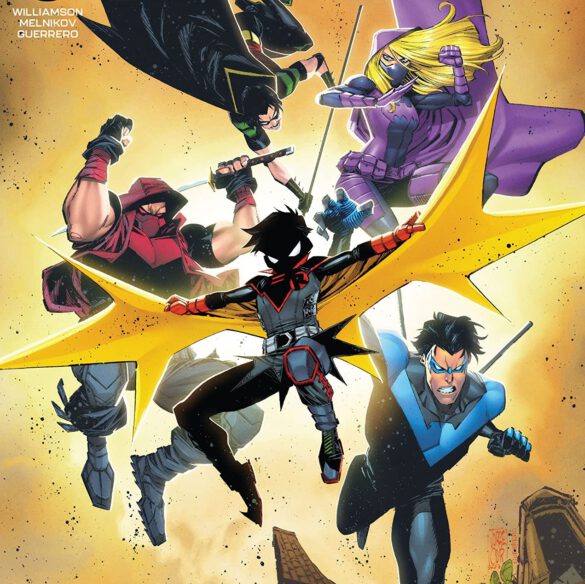 Overview: In Robin #5, Damian is confronted by the other Robins, who try to convince him to come home. After proving himself as worthy of following his own destiny, Damian returns to Lazarus Island just in time for the Tournament to begin.

Synopsis (spoilers ahead): With Ravager’s first death, the Tournament can finally kick off as Robin #5 begins. The League of Lazarus has summoned a magic amphitheater to be used for the combatants starting at dawn the next day.

Meanwhile, Robin races back to Lazarus Island, with much of the Bat-Family in tow behind: Nightwing, Robin, Red Hood, and Spoiler. After hearing what Damian’s been involved in lately, they’re concerned and want to see him back home. Damian agrees to return to Gotham with them without a fight if they can catch him in a rooftop race, and then proceeds to outperform each of them, manipulating their weaknesses.

Dick Grayson does manage to catch up to him, but not to convince him to return: he hands him his birthday present; the trapeze bar that Alfred had repurposed for Dick when he was younger, a reminder of the two different worlds the young man had been destined to live in, as is Damian. This allows Damian to open up about Alfred’s death for the first time since Death of the Family. After a small heart-to-heart, Nightwing allows Damian to travel his own path, and with his blessing. The Bat-Family returns to Gotham and their own adventures, certain that Damian will, in the end, find his way.

Back on Lazarus Island, Ravager, still looking for Robin, overhears the League of Shadows congratulate Conner Hawke on his forthcoming victory after having rid themselves of the son of the Bat. She confronts them, ready to permanently relieve the former Green Arrow of his mentors when Robin appears, very much alive and to the very apparent surprise of everyone present.

At dawn, Mother Soul gathers the contestants to the arena, clasping the book previously received from the League of Assassins at her chest. It’s here we discover that the Tournament is held in honor of her people who were ‘lost to the desert sands’, and is watched over by the demon they worshipped, who also accepts the souls of the dead combatants as a sacrificial offering.

Next; the tournament begins in earnest.

Analysis: With Robin #5, we seem to be wrapping up the first arc of the book, Damian Wayne’s true preparation for the Tournament of Lazarus. This issue was fairly straightforward, with a battle familiar to readers of the Robin titles before, where Damian demonstrates his worthiness over the other Robins. What is different here, however, is the resolution that is given him by Dick Grayson. It was a touching scene in which Nightwing gifts him the trapeze bar. The inscription ‘Versus the World’, indeed seems to be far more fitting to Bruce Wayne’s son rather than Dick. Damian, since birth, has always been taught to fight and prove his mettle against everyone he meets, whereas Dick Grayson was raised with the hallmark of family and love.

We get to see Damian open up at last to another of his deep wound at having lost Alfred, and we hope that it is with this that the young boy can truly begin to climb out of his despair and move on. It is also very fitting that it was Nightwing who was able to get through to Damian for, as he said, Damian is different because he was Dick’s Robin first, instead of Bruce’s. Everyone under Bruce’s tutelage was treated with a heavy hand, while Dick Grayson’s Batman was a far more compassionate and humane character. It is with this warmth that we see the necessary wall fall down in Damian Wayne’s seemingly impenetrable fortress of what he feels he should be. The character who he secretly yearns to be as evidenced by the manga he carries around is someone who responds to care and love.

Up until now, Damian has been strong-arming his way onto this path, fighting the people in his world not just physically, but emotionally and mentally. But Dick gives him support and encouragement, providing his ward with an emotional safety net that he didn’t realize he needed. And now, he can be ready to face the tournament of death.

While not as subtly layered as the preceding issues, this one ties up Damian's readiness for battle on Lazarus Island nicely. With the exception of Bruce, Damian has had meaningful interactions with the most important people in his life to prepare him not only for this tournament, but also for his own personal navigation of becoming his true self. The coming-of-age storyline and the Tournament background continue to be compelling, and the artwork continues to remain just as excellent. The only drawback with this issue is that it felt a bit too short and I would've liked to see a bit more emotional interaction with the other Robins.