Review: Robin and the Making of American Adolescence 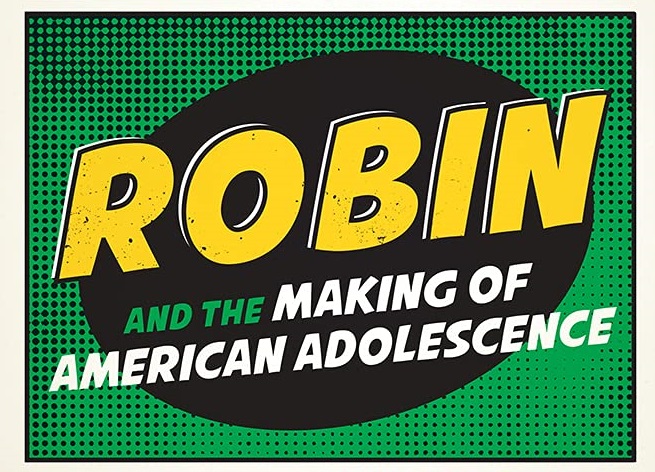 Overview: In Robin and the Making of American Adolescence, author Lauren R. O’Connor takes a critical lens to many of the characters who have worn the Robin uniform over the years, using critical theories to analyze their growth and reflection of society during their stints as Robin.

Synopsis: Robin and the Making of American Adolescence dives into the mythos of the Robin characters as they relate with the emerging science of adolescence.  The author first discusses the theories of adolescence that have developed from two theories of the time. The first of the two theories of adolescence is Recapitulation Theory, which looks at adolescence as a stage of life that helps the child evolve into an adult.  The second is Life Span Development Theory, which assigns different aspects of emotional and cognitive development to specific stages of life. O’Connor then looks at several heroes that have taken the name of Robin in one form or another, the first being Dick Grayson. The writer here looks at the heterosexual evolution of Grayson to the white male hero Nightwing, who would take on the mantle of Batman as his end-stage of maturity.  The other Robins analyzed are Carrie Kelley from The Dark Knight Returns and Stephanie Brown, though Brown’s stint was short. Finally, the writer looks at the black character Duke Thomas, a character who is never officially granted the title of Robin.

Analysis: I find the writer’s premise here in Robin and the Making of American Adolescence interesting. She first takes a look at Dick Grayson and his evolution as, as she describes it, a queer introduction, an asexual foil to the hyper-masculine Batman, the truly mature white male. She does touch on the Seduction of the Innocence controversy involving Frederick Wortham and the creation of the comics code during Dick’s time as Robin. She then maps his gradual maturation first in changing his hero codename to Nightwing to immediately having sex with his Teen Titans teammate Starfire as a way of showing his sexual maturation to being heterosexual. She goes into Dick’s first run as Batman in the Prodigal story, where he partners with Tim Drake, to his later turn after the Battle For The Cowl event where he becomes the mentor and father figure of Damian Wayne.

Her analysis here is compelling, and at first, I was very skeptical. I mainly understand the character as being very heterosexual. Nightwing has had more female relationships than just about anyone in the DC Universe, Batman included. He even has tried to start a fling with the openly lesbian character Kate Kane. The thought of Dick Grayson as being queer was foreign to me. When the character in his initial debut is examined, it makes sense. Robin is inexperienced, and he takes risks that eventually get him captured over and over again. A state that makes Batman look like the hyper-vigilant male father figure, Batman is always protecting and explaining his actions to the wide-eyed and vulnerable boy. Robin even holds the title of the Boy Wonder. It is not too hard to figure out why Wortham got his ideas about his interpretation of the duo’s relationship. Robin was introduced to be Batman’s son with the hope of watching him mature. The rest of Dick Grayson’s life can be interpreted as a natural evolution of the boy to the heterosexual man, leader, and father figure he will eventually become. There have even been storylines that have shown Dick Grayson as possibly becoming a biological father in his own light. The interesting thing to note here since race is predominantly discussed in this book is that his first sexual fling is with a non-white alien. Starfire is not a human woman in any way, and she has an orange skin tone that, agreed is not black or brown, but nevertheless is not your typical white heterosexual girl that is expected of a white heterosexual man that some would find appropriate. We have come a long way, but there is still a ways to go.

Next O’Connor looks at Carrie Kelly and Stephanie Brown together as the only female Robins. She first looks at the lack of character of Carrie to her role of eventually looking like the bereaved wife of a dead Bruce Wayne that I find very problematic. When I looked at the scene at the cemetery, Carrie’s attire is just that, an all-black dress with a black veil over her nose and mouth. Granted, it allows for emotion to show when she realizes that Clark Kent actually can hear Bruce’s heartbeat in the end. The most damaging portrayal is the portrayal of Stephanie Brown as Robin. She was never meant to be a long-term Robin in the first place, and that is damaging to her character. Throughout her crime-fighting career, she is shown as being rebellious to the male heterosexual Batman, not following his orders but instead doing her own thing. This does not change when she briefly becomes Robin. She is abruptly fired after disobeying the all-knowing Batman. To prove herself, she helps start the events of War Games, which leads to her capture and death at the hands of Black Mask. The writer here says that this turn of events is a show of punishment for the woman that would defy Batman. It is hard to not argue given that Stephanie herself says she deserves what she is getting, which is too vile for me to even write about. If this was the plan of the creators of this sequence, then I am ashamed of being a white man. Stephanie is a character and not a plot device, which is far too common in comics today. That needs to change quickly.

Lastly, O’Connor delves into the life of Duke Thomas, a black boy in foster care. We get an overview of the We Are Robin comic and the Robin War storyline. O’Connor focuses on the fact that most of the teens in the We Are Robin movement were not white, and they need saving by the more capable white heroes of Gotham, mainly the male characters that have been called Robin. O’Connor goes to great lengths to show the opposition of Damian Wayne to Duke as being a white boy laying his claim to a black boy. That has some problems. Most notably, I do not see Damian as being white. Yes, he is the biological son of Bruce Wayne, a white man, but his mother, Talia Al Ghul, I look at as being Asian. Damian is at least half-Asian. This is solidified with me in his character being included in the Festival of Heroes Asian Celebration issue DC put out earlier in 2021, an issue I reviewed for the site. It is interesting and noteworthy to state, and the writer here does, that Duke never becomes Robin himself.  Instead, he is given the name of Signal and given a bright yellow suit and placed on the Outsiders, a team consisting of non-white characters operating in Gotham, and told to patrol the day while all the “real” heroes patrol the night.

I will state that the last chapter in Robin and the Making of American Adolescence is about the media appearances of Robin, which is mostly dominated by Dick Grayson. Here there is a show of growth in the characterization of Robin from the “gosh, holy” Burt Ward to his portrayals in the Batman: The Animated Series and Young Justice.  That, I find promising.

Editor’s Note: Rutgers University Press provided TBU with a review copy of this title. You can purchase your own copy of the title by heading over to Amazon.

Robin and the Making of American Adolescence

This is a fascinating read, and I found it to be very thought-provoking. It elicited feelings of anger and shame especially when I was reading the parts about Stephanie Brown. I could not think but reflect on The Killing Joke and the damage that story did to a very capable female character in Barbara Gordon. I, for one, fell in love with Stephanie when she was Batgirl in the pre-New 52 run of the title and to think that she was just a throwaway character designed to say: “see this is what happens when you disobey the established male authority” I find very disheartening and damaging to humanity in general. We need a Robin that is more inclusive, and I am happy that Tim Drake has come out as being bi. It is a step in the right direction. Time will tell where this story may lead. Others have fallen flat.