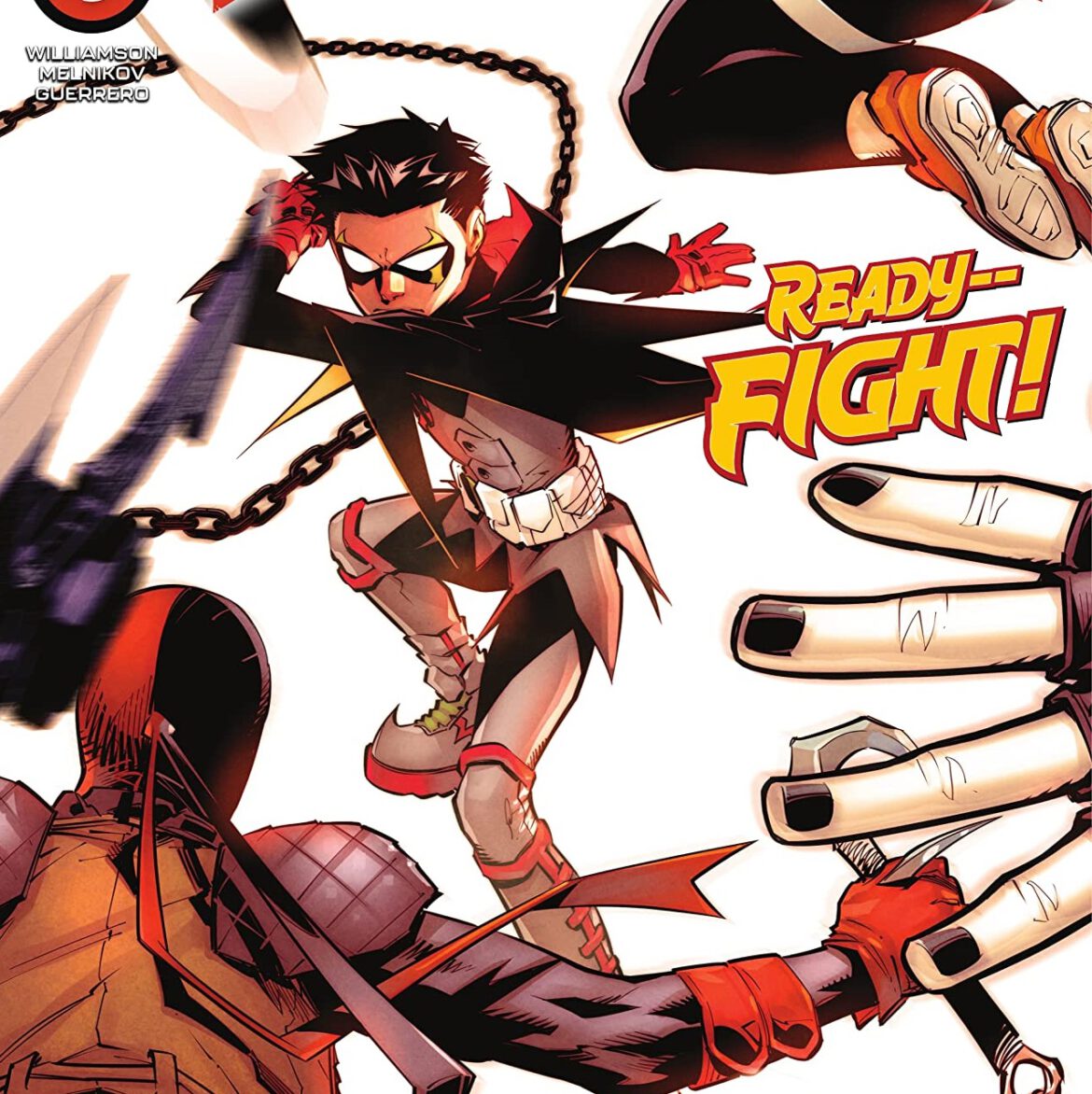 Overview: In Robin #6, at long last, the League of Lazarus Tournament is on! Battles are fought, alliances are forged, and Mother Soul’s true plan is one step closer to being revealed.

Synopsis (spoilers ahead): Robin #6 begins on Lazarus Island and the tournament has begun. In round one, everyone is matched up with an opponent. All battles are fought simultaneously. Robin has been pitted against Shrike’s brother, Blue Shrike. Without breaking a sweat, Damian Wayne snaps his adversary’s neck and moves on to his next opponent, Tengu. This battle is a little tougher but not by much. Tengu manages to slice Damian across his face, but Tengu’s arrogance makes him vulnerable. As he rushes Robin, Damian kicks out and rebounds Tengu’s own sword into his head, killing him.

The speed with which he has marked his first two victories has given Robin a moment of respite, in which he alerts Mother Soul that he is suspicious of her intentions and takes a few minutes to talk with Flatline, who is also waiting for round three. Flatline catches Robin up on who else is looking primed to be their competition. At this point, the next bracket will include themselves, Drenched, XXL, Ravager, Hawke, and whoever wins the current battles between Double Dare and Black Swan, as well as the victor between Respawn and Jiro.

During their interaction, Flatline returns Damian’s manga to him, which she had stolen from XXL, who had stolen it from Damian’s stash when he temporarily left the island. She’d also read and enjoyed it, saying that Lord Death Man didn’t allow her the pleasure. We then get Flatline’s origin story.

Flatline was born with the ability to absorb someone’s skills upon their death, which she feels led to her fascination with death. As she grew older, she sought answers and training and eventually found Lord Death Man and became his apprentice. It was Lord Death Man that entered her into the Lazarus Tournament in order to absorb the skills of some of the deadliest fighters in the world at the moment of their own deaths.

At this point, the two have started to bond, causing Damian to become uncomfortable. Using a pain in his shoulder as an excuse to extract himself, Damian gets up to leave. Flatline offers help, which he refuses.

They are interrupted by Ravager and Hawke, who collaborate with them on trying to find out what Mother Soul is really up to. Damian isn’t terribly pleased with even speaking with them, however. After all, Ravager had been sharing information on Damian’s whereabouts with Red Hood, and Conner Hawke had tossed him off a cliff. In the midst of this confrontation, however, they are interrupted by yet another figure: Respawn. His presence, however, is merely to throw intimidation at these survivors of the first couple of rounds of the Tournament.

Mother Soul declares the third round ready to begin, and the final eight contenders engage in mortal combat. Robin’s opponent this time is Respawn, who detects that Damian is allowing him to win. But what Damian’s really doing is maneuvering himself to get close to Mother Soul’s book, which he takes at the first opportunity. Having learned to decipher much of the language, Damian Wayne realizes who Mother Soul truly is! We, however, will have to wait until the next issue.

Analysis: At long last, we are in the thick of the Lazarus Tournament. Robin #6 brings us through the first two rounds, eliminating all but eight of the combatants, most of which happen to have ulterior motives for being on the island in the first place.

When Robin is sitting with Flatline, he comments on the match between Double Dare (who, by the way, and according to the rules, killed her own twin sister) and Black Swan. He notes that while both are talented and graceful, what puts Double Dare at a disadvantage is that she’s used to working as a team. This is insightful because it shows Damian’s self-awareness of how he needs to keep emotionally distant from the other fighters in order to win. Any bonds would, in his eyes, set him up for a downfall.

Nevertheless, he finds himself surrounded by partners. Flatline opens up to him, Ravager has been looking after him, and even Hawke seems to have forged a bond with him.

Our favorite in-universe manga makes its return in Robin #6, and as always, it makes a comment on Damian’s own story. Flatline had retrieved it after Damian had left and read it. She notes that it’s not just a romantic tale but also touches heavily on being competitive, a subtle nod to what Damian is working through with this tournament.

In Flatline’s origin story, she notes that Lord Death Man’s personality seems to have centered a little since taking her on, suggesting that the bond between them is softening his heart and soul a bit and perhaps making him a better person. This narrative can of course also be relative to Damian, whose entire personality is built around emotional isolation as key to effectiveness. But, as we have seen many times over, within himself he cannot kill that part of him that yearns to reach out and be part of something outside of himself; to connect with others. It is also at this point that his subconscious ally, Alfred, speaks to him, approving of Flatline. Damian, however, is still not willing to take comfort with this softer aspect he yearns for in the figure of Alfred Pennyworth. He stubbornly attempts to cast off any warm bonds with his friends and family.

We discover that Flatline has the ability to absorb someone’s power when they die. She is fascinated with death and goes to Lord Death Man to learn its ways. And yet she offers to help Damian when he complains of a shoulder ache. We can take this as a friendly bond, or perhaps even a flirtatious moment as expressed by Rose Wilson and, later, Respawn. But perhaps we can see a little more into it if we look hard enough.

In Robin #1, she literally stole his heart, causing him to die and realize what the island’s abilities are. Ever since then, the story has very clearly pointed in many ways to this struggle that Damian has between who he was, is, and perhaps will be. And Flatline has been willing to help him each time their paths cross, even though he is unwilling to reach out and accept it.

I believe that in Robin #6 we see the characters of the manga in color for the first time, and it doesn’t seem to be a coincidence that Hana’s eyes are the same color as Flatline’s. As Hana instructs Ren in expressing art through feeling, Flatline seems to be pressing Robin in a similar direction. If Lazarus Island is a place where you are reborn, Flatline may be acting as a guide that leads Damian from shedding his past self and into something better. In effect, killing what he used to be so that he can grow into a new being. Perhaps Respawn is wrong when he taunts them; Flatline just might be the avatar of death, after all.

Robin continues to be a great delight to delve into, and as the Lazarus Tournament reaches its climax, we are still left guessing what is behind it all. Wonderful storytelling and terrific art blend together to make this layered story a breeze to read through and encourages revisiting in a great way.