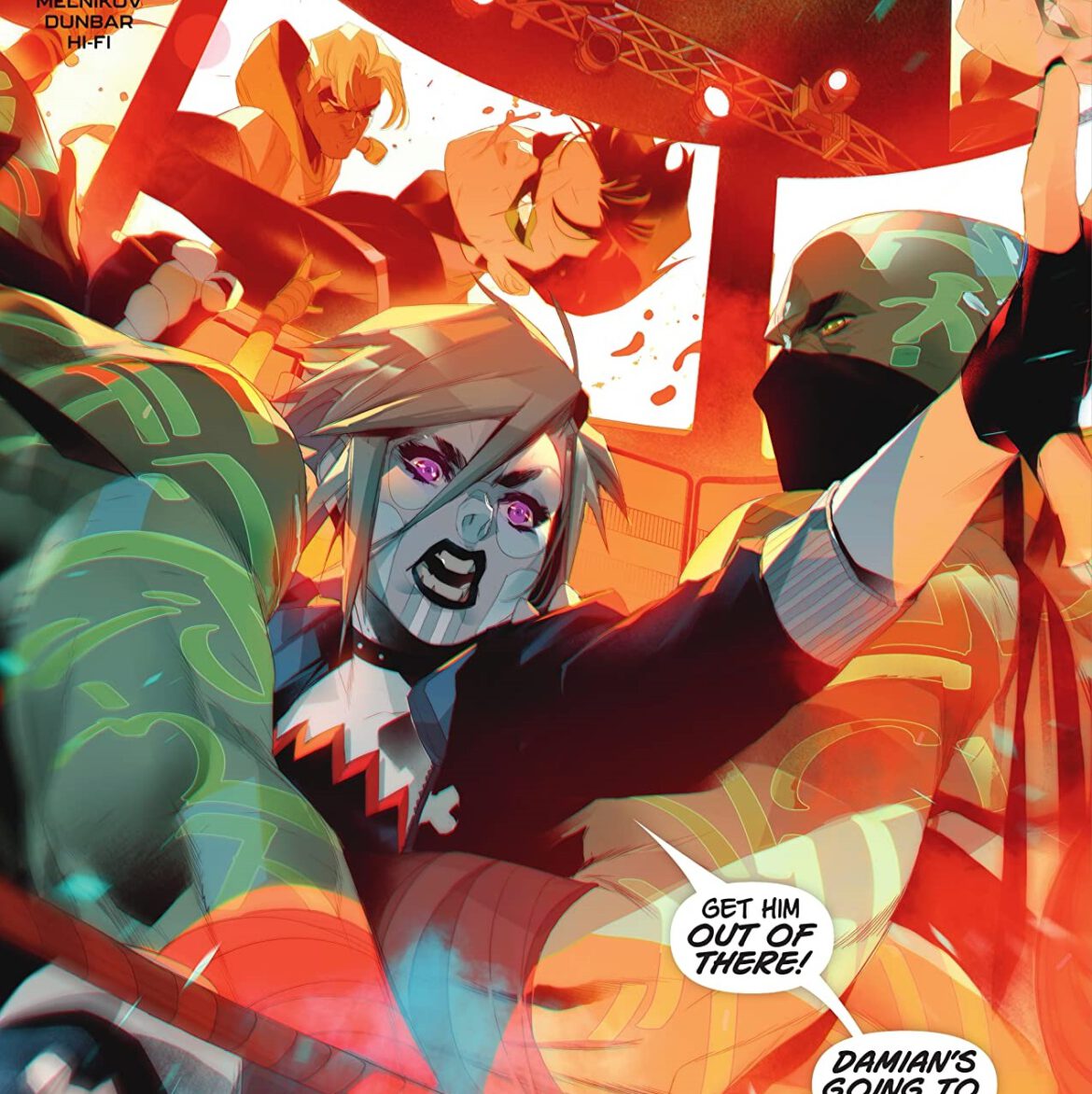 Overview: In Robin #8, it’s the final round of the Tournament of Lazarus, and as Robin and Connor Hawke face off to see who will be considered the world’s greatest fighter and earn a place as the right hand of Mother Soul, something monstrous bubbles up from the island’s Lazarus Pit!

Synopsis (spoilers ahead): Robin #8 begins on Lazarus Island, as two acolytes of the League of Lazarus stand guard over the Lazarus Pit hidden within the island’s bowels. The pit, usually flat and serene, is now bubbling fiercely. The activity above has awakened something from its depths, and soon that something will reveal itself.

On the island proper, Rose Wilson awakens the recently-deceased Flatline (whom Robin had killed in Robin #7) and brings her to where everyone has gathered around the Tournament’s final two combatants: Damian Wayne and Conner Hawke.

Instead of fighting, the pair have spent an hour sizing each other up. Damian reflects on the moments they have shared, the brief friendship they exchanged, and that time when Connor threw him off the cliff to certain death. This last moment focuses on Damian, and he breaks the calm. The two lunge for each other.

Both fight on fairly equal terms, and at one point come to a stalemate. A hush falls over the crowd and Respawn of all people begins a slow clap that catches on until soon the arena is in an uproar of applause. After a small reprieve, in which each fighter takes a moment to breathe and feed off of the admiration of the crowd, Robin and Hawke are at it again. Eventually, however, Hawke gains the upper hand and outmaneuvers Damian. Connor tries to convince Damian to let the fight go; it would only be his second death, after all, and the entire trial would finally end.  Damian, however, has come to understand the role of this tournament as it applies to his life and refuses to back down. He battles on.

Despite everything, Damian is unable to get a foothold back in the fight, and after a few counters, Hawke reaches out and breaks Robin’s neck, effectively ending the Tournament of Lazarus.

After the briefest of moments of realization, Mother Soul makes her appearance and asks if anyone would risk their final life to challenge Hawke. When no one steps up, Mother Soul forges an alliance with Master Dusk of the League of Shadows with the purpose of creating a new world in their vision.

Connor demands the tournament’s reward, and the Lazarus Pit is opened. The violence of the fight and Robin’s death have caused the pit to boil considerably, and when opened, a pillar of Lazarus energy erupts from its depths.

The other combatants try to flee, but they find that the ships have all been set aflame. They have been surrounded by the Leagues of Lazarus and Shadow. Mother Soul explains that they were never really going to leave the island; they were always meant to become fodder for charging the Demon of Lazarus Island.

Mother Soul is interrupted by Damian, reborn, fully healed, and ready to face her Demon. Connor warns him away, explaining that he had been training and fighting the world’s greatest fighters for just this very task: he, alone, has the abilities to take on the Demon. Just as he finishes, however, Connor Hawke is murdered from behind. The Demon of Lazarus Island has arisen!

Analysis: With the Tournament of Lazarus Island finally over after the events in Robin #8, Damian now faces the aftermath and the journey’s true test in facing off against the embodiment of the Lazarus Pit. Every victory, and every defeat, has brought him to this moment.

Most humbling, perhaps, is the actualized fact that Damian Wayne himself, son of the Bat and heir to al Ghul, despite all of his bravado and entitlement, is in fact NOT the best and most capable fighter. He threw everything he had at Connor Hawke, and in the end, it wasn’t close. Damian fell with a simple counter.

I found myself as genuinely shocked as Livewire and Ravager at Damian’s loss. In the Batman Universe, we almost always see the ‘good guy’ win in the end; even in the most ridiculously insane circumstances, our hero generally pulls out some trick to come out on top and save the day. Even though in the back of our heads we realize Damian has another life on this island, it was still a shock.

Acceptance for someone like Damian Wayne is probably the most difficult mountain to climb. Being treated as the best, and truly believing it (even on just a superficial level) makes pride a nearly impossible trait to swallow. Alfred Pennyworth’s death, and Damian’s undeniable role in it, as we have seen, has made a deep and lasting impression on the young boy’s soul. “I failed someone who meant a lot to me. Because I wasn’t GOOD enough. This island is my punishment for that.”

This tournament has had the unique ability to remind Damian time and again of how fallible he is. He’s visited death multiple times, and even though he still expects to be the best, we see him more humbled and accepting of his inner demons and a bit more reborn. The creatives on this book have really been able to expose the heart of Damian and the world that surrounds him.

But now as we see Damian, on his very last life in Robin #8, is ready to stand tall against the Demon of Lazarus Island, stripped of his advantages. He no longer wears the mantle of his father, nor the symbols of his grandfather, but is exposed as his true core, and will finally fight without the protection of either, but also surrounded by his new peers.

The creatives continue to delve deep into Damian’s story and are masterful at depicting a rich and touching narrative in this coming-of-age arc for one of the most compelling characters in the DC Universe. With beautiful art and contemplative storybeats, Robin remains a top-tier book and a must-read for fans of all ages.