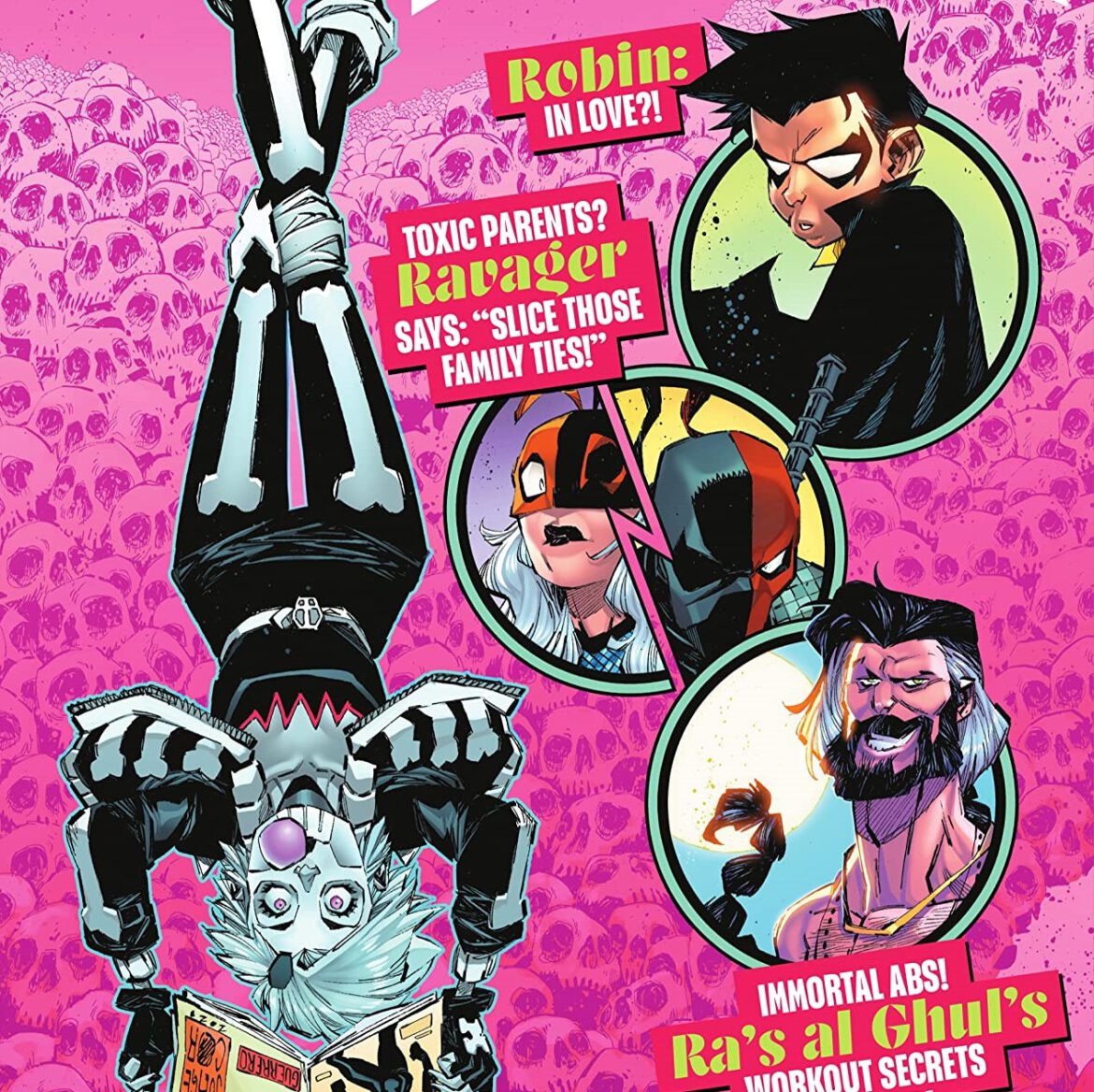 Overview: In Robin 2021 Annual #1, it’s the morning of the first day of the Tournament of Lazarus, and Robin takes a few moments to uncover the secret files and origins of some of his opponents! Learn the motivations of some of the tournament’s most formidable foes: Flatline, Ravager, Black Swan, XXL, Hawke, and the Drenched!

Synopsis (spoilers ahead): Robin 2021 Annual #1 opens at the docks of Lazarus Island, just before dawn on the first day of the Lazarus Tournament. Two acolytes of the League of Lazarus disembark a ship with the Book of Lazarus and head to Mother Soul, not realizing that Damian Wayne, having returned to the Island after his encounter with Hawke, Ra’s al Ghul, and the Bat-Family, lurks in the waters nearby.

As he works his way inland, conversing with ‘Alfred’ as his subconscious, he pulls out the escrima stick that Nightwing had given him in Robin #5. Damian finds a tracker inside, which he uses to access the Batcomputer’s files and learns more about some of his opponents. These files act as a narrative bridge to a few origin stories.

In Moscow, two sisters, one of whom will eventually become Flatline, are summoned from the waiting area of a hospital and into the room of their grandfather as he passes away. While most of the family is in tears, mourning, the girl who would be Flatline receives a vision of her grandfather’s past, revealing that he was a serial killer. Furthermore, at his funeral, she is visited by his ghost, who reveals that she has inherited his gift to learn the abilities of those who have died. He warns her that her family is in danger, and sure enough, the preacher presiding over his funeral turns out to be a gun-toting villain sent to kill them. Having learned her grandfather’s skills, however, the girl quickly kills him, and with his skills added to her, also kills two other hitmen hiding nearby.

Her family, horrified at her, runs, and she is left to fend for herself. She seeks to learn more abilities but quickly finds that their skills are only accessed if the deaths are fresh. So she sets off to Tokyo, where she meets Lord Death Man and trains under him as his ward. Lord Death Man being immortal allows Flatline to quickly gain experience and talent.

Soon, in exchange for a vial of Lazarus blood, Lord Death Man enters Flatline into the Tournament of Lazarus.

Black Swan began her career as a trained dancer who killed everyone onstage after losing control of her temper.

XXL is a cocky rich ten-year-old who loves to fight for reputation.

The Drenched is an Atlantean-Trench hybrid, created in Atlantis without Aquaman’s knowledge, who escaped his confines.

Weeks ago, Rose Wilson aka Ravager, with the help of Jason Todd, races through the streets of Bludhaven in search of her father. They enter an old hideout of his that has been turned into a ninja lair. After dispatching the ninja, an acolyte of the League of Lazarus invites her to take part in the Lazarus Tournament before disappearing. Rose pockets the token he gave her and continues her search, discovering a hideout that wasn’t her father’s, but rather her older brother Grant’s, the former Ravager. Angered that someone ‘stole’ her brother’s stash, she sets out to find them, presumably heading to Lazarus Island.

Connor Hawke trained hard to become at least as good as his father, and in the process became a hero, and one of the greatest fighters in the known world. When he died, he washed up on the shores to be found and revived by the League of Shadows. In exchange, he was to become their warrior and representative in the Tournament of Lazarus.

After learning everything he desired from the files, Damian destroys the tracker, not wanting to be tracked by any of the Bat-Family, and wishing no further help from his father. As the dawn breaks over Lazarus Island, Damian descends upon the Tournament of Lazarus, to be continued in the pages of Robin.

In an epilogue, Ra’s al Ghul meditates when he is beset upon by a faction of Talia’s League of Shadows. His daughter wants to have a talk, which will be revealed further in the pages of Batman, Robin, and Deathstroke, Inc., and leading into the upcoming Shadow War event.

Analysis: Robin 2021 Annual #1 serves as a nice filler issue occurring between the time Damian spent off of Lazarus Island and his first official round. Learning to understand his opponents is better than trying to overpower them, scouring his father’s files is a wise way of gaining a necessary advantage, as well as giving the readers an opportunity to take a peek into the lives of some of the arc’s more notable players.

Frustratingly, with the exception of Ravager and Hawke (who have already been well-known in the DC Universe for decades), we never learn the true identity of these characters. We have only their adopted monikers to identify them, and some of these characters, such as Flatline, have been so well-developed that I want to be able to know their true names, which would help give them that much more of a dimension.

Many of the profiles are very short and focused, which leaves me wanting to know more of them, and I’m disappointed that they received only one page of treatment.

That being said, the main focus, Flatline, took up more of a satisfying page count of the issue. Her history is explained and her powerset revealed in an organic manner while teasing even more questions. Does her skin and hair color alter and pale with every kill? Is she also somehow absorbing her victim’s genetics as well as their traits and knowledge?

With all of the skill and experience she’s acquired, it’s still quite clear that Flatline is susceptible to naivete, as sharp as she appears to be. She looked to Lord Death Man as a master of death, a sensei to be revered; but he ultimately proves himself to be a rather silly and selfish creature pretending at greatness and willing to quickly pawn off his sidekick for a vial of Lazarus blood, suggesting that he is not nearly as immortal as Flatline is led to believe.

Ravager’s backstory gives us a tiny glimpse into the possible identity of Respawn, who is either her older brother Grant returned to life or a copycat version of the Wilson family. This gives us her motivation for entering the Tournament. The acolyte had not come to the hideout for her, and so of course the person who stole her brother’s identity would also be invited to the Island, as well. There seems to be a little bit of a plot issue here, though. Rose Wilson knew of Respawn’s involvement with the Tournament, but in previous issues of Robin, she seems to have made little to no effort in confronting and unmasking him. If this was her intent all along, even in addition to watching over Robin, why hasn’t she gone after him more aggressively?

Unfortunately, the remaining characters didn’t get as in-depth treatments as Flatline and Ravager. Even Hawke, who got an extra page more than Black Swan, XXL, and the Drenched, revealed little more than we already knew from previous issues.

Robin 2021 Annual #1 is more reminiscent of the Secret Files and Origins stories of decades ago and was a fun read in that respect. With the exception of Flatline’s story, though, I was left disappointed in the amount of content for these characters. The art is wonderful and vibrant and full of energy, and Cruz complements Melkinov’s style quite nicely.

Overall, this issue was a pretty decent tie-in to the current story which, while not necessary to understand the arc, still serves as a nice though small companion to the world in which Damian Wayne operates.