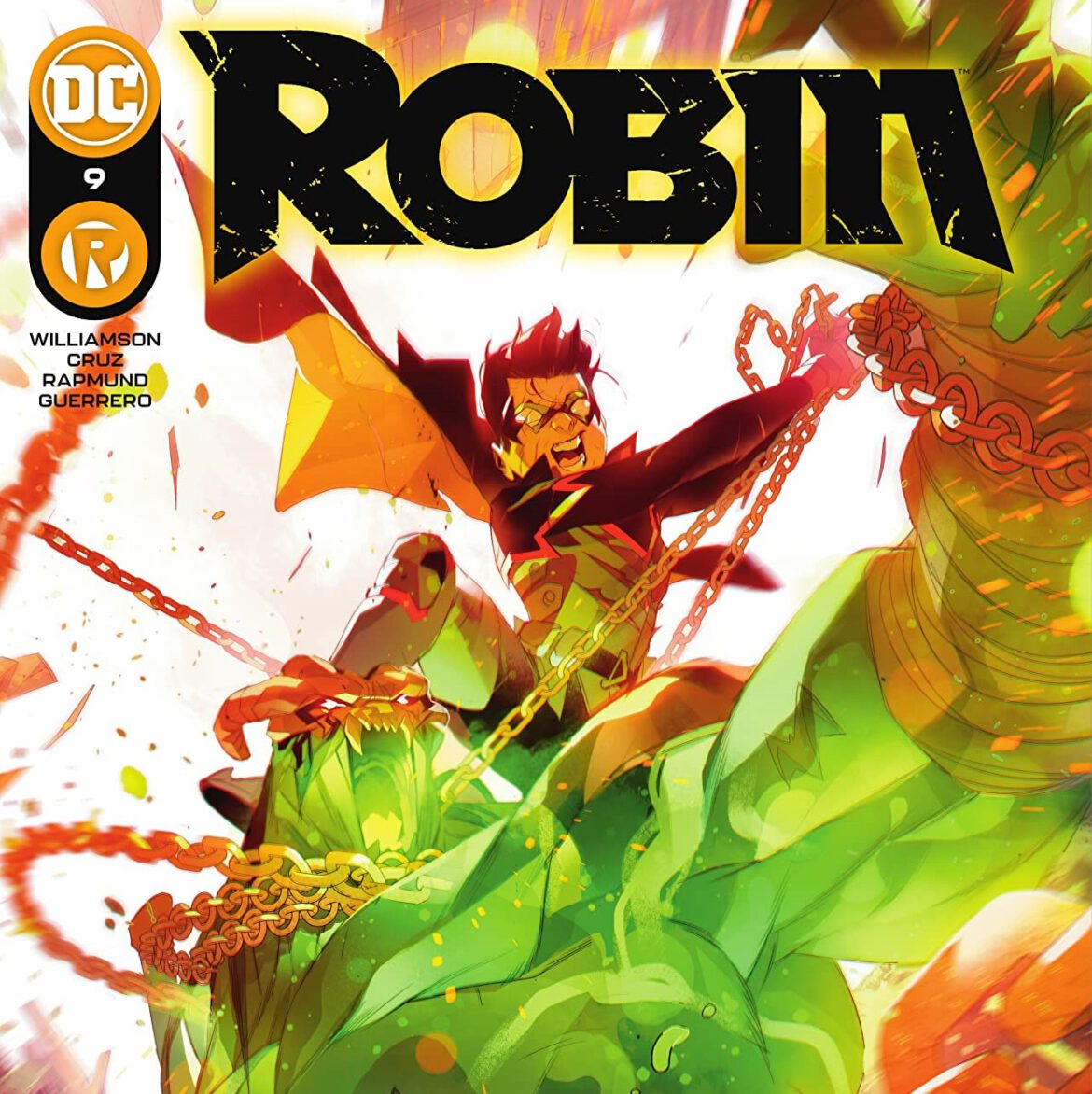 Overview: In Robin #9,  Robin faces off with the Lazarus Demon and his own shortcomings. The Lazarus Tournament ends here, and Damian Wayne will need all the help he can get!

Synopsis (spoilers ahead): Robin #9 picks up straight after the last issue, the Lazarus Demon is ready to merge with Connor Hawke and become the indestructible force that Mother Soul has been waiting centuries for. With every exit off the island removed, things look bleak for some of the best fighters of the world gathered together on Lazarus Island, who are about to become fuel for furthering the Demon’s strength.

Damian Wayne attempts to bring the creature down, but not only is it superior in strength, but its very skin is also hotter than the sun and is practically untouchable. The Lazarus Demon overpowers Damian to exhaustion and defeat. As the monster absorbs Blue Shrike’s power on its way back to Hawke, Robin falls into despair and gives in to failure.

As Lazarus Island burns around him, the spirit of Alfred Pennyworth visits Damian and reminds him of his father’s journey to become the Batman, along with Bruce’s first disastrous attempts that led to failure. Then, his adoption of the symbol of fear and eventual donning of the mantle of the Bat. Alfred reminds him of the small but arguably more important step that a young Bruce Wayne took before beginning the ascent to the man he would become: asking for help by ringing a small bell that summoned Alfred.

As the ringing of the bell’s significance reverberates through Damian Wayne’s head, he finds the strength to lift himself back up and address the rest of the fighters as a Robin reborn. He unites them all together with their shared desires and common goals. He admits to them, and more importantly, to himself, that he cannot take down this overpowering force by himself, but that he needs their help. ALL of their help.

The combatants rallied, Damian directs a strategy that benefits their options the best while keeping the Lazarus Demon from getting to Hawke and fully realizing its potential.

While Black Swan, the Drenched, and XXL distract the creature and keep it unbalanced, Ravager wounds it with her sword. Realizing the demon’s weakness to metal, Damian teams up with Ravager, Flatline, and Respawn to wrap a chain around it and cut off the Demon’s Head.

Mother Soul, in a fury, literally blasts out at her great-grandson with a demonic flame, and Robin finds that he has been teleported away. He finds himself in a desert and is approached by a trio of travelers…..who end up being a younger Ra’s Al Ghul along with his wife and mother. Damian has been sent to his bloodline’s very origins!

Analysis: The concept of fighting your inner demon while literally fighting a demon is a bit on the nose, but Williamson and company do a wonderful job as always with their storytelling in Robin #9. Mother Soul has been plotting for centuries to manipulate the soul of the planet and mankind, and ironically, it’s her own legacy in her great-grandson that proves her downfall.

With Damian Wayne, life has always been about being the best. The most powerful. The most intelligent. Never standing down or giving up. To admit a failure was to BE a failure and to ask for help would be to lower yourself from the pedestal you are entitled to. But when you face off against an immortal and unapproachable demon made of liquid fire, the experience can be a humbling practice for your ego, and Damian wallows in self-pity as the creature of overwhelming pride inside of him dies.

As always, there to pick up the pieces for him, ever ready with the broom of wisdom and the dustpan of love and compassion, was Alfred Pennyworth, the embodiment of superego that has haunted Damian Wayne since Alfred’s death at the young boy’s feet.

Alfred walks Damian through his shared experience with his father like the Ghost of Christmas Past. Damian has always strived to be the power and symbol that Batman is, but Bruce didn’t become that icon through the sheer force of will. It was only at his deepest hour of hopelessness when he understood that his goal was so massive it would crush him that he shed his one-man destiny and asked for support that he was truly able to rise up and claim his mantle.

When I saw the bell and its meaning, I actually teared up. I have always remembered that bell from the Year One storyline, but as with Damian, that detail had been minor and almost forgettable to me. But in that huge, cold, and empty mansion that impossibly small ringing did indeed summon Alfred when Bruce needed him the most, and the loving father figure had come from parts unknown to be by his side. Just as he has with the younger Wayne.

With the blood of villains and heroes coursing through his veins, Damian has always had the best of both worlds, if he were only to choose which side to take. Power or service? Pride or empathy? Guiding shadow or forced brilliance? His personality was the result of his upbringing by the al Ghul blood, but Damian uses that blood to physically (if temporarily) tattoo himself with the reminder that he also shares the blood of a Wayne, and with this demonstration, he shows the world that he is Robin. Then, he gathers the flock together very much as his father would, and soon this makeshift Justice League has cut off the al Ghul uprising and cut off the literal Head of the Demon.

With Robin’s final rebirth in Robin #9, Alfred Pennyworth’s ghost disappears. His job had always been to see his wards on to their rightful paths until they prove themselves self-sufficient, and now that Robin can clearly see his road ahead of him, Alfred is no longer truly needed and can finally be laid to peaceful rest.

No sooner does all of this realization and actualization happen than Robin is set up for his next psychological challenge: witnessing in the truest sense the birth of the al Ghul rise to prominence.

Beautifully illustrated and written, this book closes a door in the coming-of-age story of Damian Wayne and, just as in the real world, flings open a new one that will be sure to also put the maturing Robin to the test. And, as the creative team continues to fill this space with heart, humor, and harrow, I am all on board for the ride.