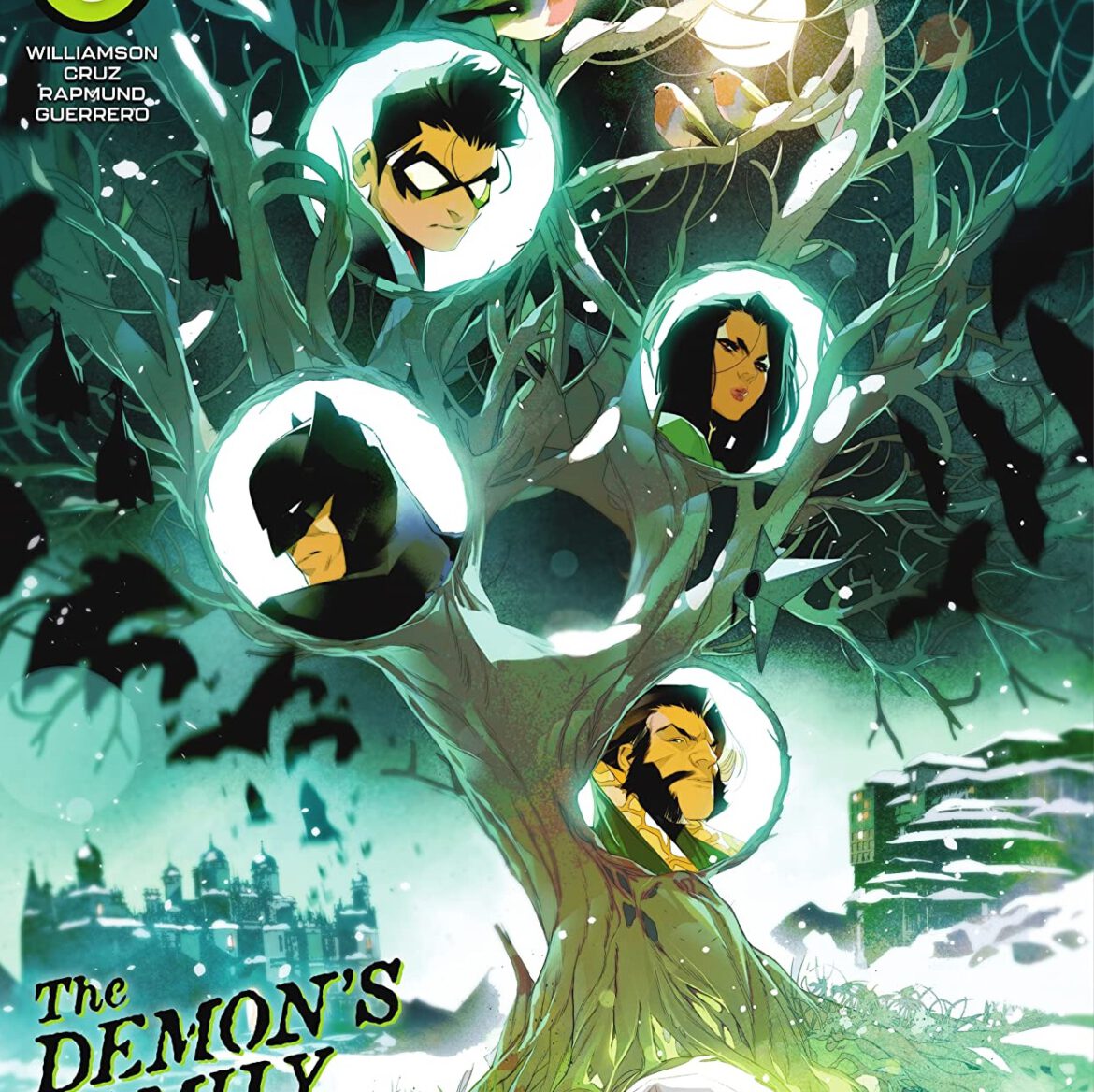 Overview: In Robin #10, Damian Wayne learns his family history and the birth of all three leagues under Ra’s al Ghul.

Synopsis (spoilers ahead): Robin #10 begins lost in time and space, as Damian Wayne finds the mother of Ra’s al Ghul. The old woman is praying to the demon. She shares with Damian that she has secretly written a book. She has been plagued with visions and a sickness. The two are interrupted by Ra’s the Sultan’s personal physician. He is skeptical of his mother’s religion, as he believes in science above all.  She starts to have a coughing fit and dies in Ra’s arms. Damian attempts to comfort the man but is instead grabbed by the throat by the old woman. Suddenly, Damian is Robin and Ra’s does not notice his mother or the boy. Robin realizes that they are really not in the past but in a shared vision with the woman. She wants to show Robin the heritage he is throwing away.

On Lazarus Island, we see that Damian is in a deep meditative state. There is a suggestion to kill the witch but Hawke, with his knowledge of the Shadows, tells Respawn that Robin will die if the woman is killed.

In Damian’s mind, the witch shows him the history of his family after her death. Ra’s started to have visions of a demon himself, but he denied them. Instead, he focused on his science and the creation of the Lazarus Pits to cheat death. Soon his wife, Sora, also dies.  Ra’s continued to deny the existence of any god or demon. Instead, he waged a war against the demon, destroying the city, the people, the history, and the teachings. Finally, he entered the Lazarus Pit and emerged as Ra’s al Ghul and the Demon’s Head. His first act was to place the bones of his mother into the Pit. He also intends to resurrect his long-dead wife as well. The woman emerges from the Pit healed and young, but she has lost her mind and goes on a killing spree. Ra’s tries to calm her down, but she insists that she saw the Demon in the pit. The Demon is alive. The Demon told her that the planet must be purged and allowed to start anew. Ra’s tells her the earth is worth saving, but the woman tells her son that everyone must die. Ra’s formed three Leagues:  The League of Shadows to save the world, the League of Assassins to kill anyone who gets in the way, and the League of Lazarus to search for locations for the Lazarus Pits.

Soon the League of Lazarus started to follow the mother of Ra’s and her faith in the Demon. This led to a civil war with the Leagues of Shadows and Assassins attacking the League of Lazarus. The followers of the witch were only priests, and they were banished to Lazarus Island. Ra’s could not kill his mother, so instead, he cast a spell binding her and the Demon to the island, leaving her and taking her book with him. After centuries of study, the woman learned that they could bring people to the island. They created the Lazarus Tournament every one hundred years. The winner would be fed to the Pit, which would consume the winner.

The woman believes that Damian also can see visions, telling him that the Demon is a part of him. Robin realizes that he is in his opponent’s head, so he attacks her with his greatest strength, getting into his opponents’ heads. This fight severs the connection, and both the witch and Damian wake up on Lazarus Island.  The woman tries to convince Damian that the world must die, but she is interrupted by Ra’s, Talia, and their forces. The battle must continue.

Analysis: Robin #10 gives a history of the Demon’s Head. Not surprising is the strife that is rampant in the life of Ra’s al Ghul. Ra’s belief in science outweighs any faith he may encounter. The story describes the stubbornness of the man, but it also shows that it is a family trait. Damian gets it honestly as both Bruce Wayne and the al Ghul’s are both stubborn.

The art here in Robin #10 is great. For one thing, I did not notice before, all the al Ghul’s including Damian all have striking green eyes. I like that visual of their connection even though they are ethnically not white, but it does separate them from the other people they are around. I like that Damian also inherits this trait that can be traced back to the mother of Ra’s al Ghul. In a way, Damian may be more al Ghul than he is a Wayne. Time will tell where this will lead.

This story gives an entertaining backstory of Ra’s al Ghul and his quest to save and fix the world. This is in conflict with Ra's own mother’s beliefs that the world must burn.