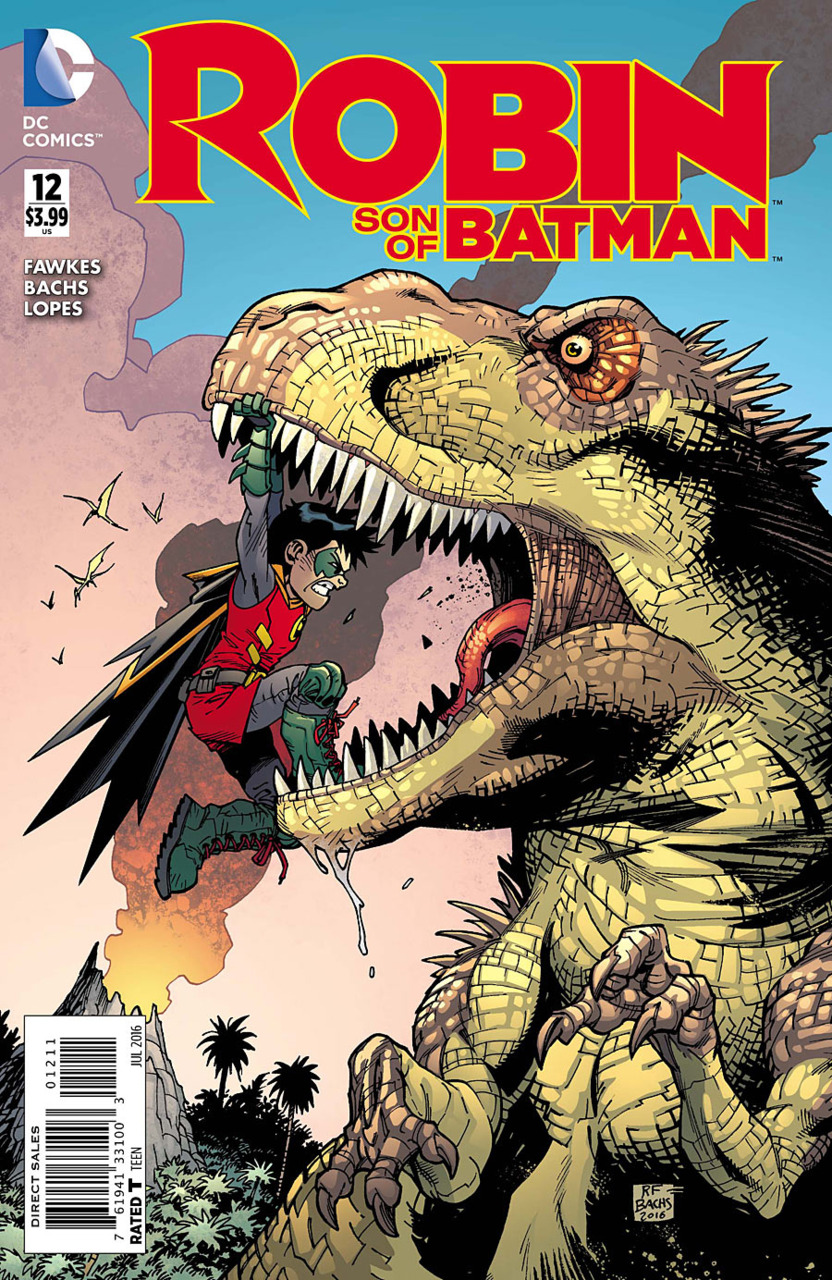 As our issue opens, a pack of dinosaurs (which look like velociraptor), Maya can be seen jumping onto Suren Darga and attacking him. Maya is suddenly shot with an arrow and falls onto the ground…seemingly dead. As Suren orders his men around, we cut to sometime later when Damian, Batman and Talia come upon Maya’s body. Vowing to end Suren for killing his friend, Talia informs her son that it would be impossible for her to die because she immunized her from the Darga clan’s toxins. Suddenly Maya stirs on the ground and thanks Talia for keeping her alive, however she informs them that Suren and his men planted a bomb underneath her…hence why she was lying so still. Batman states that he will be able to disarm the bomb while Robin and Talia go after Suren.

Flying off into battle, Damian sits atop Goliath as they fly towards a volcano. Attacking several of the Darga men atop the crest of the volcano, Damian and Goliath dive into the churning magma and somehow survive. Landing at the bottom of the volcano, Suren is revealed bringing back the final item – the Eye of the Sleeper. Hurling at batarang at his foe, Damian knocks the horned helmet from Suren’s head as the two launch into battle against one another. Calling forth several monstrous wyrms, Robin attempts to stop Suren from replace the green eye in the volcano.

As we see Talia fighting several guards and Batman and Maya beginning their ascent into the battle, Robin continues to battle against the wyrms and Suren. However, Suren manages to drop the creepy eye into the volcano …this would release the dormant magics and grant tremendous power to the Darga Clan. As the landscape begins to change and revolve around them, Damian and Suren battle one another in an attempt to stop the events. As the two battle, we can see flashes of the other heroes from reaching the top of the volcano…in addition, Damian attempts to convince Suren of how his father, Den Darga, is just using his son as a sacrifice. Convinced that he will survive the cataclysmic events, Suren begins attacking Damian and Batman with his newly acquired powers.

Robin finally manages to get through to the young villain…commenting that Den Darga only brought his son back upon his death to ensure Suren would continue until he ultimately died…again. Damian explains that the lazarus heart (underneath the volcano) will destroy everyone. Stopping the swirling, evil magic, Suren turns towards Damian just as the young hero punches him out. With the battle over, Talia and Batman begin arguing about how Talia could have hidden the threat of the Darga clan from Batman and allowed their son to take on the evil all alone. As Maya apologizes for Damian’s parents arguing all the time, Damian comments that he has his family and hugs both Goliath and Maya.

An hour later, everyone is aboard Talia’s yacht and Talia is informing Batman that she will be interrogating Suren for information. As the two are distracted, Damian talks with Maya about how they should kidnap Suren while no one is looking…that way Talia can’t use him for her own needs. The issue ends with Robin, Maya and Goliath as they prepare to kidnap Suren Darga.

It’s getting harder and harder to find good things to pick out from this part of the arc…ever since Ray Fawkes took over the series it just seems to have gone downhill. Although I like that we are continuing the “Year of Blood” storyline, it seems a little weak that our big bad’s plan is destroy the world with magic….can’t we come up with something better?

Also I thought it was a bit of a waste to have the issue take place on Dinosaur Island…other than the pair of raptors seen in the first panel, dinosaurs play almost no part in the issue. Even the cover has a wicked shot of Damian in the mouth of a t-rex…sadly, this doesn’t happen.

Overall this was a pretty uneventful issue…although Robin manages to stop Suren from destroying the world, it seemed pretty anti-climactic. In addition, we will be getting yet another issue to drag out this story as Damian plans to kidnap his enemy so Talia can’t use him for her own needs.

I guess it could be interesting in the next issue, but sadly I feel it won’t be…also we did not get one piece of conversation between Bruce and Damian about Batman’s return. Ray Fawkes…please. Make. This. Happen. Art, as has become the usual, is mediocre.