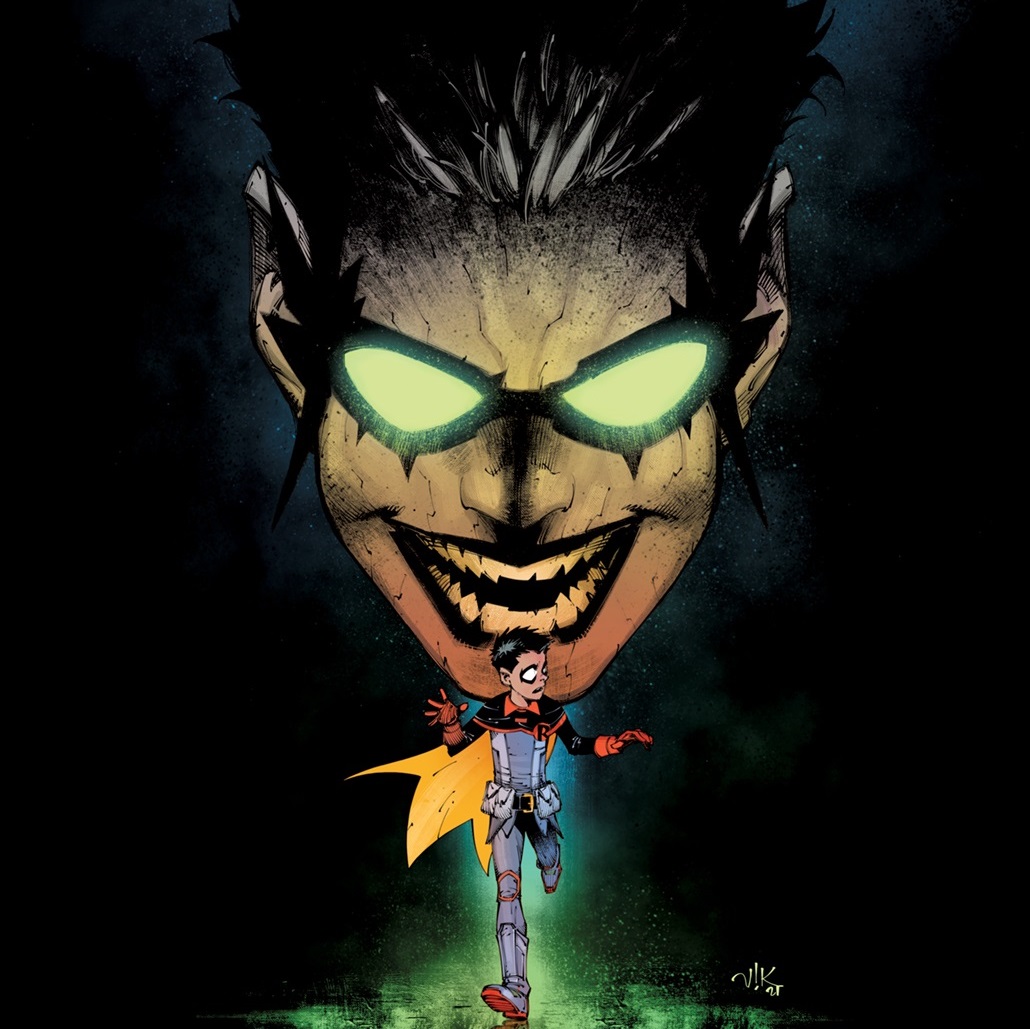 Overview: In Robin #12, Damian Wayne returns to Gotham, but the city is not exactly how he left it.

Synopsis (spoilers ahead): “Demon vs Detective” in Robin #12 opens on Lazarus Island. Damian Wayne is sitting on a cliff reading his manga and overseeing the other fighters leaving the island. He is soon joined by Connor Hawke. Hawke is wondering why Damian has not left the island yet. Damian tells the archer that he wants to make sure the other fighters are leaving safely.

The two discuss each other’s plans. Robin will head back to Gotham but not to talk to his father. Hawke muses that his father, Oliver Queen, and he are not alike at all while Damian says that he and his father are too much alike. Connor says that he is going to stay a few days on the island before leaving for the world. The two part ways hoping to meet each other again and not kill anyone before they meet. On leaving him, Connor asks Damian how he is going to leave the island. All Damian says is that he has an idea, but his mother is not going to like it one bit, in fact, it will probably piss her off.

Talia al Ghul and Ra’s al Ghul oversee the prisoner transport, including Mother Soul herself. She is shouting that the Demon will return and the world will burn. Talia takes it that Ra’s interrogation about Mother Soul’s role in the Lazarus Resin trade did not go well. Ra’s agrees, saying that she is just as delusional as when he left her on the island. Their investigation into the resin will take them to Gotham. Talia, however, is not going to Gotham; she has plans to take Damian with her to the Leviathan Base in Nepal. Talia wants to keep an eye on her son for fear that there might be some lingering effects of Mother Soul’s magic on him. Talia understands that Bruce is no longer in Gotham. Her goal is to convince Damian that he should remain with the al Ghuls and not rejoin Batman. She asks one of her men to ready her airship, but it is gone. Talia immediately guesses that Damian took it.

As Robin #12 continues, Damian returns to Gotham. On his return, he notices changes in the city. He mentions the architecture, but he also senses that the soul of the city is different. He notices that no one from the Bat-Family has approached him, meaning that something is wrong. Damian goes to visit the grave of Alfred Pennyworth. He laments the butler’s death. Alfred was the first person to treat him with kindness and trust. Damian feels that he failed Alfred but with his sample of the Lazarus Resin, he can fix that. Damian hesitates. Someone behind him tells him to go ahead and do it. Damian turns to see a twisted version of himself standing there. Damian recognizes the figure as a lingering effect of Mother Soul’s magic. The entity attacks. After a struggle, Damian is pushed back, and he takes the vial of resin and smashes it into the headstone of a grave. The figure tackles Damian, and he falls into an open grave.

On climbing out he sees a shadow hand reach for him. Damian first thinks that it is Alfred but realizes that the person helping him up is Talia al Ghul. Knowing her son, she knew that he would return to Gotham and specifically he would go to the grave of Alfred Pennyworth. She does not understand why Damian chose not to resurrect his friend. Damian’s answer is that he knows what the effects of the Lazarus resurrections are, and he will not curse Alfred with that. Talia changes the subject, which infuriates Damian. He tells her that all he was to her was a weapon. Talia tells him that she is rebuilding the al Ghul empire, and she wants to correct her past mistakes. Damian takes it that she is there to fight him to the death, which surprises the woman. Damian tells her that because of both of his parents, he will never have children; he would never subject them to their life.

He swings on her, and she just dodges his fist. Talia tells her son that the cycle can be stopped. Damian is right about the family, but together they can break that cycle not using Damian as a weapon but as her son. Damian tells her that he is open to that, and the two leave the cemetery; they do have a small conversation about Flatline. Talia does not like her, and Damian does not care and tells her so. He does like her.

In Tokyo, Flatline is approached by Lord Death Man. He asks her if she kept it. She produces a heart in Lazarus Resin. It is assumed that this is the heart of the Demon.

In an epilogue, Talia and Damian are seen on Talia’s airship, but it is a voiceover of Mother Soul and Ra’s al Ghul. She tells her son that he is dying. The story will be continuing in Shadow War Alpha #1.

Analysis: This is the typical cool-down issue between events, in this case, the Lazarus Tournament and Shadow War. I absolutely love the focus on the al Ghuls in this series and in Robin #12 in particular. It is my personal opinion that Ra’s al Ghul is the real foil to Bruce Wayne and not the Joker. The goals of both characters are in essence the same, justice and the betterment of the world, but the methods of the two characters are completely different. Where Bruce wants to fix the brokenness, Ra’s wants to purge the brokenness while keeping that which is just, which is in opposition to his own mother’s desire to see the world burn. It is possible that Mother Soul could be Ra’s version of Joker. This is shown in how that character is drawn.

The times we see Mother Soul in Robin #12, she is shouting nonsense about the world burning at the hands of the Demon, but she is also shown with a Joker-like expression on her face, especially in the conclusion of this issue. It is reminiscent of the Joker, who wants to see the world burn in his own right. This interaction has so much more at stake when it is about family.

That is what the main theme of this issue is; family. Damian returns home to visit the one person he considers to be family. A man that many of the Bat-Family looks up to as more of a father figure that Bruce Wayne himself, Alfred. It is clear that Damian had the intention of resurrecting the old Wayne butler, but I think encountering an unhinged version of himself generated by the latent magic of Mother Soul visually and tangibly showed that he should not use the resin to resurrect Alfred. He even tells his mother that he too has experienced the maddening effects of the Lazarus resurrection that she, as well as her father, her grandmother, and even Jason Todd, has experienced. This brief encounter with himself opens Damian up to the possibility of family and the dangers but also the rewards of that relationship.

I am personally happy to see that Flatline is not being forgotten. It is shown that she will pop up again, but I do have an expectation that she may become more of a part-time friend of Damian’s like Selina is to Bruce. I am not really sure how I feel about that, but it can provide some dramatic elements to their story. I just hope that it will not be Cat-Bat lite.

The art is absolutely gorgeous in Robin #12. The details are exceptional. Most of the scenes in Gotham are at night and raining. The colors as usual are muted to show the darkness, and the characters look wet. Damian even comments that the figure of himself that he confronts is noticeably dry, and the art shows exactly that. Damian is wearing his hood over his head, and the water is cascading off of his cloak while the figure is noticeably drier.

This issue furthers the relationships of the al Ghul family, especially Talia and Damian. It provides a great mini contrast with the relationship of Ra’s and his own mother. Things look positive for Damian and Talia, not so much for Ra’s and Mother Soul. The storytelling is insightful and intelligent and the art is absolutely gorgeous.