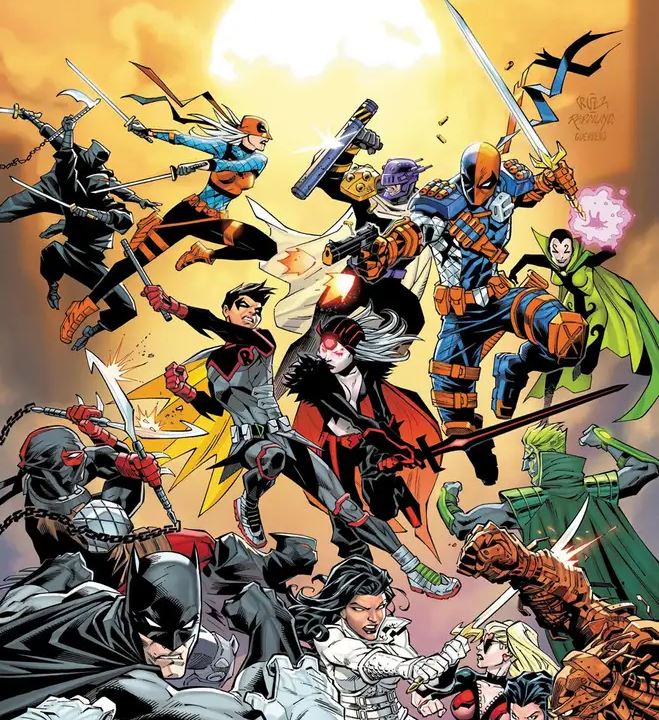 Overview: In Robin #14, all the players have arrived at Nepal as the assassin is revealed, and Deathstroke is finally taken down.

Synopsis (spoilers Ahead): As Robin #14 begins, Batman and Robin arrive at the ruins of Batman Inc.’s safe-house. Batman grills Ghost-Maker about what happened, and the two quickly begin arguing. Robin goes off on his own. He interrupts the grownups by saying he knows where exactly the Secret Society went.

The next page is the battle of Nepal: Deathstroke Inc. versus the League of Shadows. Angel Breaker tries to get Talia al Ghul to safety. Talia declines; she will face off with Slade Wilson, and the two jump into one-on-one combat.

Aboard the Ghost-Stream, Batman Inc. make their approach to Nepal. Batman and the team don Bat-Gliders. These contraptions will allow the team to arrive undetected by both Deathstroke and Talia. Robin, however, is not wearing one. Batman tells him that he is not going. This infuriates the boy, and Robin immediately argues, saying that Bruce blames him for Alfred’s death. Batman says that Alfred was never Damian’s fault. It was his, and he wants his son safe. Robin tells his father that he has to trust him and jumps out of the plane. Ghost-Maker likes this, and Batman jumps out after his son, catching him before any of the combatants can see the commotion above them. Batman and Robin land in the middle of the fight shortly followed by Batman Inc. Angel Breaker squares off with Ghost-Maker, and Robin rushes to find his mother.

A Shadow is ready to pounce, but he is quickly dispatched by Ravager. She tells Robin that Respawn is dead, and Batman in hearing this tries to comfort his son, who brushes him off and runs to find his mother.

The fight between Deathstroke and Talia is savage. Both are wounded, and it appears that Deathstroke finally has the upper hand. When Slade threatens Robin, this gives Talia a second wind, and she goes on the attack only to be seemingly beaten until she stabs Slade in the gut with her dagger in between his armor plates. Robin, Ravager, and Batman arrive just as Slade falls. Batman asks Talia what she did, and the mystery assassin arrives. Talia goes to kill this imposter, and Nepal is seemingly hit by an earthquake. The man rips off his costume to reveal himself as Geo-Force.

Analysis: First things first, what is this reveal? Why Geo-Force? To me, this is reminiscent of the Millennium payoff when it was revealed that Monarch was Hawk. This really makes no sense to me other than the Outsiders reference. It is set up great though. The accent that was mentioned in the previous Deathstroke Inc. issue and the earthquake suddenly striking Nepal is an interesting way to reveal and introduce Geo-Force, but I am again left with why?

There is still good development of the relationships of Batman and Robin here. Batman goes to his usual stance of protecting the boy, and at first, Robin lashes out. After hearing Batman’s explanation, there is a softening in Damian and it looks like Batman is enjoying this time with his son. That joy is quickly lost as they find that Talia has killed Deathstroke.

I actually prefer the art in Robin #14 and the other issues in the series over the rest of the arc. The art is cleaner and crisper. It looks more finished than the scratchy style of the other books in this event. One interesting detail I find is that when the assassin makes his appearance after the earthquake, Rose is the only character not looking at the newcomer. Batman, Talia, and Robin are looking in his direction with shocked looks, but Rose is looking to the side in front of Robin. Her arm is in front of Robin’s arm. What is she looking at?

The action heats up as the final battle begins on the shores of Nepal. The war started on the doorsteps of the Secret Society, and it seemingly will be ended at the base of the League of Shadows. A new threat has been introduced, and Geo-Force is that threat. His target all along has been Deathstroke, the man behind the death of his sister years ago.