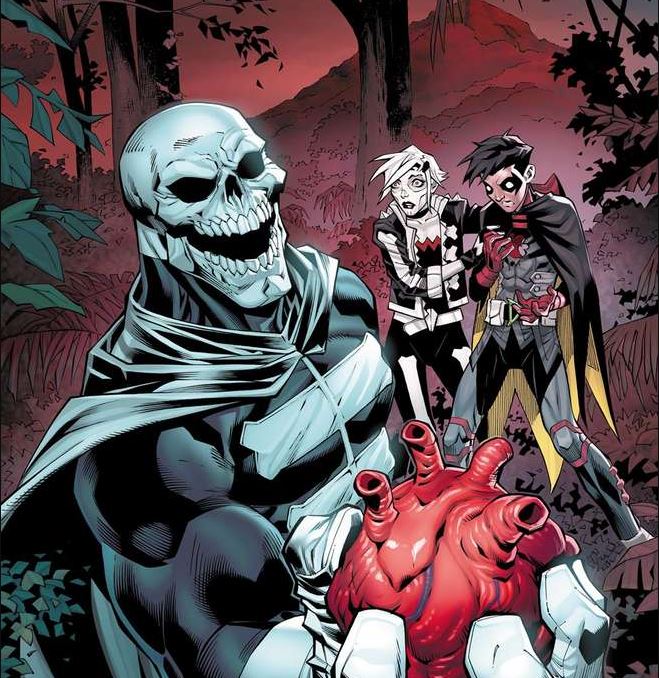 Overview: In Robin #16, our hero faces betrayal and lies from the last place…wait, no, the first place he should expect: villains!

Synopsis (spoilers ahead): Robin #16 begins on Lazarus Island, nightmares of Respawn blaming Damian Wayne for letting him die wake the young Robin, as Lord Death Man’s pleas for someone to kill or torture him torment the whole island. Damian and Connor Hawke interrogate the villain, who claims Flatline betrayed him – which the two heroes instantly recognize as a trap.

While pondering what to do, Damian greets the many people who want to leave the endless wars started by people like his mother and grandfather, including his cousin Mara (from Teen Titans Rebirth).

In Tokyo, Robin and Hawke find many of Lord Death Man’s lairs destroyed, and Jiro Osamu, the Batman of Japan, accosts them. Jiro tells them he’s left Batman Inc. (though he’s on the recently revealed cover for that series starting in October) due to conflict with Ghost-Maker. In the latest of Lord Death Man’s destroyed lairs, they are attacked by a robotic Oni, but when Damian figures out the control system and destroys it, he falls into the second trap, meeting Flatline in the under-lair. As she teases him and says she’s taken over Lord Death Man’s gang without violence, Jiro and Hawke arrive, and she realizes Lord Death Man wanted to take control of the giant Skull Mountain of Lazarus Island.

Analysis: Joshua Williamson has had the reigns of the DC Universe for the last couple of years, starting with his heavy work during Death Metal, leading into Infinite Frontier, and now reaching its (supposed but probably not really) climax in Dark Crisis (on Infinite Earths, as DC announced at Comic Con this past week). As such, he’s been writing an enormous number of titles, all interlocking and leading into each other – and sadly, too many of them suffering from feeling like they weren’t standing on their own as satisfying stories. This was particularly the case with Batman, a shame since as DC’s most beloved and most sold title, it could have been a really great showcase for Wiliamson’s talents. However, in Robin, Williamson found a book where that exactly fit his desire to throw all of the obscure pieces of the DC Universe into a YA friendly adventure story.

Damian Wayne, struggling through a long period of editorial dictates starting with Adam Glass’ Teen Titans run, finally got to stand on his own two feet again as Robin, the DC Universe’s best sidekick role. And the title has been truly fantastic – taking paths of exploring Damian’s relationship with his mother and grandfather and adding to the lore with the League of Lazarus, Mother Soul, Damian’s grandmother, and bringing back and using a huge number of characters like Jiro (sadly misspelled in this issue), Lord Death Man, Mara al Ghul, and Connor Hawke. While it is a shame that Williamson is ending his run before he could get to the dozens more plans he hinted at (exploring Maya Ducard from Robin: Son of Batman and so many more), this series will stand as seventeen issues of well-crafted YA action-adventure with really solid art, starting with the excellent Gleb Melnikov and ending with the strong Roger Cruz, doing a quite decent impression of Melnikov’s distinctive impression of Greg Capullo. Inker Norm Rapmund and colorist Luis Guerrero provide old school craft to this new school issue with Robin #16.

For this episode of the ongoing series, Williamson brings perhaps his most interesting creation, the sidekick hench-villian Flatline back into Robin’s life as Flatline’s main villain, Lord Death Man, launches a plot with Damian’s grandmother to do more nefarious things. The stakes don’t seem particularly high, perhaps unfortunate given the series is ending, but the warmth and amusing genre-savviness of the heroes is very entertaining. One hopes that Damian, Hawke, Flatline, and the other cast members find writers who give them similarly enjoyable roles after this series ends. All in all, it’s a well-crafted setup for the final issue of the series, and hopefully Williamson can stick the landing as well as he’s written every other issue in the run.

Our main cover for Robin #16, by the final series artist Roger Cruz, shows Lord Death Man holding Damian’s heart given to him by Flatline in a very gruesome image, Robin and Flatline stand shocked in the background. The main cardstock variant is by Simone di Meo and is surprisingly very mellow, considering di Meo’s typical frenetic, off-kilter framing and posing, showing Batman and Talia in a romantic pose together on a gargoyle, with Damian looking out behind them. Dan Schoening paints the incentive variant, featuring a Batman 66 television show style rendering of Damian, Connor Hawke, Ravager, Flatline, Talia, and Batman as they battle various rogues including The Joker and Riddler – with sound effect blasts all over the cover! Though the concept is clever, Schoening’s execution of the linework is a bit less appealing than when Mike Allred did the Batman 66 spinoff comic.

As Damian prepares to head out on his next adventure in the DC Universe, Williamson gives a warm second-to-last issue of this excellent series, highlighting the characters and relationships he’s built up over the past year and a half.