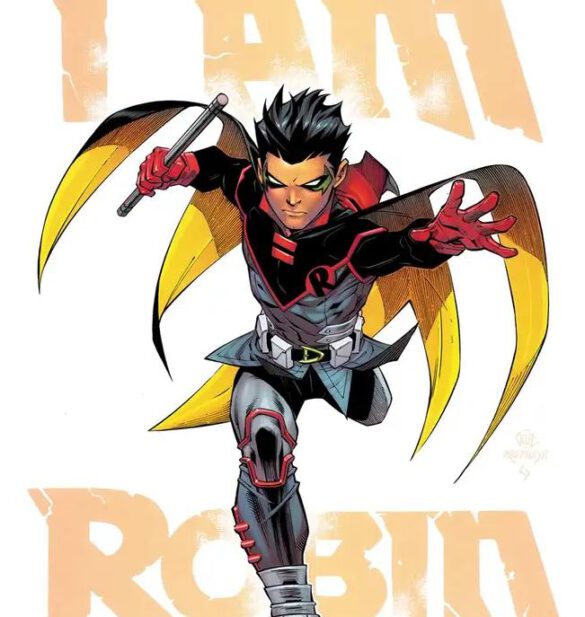 Overview: A low-stakes but very warm ending awaits our hero, but darker adventures await in Robin #17!

Synopsis (spoilers ahead): Robin #17 opens with a flashback of images from throughout this series, Alfred’s ghost asking if Damian knows who he is now. On jet skis, Damian, Flatline, Connor Hawke, and Jiro, the Batman of Japan, race to Lazarus Island. When they arrive, Damian’s cousin Mara tells them Lord Death Man escaped.

As Lord Death Man and Mother Soul make out (gross, but hilarious!), then the regenerating villain gives Damian’s great-grandmother her great-grandson’s heart, stolen by Flatline many issues ago. Mother Soul reveals her plan to destroy the world with the demon Nezha, breaking her deal with Lord Death Man to make him truly immortal, not just using Lazarus Resin, and attacks the villain.

In the forest, Damian and his friends hear Lord Death Man’s cries and are attacked from a cave by a Lazarus Resin mutated Lord Death Man. The now huge villain tosses the heroes (and villains) around a bit, but Damian quickly rips out his heart, and he and Flatline trade quips about the villain resurrecting again. Damian hears a spooky voice calling his name from the cave, but ignores it to have fun with his friends on the beach, montage style. At the end of the day, he finishes his manga, which has a heavy-handed lesson about following one’s heart instead of victory, and Flatline sits down next to him. The two talk about the future of their relationship, and Damian says he has to explore the secrets of the island. Behind them, the shadowy figure of Respawn appears to lurk in the jungle.

Damian watches Flatline leave on her Lord Death Man ship, then bids farewell to Connor, off to find his father Green Arrow. Damian tells Connor he’s still trying to figure out who he is as he leaps into the future, an image of his family and friends behind him.

On the final page, Damian explores the cave, finding a mysterious temple beneath the skull mountain…

Analysis: And so, as all good things must, Robin comes to an end with Robin #17. It lasted longer than the last solo Robin title (which was actually called Robin: Son of Batman, part of the DC You branding in 2015, and was really a spiritual continuation of the New 52’s Batman and Robin title). Still dwarfed tenfold by the sheer length of Tim Drake’s solo series, Damian nonetheless managed to provide nearly a year and a half of excellent storytelling, marred a little by the messy Shadow War crossover. So, how does his final issue (for now) hold up?

Well, it’s not quite as solid as the first year of the book. The plotting for the Lazarus Tournament was much tighter (despite being paced out longer than this reviewer thought it should be), and the stakes and structure led to the payoff to that arc (in issues #9-10) feeling much more powerful and meaningful. It’s very warm and friendly seeing Damian’s last year of adventures being referenced throughout Robin #17, but it doesn’t really develop too much, and the short battle with Lord Death Man feels too much like the kinds of cutesy fights that mar too many comics aimed at kids these days rather than a serious battle.

That fight does highlight one of the structural flaws of the series for me, though – Damian being given opportunity after opportunity to kill without consequence – first in the Lazarus Tournament, with triple resurrections available, and now with an infinitely resurrecting villain. I understand the motivation – Damian was trained as a lethal assassin, and seeing him really let loose can be very fun – but his struggle to live a moral life and protect others rather than indulge in his own selfish and arrogant impulses to do what he thinks is best seems like a bad move for his moral development. That weakness aside, the series has done a really good job of giving Damian a strong supporting cast – similar to Robin: Son of Batman. Hopefully the next several years will see these characters pop up many times, especially Connor Hawke and Flatline. Original series main artist Gleb Melnikov provided a powerful stylistic template for the other artists on the book to follow, and Roger Cruz, who took over as main series artist when Melnikov left, gives a very solid pastiche of Melnikov’s style and designs and has a very enjoyable storytelling skill himself. Though not quite as memorable or daring as Melnikov, Cruz does a very fine job of showing all of Damian’s world and characters, and his rendition of Damian’s new gray Robin design is quite appealing.

It is quite a pity that Williamson had to end the series before he was able to bring back Maya Ducard, as he promised on Twitter when the series was first announced (he said his plans ran out of time, sadly). The strongest original character from the series, similar to Maya, is Flatline – a great backstory, strong look, and intriguing possibility for the future. It speaks to how strong Damian’s concept is that both series provided him with a strong female supporting member who struggled with a redemptive arc due to their own dark pasts and connections. Whatever the future holds – Damian probably can’t age up too much, meaning his relationship with Flatline probably can’t go too far for quite a while – their banter is quite fun, and their conflicting motives provide plenty of drama potential. I hope to see it play out one of these years.

Lastly, the ending of the series explicitly promises to lead directly into the Batman vs. Robin miniseries starting next month, written by Mark Waid and drawn by Mahmud Asrar. We shall see what that miniseries brings to Damian!

Roger Cruz draws the final cover for our series, a stark white background with the words “I AM ROBIN” behind our hero in his new costume, running towards us with a short baton in hand. While not the best cover the series has had, it’s a very vivid, memorable image, interestingly in contrast to the typical “canceled series” covers with the full cast featured. Simone di Meo paints the cardstock variant, much less triumphant looking, with Damian being attacked by the demon Nezha, foreshadowing the Batman vs. Robin series. This variant is very horror-inspired, with a sickly green color dominating to reflect the demonic Lazarus Pit theme. Clayton Henry draws the incentive cover variant for Robin #17, a full-page image of Damian’s face with a stern expression, the left side showing prominent images of Damian’s history – his meeting his father for the first time, his death at the hands of the Heretic, his mother and father dancing, and his own kiss with Flatline.

Though the final arc doesn’t quite provide the power of the first year of the comic, Joshua Williamson and Roger Cruz give a warm, satisfying ending to Damian’s tropical adventures and a teaser of what’s to come for the Boy Wonder.