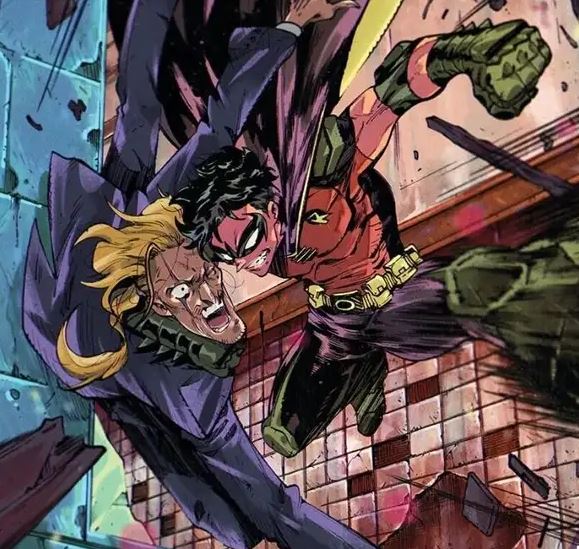 Overview: In Tim Drake: Robin #1, Tim strikes out on his own to discover who he really is, but he is faced with one of his unsolved prior cases. His past has a way of catching up to him.

Synopsis (spoilers ahead): As Tim Drake: Robin #1 begins, it is nighttime at the Gotham Marina, and Tim Drake is getting acclimated to his new home away from the family. The crow calls, and Tim has the unease of someone behind him. He is right; the person behind him is his boyfriend Bernard Dowd. Bernard is here for his date with Tim, and the two settle down for some burgers and are soon interrupted. Two ladies from the marina are passing out flyers for a fundraiser.  They invite Tim and his boyfriend to the event.

Tim is musing about how Bernard makes him feel like himself and what the other members of the family would think of the place. His reverie is interrupted by Darcy Thomas. She was a Robin initially, whom Tim was not too close with, but when he moved, she was always there to help. Tim had invited Darcy to hang out and show her his new boat. Their conversation is interrupted by sirens.

The two ladies we met before are both dead. One was even decapitated. The neighbors think it might have been an accident, but Tim is not so sure. We also see that the police sent Detective Williams to investigate. He is not the only one, as Tim arrives at the scene dressed as Robin, along with Darcy in a mask herself. Robin called Detective Williams.  After a back and forth involving the lack of trust in the police and Williams declaring that he is not Robin’s “Fairy Gayfather,” Williams is introduced to Darcy, who is going by the codename Sparrow.

We get a rundown of the evidence on the scene, but Robin focuses primarily on a tuft of hair.  Robin analyzes the hair and identifies it as the fur of an orangutan. Robin connects this with the mystery story “The Murders in the Rue Morgue.” Robin runs off, telling the others to keep it busy, confusing both Sparrow and Williams. A glowing orangutan materializes, Sparrow grabs her wrenches, and Williams draws his sidearm. We get a brief description of the story as well as a recap of a previous case involving a similarly glowing elephant connected with a mystery story (as seen in DC Pride: Tim Drake Special #1).

Robin tracks down a white disc. He grabs the disc, and Williams and Sparrow start fighting the ape. Robin surmises that the disc is a transport device and destroys it, but now he is left with the problem of getting rid of the manifestation.  The beast in the story was captured in a zoo. However, there are no zoos nearby.

Sparrow shouts at Robin to get him out of his thought process. He does not know how to end this story. Sparrow tells him that it is his story to end. Robin is inspired; he pushes Williams away, grabs an object, and stuffs it in the ape’s mouth. The ape disappears, ending the threat.

Afterward, Robin and Darcy are seen cleaning the boat and talking. Tim tells Darcy about the previous elephant and reveals that he used the strait razor to dissipate the ape. Tim realized the orangutan wanted to be human, so he gave the razor to it, making the primate think that it was a man and that caused it to disappear. Tim tells Darcy that he has no plans to share with Bernard that he is Robin despite Darcy’s protests. The story ends with Tim discovering a mysterious package with a note.

Analysis: We get a little more of the relationship between Bernard and Tim. Tim is still trying to figure himself out, but he is still going with the relationship with the realization that Bernard is helping him be himself. There is a contrast between Darcy and Bernard, two of the side characters in this book, and the established Bat-Family. How would they all react to the changes in Tim, including his choice of living accommodations?

The story continues the Teen Titans story told in the DC Pride special from June.  We get no advancement in the plot except the connection of animals and old mystery stories. There is not any detail of who could be behind this except that this person may know the dual identity of Robin and Tim Drake. The note attached to the package was a congratulation and calls the recipient of the package “gumshoe,” an old slang term for a detective.

I am really not a fan of this art, and I am not sure that it is appropriate for the violence in the story. Most notably is the panel showing the two women dead, one woman is clearly decapitated, and this cartoony style does not give that scene justice unless it is to minimize the violence of the scene.  If so, then why was that shown in the first place?

I am not a fan of how Bernard is drawn in Tim Drake: Robin #1. In the previous showings of this character, he was not drawn as overly masculine, but he was definitely identifiable as a male. Riley Rossmo definitely feminizes Bernard in his presentation. He looks like a girl from the way his lips and hair are drawn and his choice of torn jeans. If not for the text identifying him as male, it would give the appearance that Bernard was female. If this is to sanitize the relationship, I am not in favor of it. The use of heart drawings throughout implies romance, and there is nothing wrong with male-on-male romance. I would like to see this changed or possibly give another aspect to Bernard.  He could be nonbinary or gender fluid, but that is not really alluded to other than the artistic presentation.

I see positives in this presentation. However, I would like to see a clear direction for Bernard’s character. I found myself more focusing in on the characters, which is suitable for the first outing of a new book. The reader has to get to know these characters, and the orangutan is the action to bring excitement.