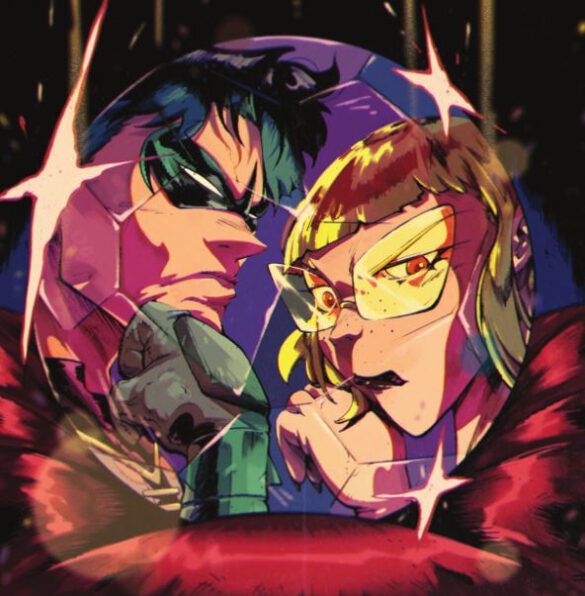 Synopsis (spoilers ahead): Tim Drake: Robin #2 opens with Tim and Bernard on a date.  Tim, as usual, is lost in his thoughts.  He wants to share his life as Robin with Bernard.  This time it is manifesting as a stalker of the Waynes.  Tim is trying to get Bernard to leave town.  Bernard insists that Gotham is never safe and wants to stay to figure things out with Tim.  Their conversation is interrupted by a bulletin; Robin is accused of stealing the Baseball Diamond.

Tim goes to the museum to investigate.  He finds that GCPD has sent the most inept cops they have.  Tim even named them the three stooges.  Not all is lost, as Detective Williams was sent as well; at least Tim has an ally.  Tim drops a note in Williams’s pocket to meet him outside.

Williams steps out back and finds Robin, who explains that he did not steal the diamond.  Tim explains to Williams the clues he found earlier and suggests that the museum cleaning team should be investigated.  Williams tells Robin that the cleaning was outsourced and the address given was of a library.

Later Tim is with Bernard at the Marina.  Bernard believes that Robin is innocent, but that is not the only issue the two young men face.  Two women bring the two an eviction notice from Councilman Rathbone.  He is declaring the Marina as being a home of dregs, and as a result, it must be shut down.

Robin is seen with Sparrow.  The art has them dressed as fictional detectives, including Sherlock Holmes, Dick Tracy, and Shaggy.  This montage is interrupted in the library, Robin and Sparrow in costume are investigating the crime from the standpoint of fictional detective stories.  Robin starts looking at the checkout records in hopes of identifying what the next crime might be, but they are interrupted by a scream.  The librarian was just killed.  Robin finds a juggling pin, and the police responding to the screams, find Robin and Sparrow.  They go after Robin, thinking he committed the crime.  Robin escapes and rendezvous with Sparrow and Detective Williams.

They meet a young boy at the church.  The boy calls himself Gus, and he is carrying a bat for protection.  He asks if Robin is really a criminal.  Robin tells him no, and he is interrupted by Sparrow, who asks if he was going to steal the boy’s baseball bat.  Detective Williams leaves, and with the help of a stained glass window, Robin deduces the story that they are living this time.

We follow Gus as he goes to a bank and, more specifically, the safety deposit boxes.   Robin beats the boy, and the star-eyed boy pulls out a knife and tries to slash the hero.  The chase is on, Robin has to catch the boy and elude the cops, that believe the detective is assaulting the boy.  This proves easy, and Robin catches up to Gus.

Gus tells Robin that a man asked him to pick up something from the box, and if he does it he will be taken care of.  The idiot cop is still after Robin.  Tim radios Sparrow who was disguised as the bank employee.  She actually has the package Gus was after.  She goes to get Gus to safety.  Robin’s plan is to ditch the police tail and meet at the boat to plan their next move.  This is interrupted as Robin is ambushed by a gang of Robins with firearms.

Analysis: Tim Drake: Robin #2 was all over the place.  I had a hard time following where the characters are.  In one scene, they are in one place, and in the next, they are somewhere different without a caption of where they are located.  As far as any explanation of the direction of the story, there really is none here.  I like the idea of not using a glowing animal, but without that common thread, there really is not much of a connection with anything.  More time is devoted to Robin being considered a criminal and therefore being hunted down by the most inept cops and detectives in Gotham.

I am really not digging this art style.  The art really does not help with the flow of the story.  The montage page showing Robin and Sparrow dressed as Sherlock Holmes, Dick Tracy, and Shaggy and Velma really made no sense for the story.  There is a link to these fictional detectives, but their use just adds to the confusion here.  Is this sequence in the character’s heads, or is it real.

I get the impression the art, along with the design of the three cops, is supposed to be a comedy element.  I actually do not see this as comedy relief, true the deaths depicted are very brutal and, therefore, very personal, but the use of the idiot detectives with their visual depictions is inappropriate and takes away from the gravity of the story.

This is supposed to have a very serious element in it.  Tim continues in the caption boxes to describe how he wants to find himself, but he keeps pushing Bernard away as a means of protecting him.  In one box, Tim says that he wants to share his life with Bernard, but in his dialog, he is pushing the young man away.

I do not like the design of Bernard.  He continues to be drawn with feminine features as well as feminine clothes.  This would make sense if there were gender fluidity, but I cannot find any evidence of that with the interaction of the other characters, and I am afraid this is to sanitize this relationship.  I cannot help but think if this were a lesbian relationship, these design issues would not have been made.

I am falling out of the story, and I am focusing more on the design of the characters.  The design is not helping me stay in the story but is creating a sensation that I do not care about. I am growing more and more disappointed in the direction of this story, and I am so hoping for an improvement.