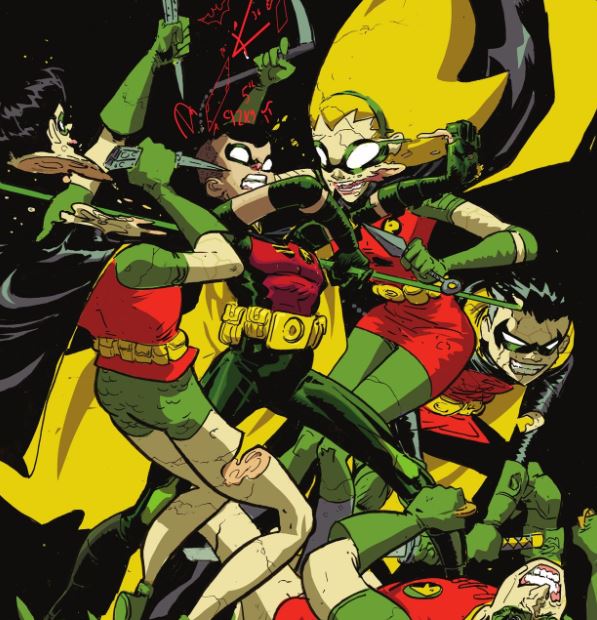 Overview: In Tim Drake: Robin #3, Tim is forced to fight his family as the story takes a turn into horror.

Synopsis (spoilers ahead): Tim Drake: Robin #3 begins at Gotham Marina, as Tim Drake Robin is now faced with his past and future.  Dick Grayson, Jason Todd, Stephanie Brown, and Damian Wayne, all dressed as Robins themselves, are in a fight with Tim Drake, also dressed in his Robin costume.  The unusual thing is that all the Robins attacking Tim are using lethal weapons.  Dick and Jason are using guns, while Steph and Damian are using knives.  Tim notices that their voices are not on point, but their fighting styles are correct other than the added weaponry.

Tim is still holding back, but his adversaries are not.  Tim tries to talk himself into going all out.  To start, he takes out the most dangerous opponent, the two pistol-packing Jason Todd.  When Tim brings Jason down, he notices that Jason’s muscles exploded into clay.  His thought process is interrupted by the attack of Stephanie and Damian. They slash Tim with their knives, but a bystander stumbles upon the battle.  This confusion gives Dick the opening to open fire on the newcomer.  Tim flips out of Steph’s hold and uses his Kevlar cape to stop the bullets.  Tim uses his grapple line to bind Stephanie and Damian to each other.  He then kicks both into the harbor.  Throughout this battle, Tim realizes that he knows how to take out his family.  This realization does not sit well with him.

This leaves just one adversary, Dick.  Dick, also made of the same type of clay as the others, has grown in size and snatches the poor woman.  This forces Tim to use a little more finesse, but he knows that Dick has the simplest style.  He is a circus performer, so he hides his style behind a dramatic flair.  Tim uses his own acrobatics to free the woman from Dick’s grasp.  Dick then tells Tim that the boss has big plans for him and he has all the clues he needs.  Tim uses his smaller size and agility to bind up the grotesquely large dick Grayson just as the police arrive to mop up.  The cops have already fished out the melting Steph and Damian.

The residents of the marina stand up to the cops giving Tim the chance he needs to hide out, but he is wounded from his fight.  He hears another voice call Robin’s name.  It is Bernard.  He wants to help Robin, crediting him for his relationship with Tim Drake.  He leads the wounded hero to Tim’s boat, of course not realizing that Robin is Tim Drake.  Bernard shares with Robin his time with the Chaos Cult and what lead him to seek them out in the first place.

After Tim takes a shower and dresses back in his uniform, he notices that it is too tight, like it doesn’t fit.  He forgets this when he notices that Bernard is lost in thought.  Bernard confesses that he is worried about his boyfriend.  He wants to be there for him, but he fears that Tim will always sacrifice himself before looking at what is in front of him.  Bernard hands him a note and heads to work.

Alone now, Tim reads the note and then analyzes what he knows about this case.  Elsewhere the only “Robin” to escape, Jason Todd limps to Colonel Moran.  Moran yells at the creature, telling him to keep his voice down.  Jason just says that he wants it off of his body; it is burning his skin.  Moran tells Jason that it is impossible, and then Jason wants to talk to the boss.  This is interrupted by a clay beast waking up and yelling Tim Drake.

Analysis: The art is starting to make sense after Tim Drake: Robin #3.  This story is becoming a horror type of story with body horror, among other fantastical elements.  The overall style is making more sense with this tonal change.  What started as a standard mystery with gore and some mystical elements has become a full fledge Frankenstein type of story, making this style fitting for this type of story.

Again I have a complaint about the design of Bernard.  He is still looking very feminine.  His facial features are softer, and the overall shape of his face is feminine.  His clothing even has a feminine flair, including the addition of a fanny pack around his waste.  I do not have an issue with this choice if this is his character, but again there is no mention of allusion that this character is transgender.

I am liking the relationship between Bernard and Tim.  Bernard consistently refers to Tim as his boyfriend, and it seems like every time Bernard says this, it is surprising for Tim to hear. I get the sense that it feels right to him, and I am liking that added detail.  The Bernard and Tim interaction is a welcome change and diversion for an entirely action-oriented story that focuses on the inner thoughts of Tim Drake.  The only self-talk we see in Tim during the fight is his analysis of the techniques of all the other Robins and his knowledge of how he can take each of them down, which is an interesting dichotomy.  In the opening page, the attacking Robins chide Tim for being a detective when in fact, it is this knowledge and deduction of his opponents’ styles and personalities that allow him to take each of them down.

With the change in the tone of the storyline becoming evident, I am becoming more of a fan of this art style.  I feel it is going along with the fantastical shift of the story from a mystery to a more horror theme.  I look forward to the continuation of this theme.  I am beginning to want to see more of Tim and Bernard and the growth of their relationship.  I am looking forward to the issue where Tim reveals to Bernard who he is.  It is evident that Bernard wants to be there for his boyfriend, and I think he needs to see that Tim trusts him with this very important secret in his life.  I want to learn more about Bernard, who is he, and how he identifies.