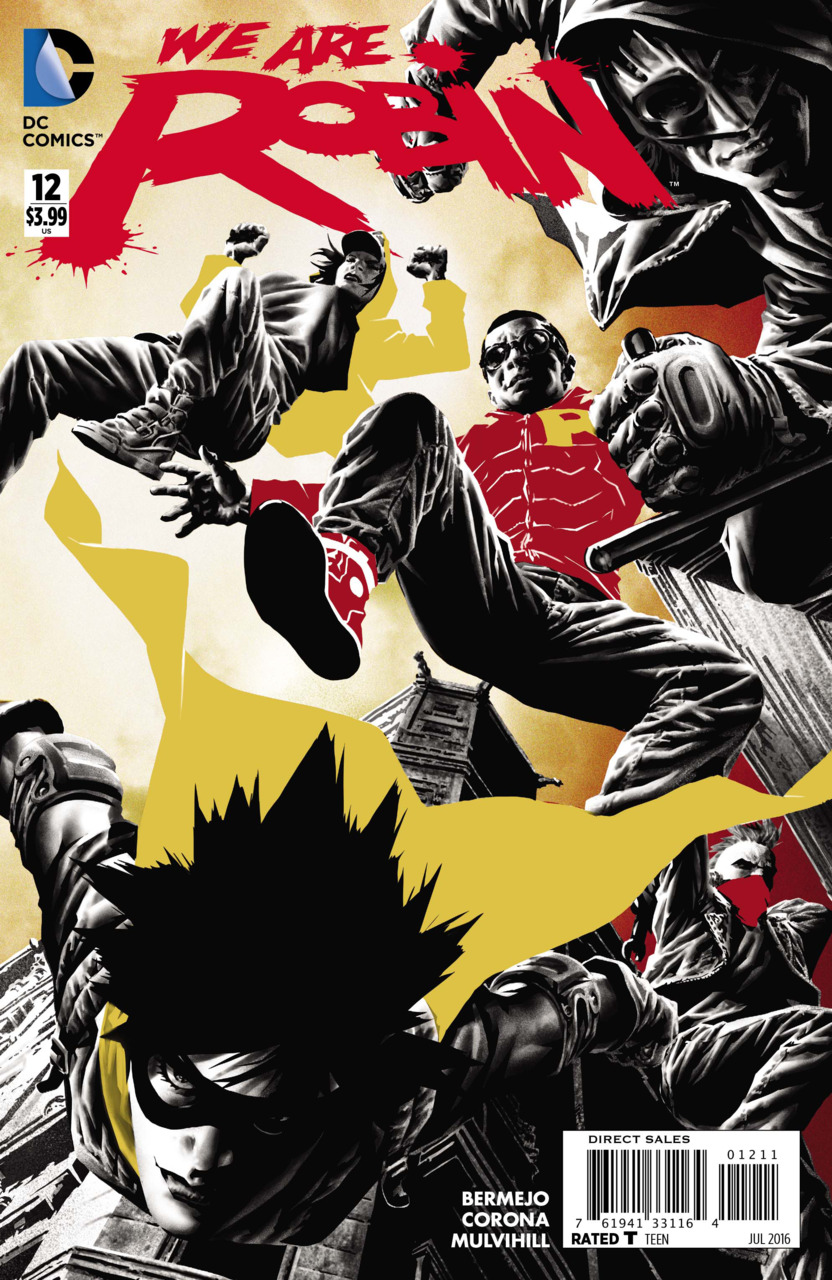 Synopsis: The issue opens on a robbery in progress as a group of masked individuals are trying to rob what looks like Bruce Wayne. They are interrupted by their lookout man who points out the Batsignal in the sky. The panel changes and we see that the masked thief is Cisco, AKA Redbird16, and two weeks ago his father lost a contract to Wayne Enterprises. The family is having money problems and Cisco’s father blames Wayne’s big corporation. Cisco offers to help with getting money. He is next shown walking into a restaurant and meeting with some men who want him to help them steal from Bruce Wayne.

At GCPD, Duke is waiting for his friends to finish giving their statements about their ordeal at the school and how they stopped Smiley and the Jokers. Leslie Thompkins shows up to express her pride in what Duke and his friends had done at the school. Duke invites Leslie to come visit his parents with him. Over the next few panels we see the various Robins dealing with their respective families in very different ways.

Writing to Robin “Shug-R”, Cisco tells her that he loved being a Robin and that he was about to do something wrong but for the right reasons. She immediately reaches out to the main Robins for help. They agree to meet on the rooftop of ACE chemicals. Once assembled they realize that they have updated their uniforms and comment on the need for some different codenames now. Shug-R shows up and its revealed that she has lost a lot of weight since the beginning of We Are Robin. She fills them in on Cisco’s situation and that he is about to rob Wayne. She tells them that its up to them to protect one of their own, even against himself.

Inside Wayne’s penthouse, the thieves open the safe only to find a note reading “nice try”. Alfred then enters and interrupts the thieves. The thieves want to kill Alfred but Cisco argues saying that killing was not part of the job. He tries to talk the shooter down to which Alfred agrees that the thieves should listen to the one with intelligence. The thief with the gun forces Cisco on to the balcony and is about to push him off when the Robins show up and stop him. During the struggle, the Robins take down the other thieves but one of them has Alfred at knifepoint.

Suddenly the elevator doors open and another member of the thieves appears. Duke tells them both to just leave and they will not follow. Some of the Robins are still determined to go after the men. They debate on what to do with Cisco, but they agree that he only did what he thought he had to do. They are not sure how they can get to the ground floor before the two criminals. Alfred reveals that Mr. Wayne is a big fan of extreme sports and actually has a few spare base jumping packs in the apartment. Duke thanks Alfred and even tells him that he looks better without the disguise that he had worn throughout We Are Robin. The issue ends with the Robins flying down to capture their “prey”.

Thoughts: This issue did a good job at ending this series I thought. As a standalone issue, it also was a good one-shot that had a nice self-contained story. I did wish that we would have had Batman interact with the Robins which we never got to see but it would have been nice to see his take on this youth vigilante team. Alfred’s interaction with the team was fun and it was good to finally see him be himself around the Robins without the disguise.

Corona’s art was on point again. No major changes in the artwork but he did give some us some new character designs which seemed to fit the Robins new roles.

Regarding this issue as an ending to the series, I was worried that the creative team would not end the series on a good note but they certainly did. The final shot of them flying down trying to make their city a better place is what the series has all been about at its core so it was nice to see that continue here at the end. The series itself has had a few rough moments and some problems but I have enjoyed the ride overall. It has been a nice break from all the major superhero stories. It will be nice to see how these characters fit into the larger TBU from here on out after Rebirth. Obviously Duke will make appearances, but I still felt that some of the other Robins had more interesting storylines that deserve to get fleshed out in the future.