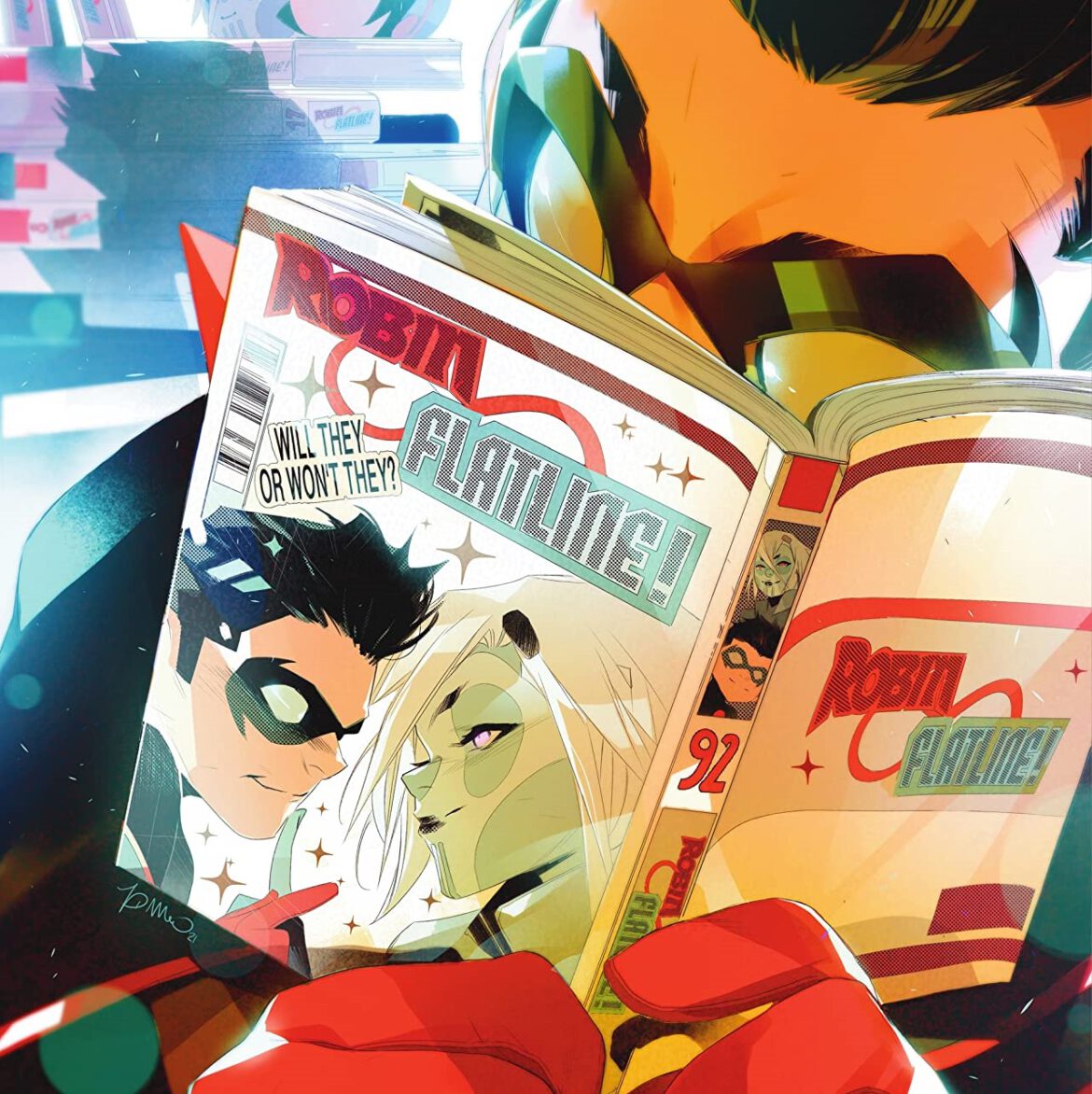 Overview: In Robin #7, it’s the semi-finals of the Tournament of Lazarus, and Damian Wayne uncovers not only the true nature of the island but the motives and the true identity of Mother Soul herself!

Synopsis (spoilers ahead): Robin #7 starts off where the last issue ends, during Robin and Respawn’s fight, Damian had snatched Mother Soul’s Book of Lazarus and begun digging into it. Respawn doesn’t respect the distraction, however, and buries his chain into Robin’s back. Forced back into battle, Damian quickly overcomes his opponent and nearly unmasks the Deathstroke look-alike, and kicks him off the cliff where Respawn found him. It happens off-panel, but we are seemingly to believe that Respawn is dead, having crashed onto the rocks below.

Mother Soul approaches Damian, telling him that while she’s impressed with his stratagem to nab the Book from her, he can’t win the Tournament unless he returns to the arena. Robin tells her that he now knows enough about the Tournament to see what her true motivation is: the Island of Lazarus, having been fed from various Lazarus pits, has now become a parasite whose host is death itself, which is why Mother Soul has created the Tournament. She wishes to awaken the force within it through their violence and, more importantly, deaths. Furthermore, he has also deduced that Mother Soul’s true name is Ruh al Ghul, translated as ‘Soul of the Demon’, and is Ra’s al Ghul’s mother. Her motive behind the Tournament is to groom the best fighter as her eternal servant. Damian vows to thwart her, but by the time he returns to the arena, Black Swan, XXL, and Drenched have already been sacrificed to the Island, leaving the Final Four: Damian, Ravager, Hawke, and Flatline.

Robin tries to get Ravager to leave, but her own mission, to discover Respawn’s identity, isn’t yet over. Before Damian can convince her, she is attacked by Connor Hawke. Before Robin can try to convince the former Green Arrow to desist, Damian is approached and challenged by Flatline.

Robin briefly tries to talk her down, but Flatline smells victory herself, and isn’t about to let him or anyone else take it from her. They fight, and soon she breaks Damian’s arm. She repeats her finishing move of ripping out Robin’s heart, but he has learned from his previous battles and is prepared to block her. He sends her crashing into a pylon of rocks. Unfortunately, Lord Death Man’s protégé has been impaled and dies.

Damian kneels down at her side and holds her wrist. The specter of Alfred comforts him, and then Ruh al Ghul approaches. Damian vows to stop Mother Soul’s ambitions and take her down, but Robin’s great-grandmother tells him there’s yet one more fight to be had: the contest between Ravager and Hawke has ended, and Rose Wilson has ended her life once more. Next up is the final battle of the Tournament of Lazarus: Robin versus Hawke.

Analysis: We are just a couple of issues away from the end of the Tournament of Lazarus, and after Robin #7, we are down to our final and most important characters: Damian, of course, but also the allegorical equivalents to his journey. Rose Wilson the precog, the seer, and guide to his path, keeping tabs on him and serves as the connection to his Bat-family; Conner Hawke, bird of prey who serves as a somewhat reluctant antagonist as he is for all intents and purposes ‘possessed’ by the great and evil cult that is the League of Lazarus and Mother Soul, and Damian has been flirting with Death herself (well, an agent at least) in the form of Lord Death Man’s acolyte, Flatline.

The scene where Flatline is impaled and dies is beautifully done. We get a brief scene from our favorite manga, in which Hana sees Ren’s painting through, and says ‘I knew you could do it,’ which parallels the scene on Lazarus Island in which Robin has battled on Flatline’s level and overtaken her. As she bleeds out and dies, we see the ghostly apparition of Alfred Pennyworth’s hand resting comfortingly on Damian’s shoulder. This is all the emotion we get, as Damian’s face is expressionless, and when he kneels down by his ‘friend’, we see that he doesn’t hold her hand, but her wrist. This is, of course, a practical move, as he is ensuring that her pulse will beat once more, which thankfully it does.

This symbolic overtaking of Death, after having successfully dropped all of his presumptions and revealed the truth behind the initial Tournament, means that he is ready to take on the head, but before he can face off against the true evil in Mother Soul, he needs to fend off her guardian, the League of Lazarus, through its formidable icon, Hawke, who we see will stop at nothing to end the Tournament and will not be swayed. Hawke has dispatched Robin of his last friend and guide, Ravager, and now Damian Wayne is alone, but equipped with everything he has learned from her and his other encounters.

The revelation behind Mother Soul’s identity is another stumbling block for Damian. His entire family has been responsible for so much death and anguish in the world, and now his great-grandmother is another added fixture to the family picture and another weight to bear as he is progeny to the manifold deaths of this Tournament under false pretenses. From his birth, death has surrounded and swathed Damian, and it always seems to beckon to him, while he yearns secretly to be a creative force, a giver of life and hope. He is constantly finding himself in situations where he is the cause of the opposite. Alfred’s constant presence is the ghost of that reminder, and now he has mistakenly killed his friend, too. Flatline’s last words to him are a haunting reminder, too: ‘Oh, c’mon… I know this isn’t your first time…’

As we close in on the closing chapter of this arc in Robin #7, Damian must truly recognize and reconcile the very complicated aspects of himself in order to overcome his inner and outer demons.

Robin #7 brings another beautiful issue told and illustrated by the creatives of Robin that leads the reader into complex topics through a bright and fun filter. This has been, and remains, my most anticipated read of each month.