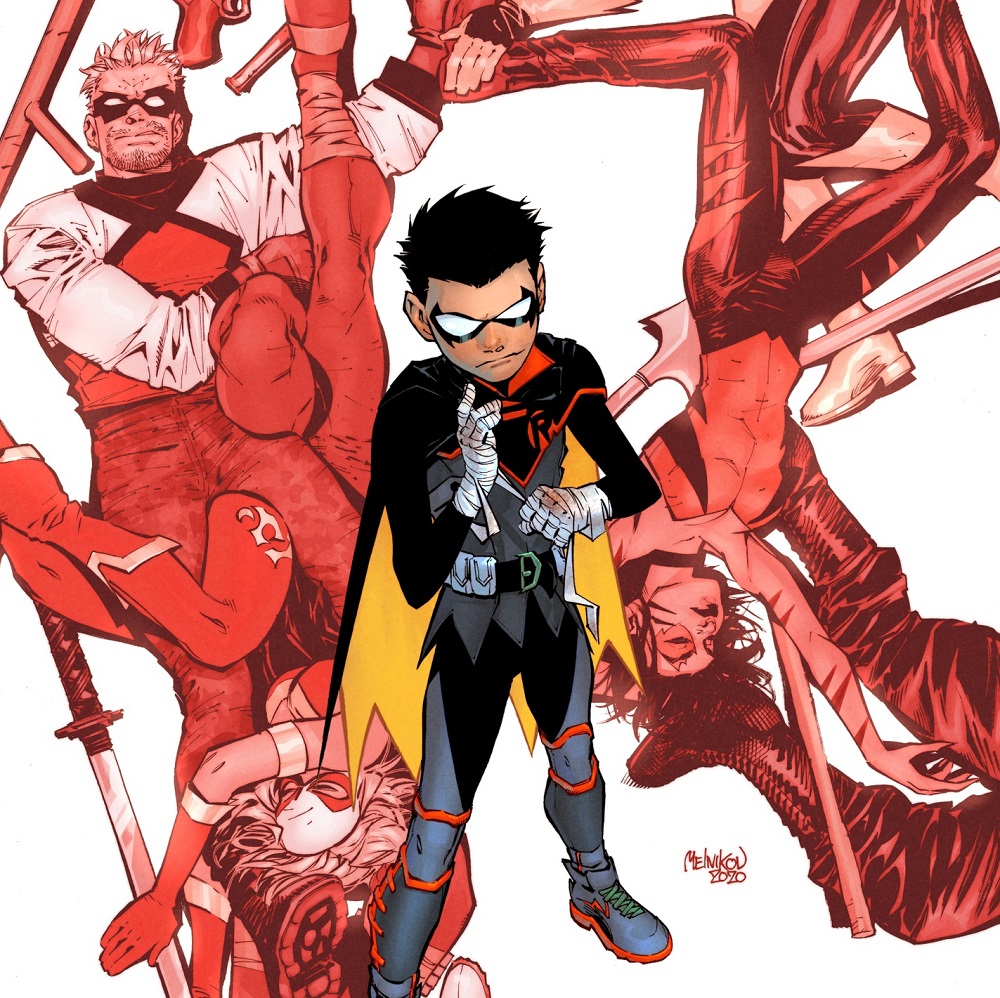 Overview: In Robin #1, Damian Wayne travels the world in search of a clandestine tournament that will prove he is the best fighter in the world.

Synopsis (spoilers ahead): Robin #1 begins in Gotham, Batman and the rest of the Bat-Family scour the city in search of any sign of Damian, who has disappeared after the events following Alfred’s death. After being trained by the League of Assassins and Batman himself, Damian knows better than anyone how to hide his trail. While everyone knows he’s more than capable of taking care of himself, Bruce also knows that his son needs more than training; Damian needs the love and support of those who care about him to keep him from continuing down a road he may never come back from.

We do get to see where the road has led him, however. Damian as Robin has been traveling the world, engaging in illegal fights in hopes to gain the notice of and entry into the tournament of the League of Lazarus (a small tease of which we got in the two-part story ‘Demon or Detective?’ featured as backups in Batman #106 and Detective Comics #1034). We catch up to him as he battles King Snake, a familiar foe to fans of past Robin comics, as he was a formidable opponent for Tim Drake in his early days in the costume. Damian, however, has no trouble whatsoever winning the fight and at last has gotten the notoriety needed to earn his place in the tournament.

Soon he is on his way, among other would-be champions (some of whom, like Ravager, would be familiar to readers) to the secretive Lazarus Island. It is here that, according to the Island’s matron, Mother Soul, every century that the League of Lazarus gathers together the mightiest warriors and pits them in a battle against each other.

Damian, impatient with the exposition, announces himself as Robin and rattles of his credentials as the greatest fighter basically EVER, and demands the fight to begin immediately. Mother Soul humors him, and his first opponent is Flatline, who also doesn’t waste her breath in commencing the festivities, and soon she and Damian are throwing down. The two are pretty equally matched until Flatline points out Damian’s weakness and ignorance in the rules of the tournament: that each fight is a fight to the death. We then see Damian fall in shock and pain, as Flatline has seemingly dealt a mortal blow because she’s apparently punched through Robin’s chest and pulled out his heart!

Analysis: We have seen Damian basically abandon the vigilante life after the City of Bane story arc; he left the Teen Titans, his family, and even Bat-cow! He’d stolen the Black Casebook and had made himself pretty much invisible to the world, trying to figure things out for himself. Over the months since leaving, we’ve spotted him now and then, but that costume had been abandoned for a few questionable alternate designs.

Let’s talk about Damian’s new costume in Robin #1. We can see in this new design enough of the familiar elements of the classic take to easily recognize the Robin motif, specifically Damian. The big, chunky ‘R’ symbol associated with him is still prominently displayed, his cape is still black and yellow, with the bat-wing cuts at the edges, and he still dons the large domino mask.  However, gone is the familiar hooded cape, and instead, he now sports a cape with a popped-up collar reminiscent of his grandfather, Ra’s al Ghul. The Robin symbol is now attached to the cape at the front rather than on the tunic. The costume is almost devoid of any brightness save the inside of the cape and a dash of green on his boot laces and belt buckle. The hood is attached inside the collar, no longer prominent. Nearly the entirety of the design is now grey and black trimmed with red, suggesting the far darker version of this character that Damian has always been. It indicates that he has rid himself of his childhood, putting away the brighter colors of the past for the more grim realities that he now fully feels earned since the death of Alfred, and now he can delve into the greys and blacks of the trauma shared by his father. This outward appearance is an expression that he is now more Batman than Robin, while still harboring an attachment to his al Ghul roots.

I believe this has been emblematic not only of his understandable grief, but also his coming of age. The designs vary significantly and seem to be very heavily influenced by both the al Ghul lineage and the Wayne legacy. These roots have always held the utmost importance to the boy, and he seems to strive so hard to not just earn but to rip his inheritance from his forebears. They are his identity, and yet the differences between the two are at odds. Damian has never been able to fully cut himself off from one side or the other.

The League of Lazarus and Lazarus Island itself holds, then, not only the expansion of the Ra’s al Ghul mythology, but the tournament itself may also be the struggle incarnate of Damian’s battle to gain his own identity. To be ‘reborn’ as a person who is more than just a Wayne or al Ghul. Someone who can finally lift himself up and out from the shadows of Assassins and the mantle of the Bat.

A few pages into Robin #1, after defeating King Snake, Damian is reading from a manga book, showing he’s not so far gone down the path of brooding that he can’t still enjoy himself now and then. The pages of the manga that we get to glimpse deal with a girl named Hana, who is teaching a boy, Ren, how to paint. Ren is used to being taught with a plan in mind, following the instructions of mentors, and following the proven ways, while Hana’s art comes from the heart, and is more dependent upon choosing to make your own path.

This seems to symbolize Damian’s current crossroads: he’s spent his entire life living and learning the ins and outs of the world based on the teachings of and training under the best mentors in the world but finds himself disappointed and discouraged by the failures he’s seen not just in the death of Alfred, but also the shortcomings of both sides of his family. Having lived so long under the watchful eyes of those he deemed his betters, Damian feels more than ever that he has been ready to graduate and become his own person, and that includes defining and living by his own rules.

While his actions are certainly selfish to a fault, we understand that Damian hasn’t fully lost his spirit. He still uses Alfred as the voice of his conscience and the identity of reason, and we see him being charitable towards a family in need by tossing them a bundle of what little cash was left to him from the recently-fallen Wayne fortune.

Sentiments like these may be put to the challenge, however. In his very first fight on the island, Damian literally has his heart torn out from him. This may also be a setup as an expression of perhaps having the heart of humanity taken from him. He’s left the world he’s known to travel the stormy waters (literally, as shown in the pages of Robin #1) and off to a secret island all alone, with no friendly faces to greet him. Indeed, they’re mostly enemies, willing to kill him to have the honor for themselves.

What is the prize that ‘Mother Soul’ grants to the victor of this fight to the death on Lazarus Island? All we’ve been told is that they are basically bragging rights, but these actually seem to be rites of passage for a more defined version of Damian Wayne.

Honestly, I thought the Mortal Kombat, Bloodsport, etc. type of story this had been hyped up to be was going to water down my excitement for a new Robin title, but Williamson's team seems to be gearing up for something special in this series. I'm actually loving the new costume, though I do hope we get some tweaks now and then so that we can get some more green back into the design. If his outfit is being used as a further storytelling element, which will change and morph as Damian truly grows, I'm all in for it.