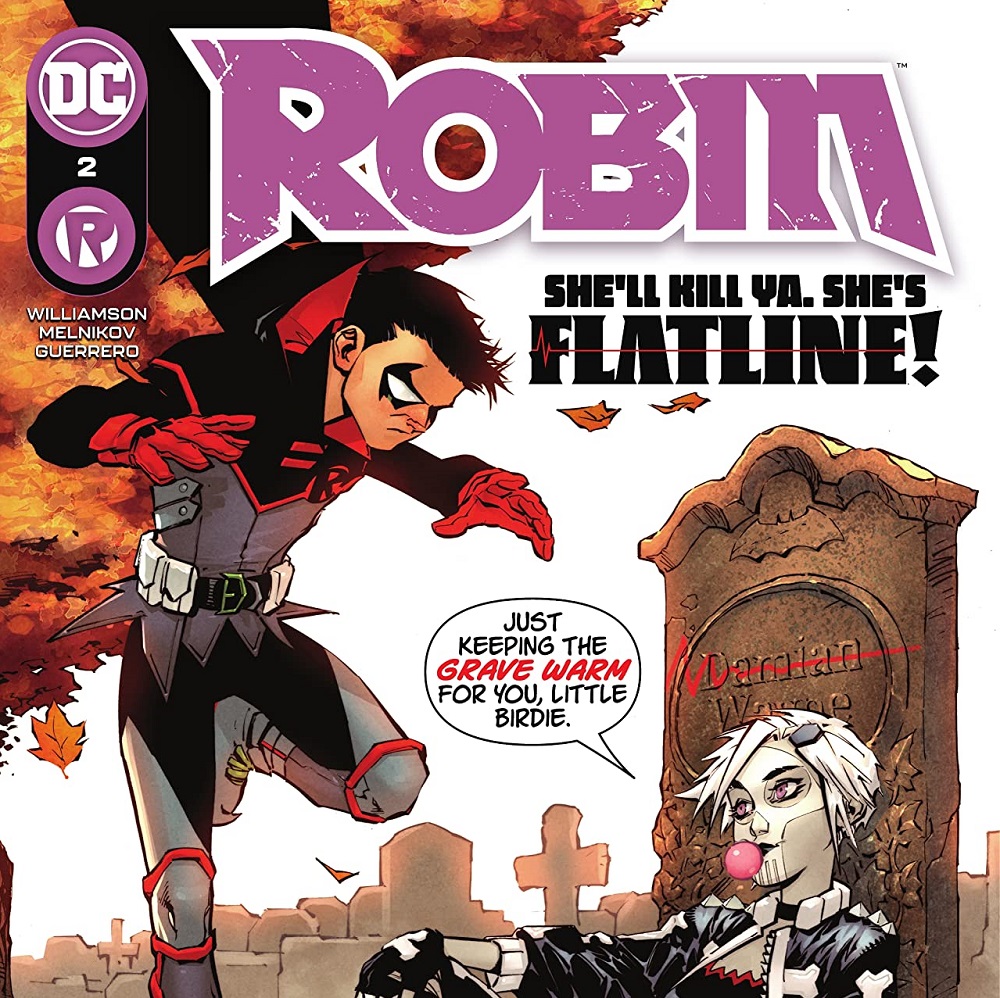 Overview: In Robin #2, Robin is resurrected on Lazarus Island and learns the properties and rules of the tournament, and Ravager and Flatline show an interest in becoming more to Damian than opponents.

Synopsis (spoilers ahead): After having his heart removed in the previous issue, Robin #2 begins with Damian lying dead in bed. His wound, however, soon heals itself and Robin reawakens into the land of the living. Ravager (Rose Wilson) greets him and explains to him the rules of Lazarus Island: no one dies. She then fills him in on the rules that Mother Soul had given the contestants while Damian was absent: all fights are to the death; every death will be resurrected; after each contestant has died once, the true tournament begins; you only get to die three times, after which you cannot return; fights can only happen when the sun shines upon the island, and the final survivor will become immortal.

Once Damian understands that death has basically no place on the island, he allows his inner assassin to let loose and he quickly dispatches several of the contestants and, with a showy gesture typical of Damian at his prime, shows Flatline (his murderer of the previous issue, and also the sidekick of Lord Death Man) that his sights are set on her.

After Damian has finished, Rose Wilson points out the biggest threats to him that the tournament has to offer: Respawn, XXL, Flatline, Black Swan, and Hawke. Each of these are clearly formidable individual threats, but we see that with Connor Hawke, he is being controlled by the League of Shadows, and is likely performing against his own will.

Ravager reveals that she, herself, isn’t terribly interested in winning the tournament. She has an agenda of her own and offers to train Damian in exchange for his help. Damian scoffs at the offer, believing himself to already be superior to every other fighter given that he was born an assassin and was trained by Batman himself.

Later, Damian is scouting the members of the League of Lazarus, and is joined by Flatline herself. They follow the League to a secret cave in which is hidden a large Lazarus Pit. The League, along with Mother Soul, deliberate on its stability, suggesting that something in this tournament will return the Pit to its stronger state. Robin exits the cave determined, despite the voice of his Alfred Pennyworth-conscience, to solve the case on his own. But before he can he is caught by Rose Wilson, who tells him he’s still not ready to win the tournament, and that he will need her in order to win. But for now, as Robin #2 concludes, he should relax and learn how to party.

Analysis: In Robin #2, Damian is propositioned into alliances with Ravager, daughter of Deathstroke, and Flatline, protege to Lord Death Man, reinforcing the idea that death both follows and guides Damian Wayne wherever he goes on Lazarus Island, this mysterious land in which so little is known to him.

As in the previous issue, the storytellers have used the additional layer of creativity by using multiple costume designs. Damian now understanding the true rules and concept of Lazarus Island, has dropped the Batman elements (and its limitations) and he is wearing the telltale garments of the League of Assassins so that he can go all out with his skills with glee. The only time we truly see any influence of the Bat is when, after being ensnared by Ravager’s net, Damian frees himself with the familiar Robin insignia. This may not be intentional, but it could signify that he is in great danger of reverting back to his former tendencies now that he is far from Gotham and so close to his birth home on Lazarus Island. He may, indeed, be falling into the net of evil, but as long as he holds onto a small shred of his better nature, he can escape its temptations and overcome the dark space of his soul that he’s been trapped in recently.

You can really tell how he enjoys letting loose in Robin #2, now that he can kill once again with near impunity. While he didn’t appear in this issue, and I doubt he’ll show up in this arc at all, Damian’s attitude reminds me, in contrast, with Jason Todd aka the Red Hood. Each of these Robins have been trained in some way by both the al Ghul clan and by Batman himself extensively, but with inverted histories; Damian was born and trained to be an assassin, and then had to learn the value of the limits of taking a life, while Jason was trained in the moral ways of the Bat, and then came to grips with his own reality, and allowed himself to kill. While Jason’s development became a tale of an angel that has fallen from grace and in many ways is still a story of being at rock-bottom and trying to find his road to redemption, Damian’s path is more akin to a child who has had to reluctantly go to school and learn to be socially appropriate; but here and now on Lazarus Island, he’s been let out for recess. He has his mission, but it’s almost taken a backseat to the liberation of his natural desires. I would at some point love to see a pairing of these similar-but-worlds-apart brothers-in-arms and take a deep dive into the meaning of their unique experiences.

In a literary sense, having Ravager come upon it may lead the reader to deduce that Rose Wilson, in her new role as uneasy ally on a secondary mission she’ll be sharing with Damian, will open him up in this necessary way. While Damian has his own agenda aside from the tournament, he is susceptible to allow his ego and desire to distract him in this loosening of his morals at play. Ravager, on the other hand, may be able to keep a leash on the Robin enough (also seen when she captures him in that net before he’s fully ready to take on the enemy) to keep him from fully sacrificing his objective and morals.

Even though it’s for a very brief, single panel in Robin #2, we get another peek into Damian’s manga. Like the costume, this is another artistic device I appreciate being put into the book. It’s emblematic of Damian’s putting on a strong, emotionless, ‘I don’t need anyone’ facade foil, and this manga allows him to reflect in a guilty-pleasure sort of way his need for emotional connection with others.

This is easily my favorite book at the moment and the one I’m looking forward to the most. It’s set apart from all the other happenings of the Batman Universe, but the setup has given it a good reason to be, and I honestly hope it stays and stands apart for some time to come so that, with Damian’s eventual return to the fold, we have this miniature universe of development to look back upon that has added to the lore of the Son of Batman.

As Mother Soul explains, you can die twice on the island and still survive. On the third death, however, your soul does not return to your body. This arc could potentially be indicative of Damian Wayne’s rites of passage. We have already seen him die in the guise of Robin. He now stands to perish wearing the threads of an al Ghul. If this happens, to what image of himself might Damian reawaken? With the dueling histories and moralities, the connections Damian is being cultivated with by Rose Wilson and Flatline, and even the unfolding story of his mange, the story so far seems to have this underlying theme of finding a balance. If the pride and conceit of Damian Wayne’s entire personality and heritage are stripped away, would he be able to cope with becoming something neither Bat nor Demon? I’m excited and hopeful that this idea will be unraveled in this series.

This book continues to be a fun and colorful romp of action, adventure, and intrigue with the promise of substance and development. The creatives clearly have a coherent goal of what direction they have with this arc in particular, and with Damian in general. The storytelling is multi-layered, the artwork is amazing, and the promise of what is yet to come is exciting.