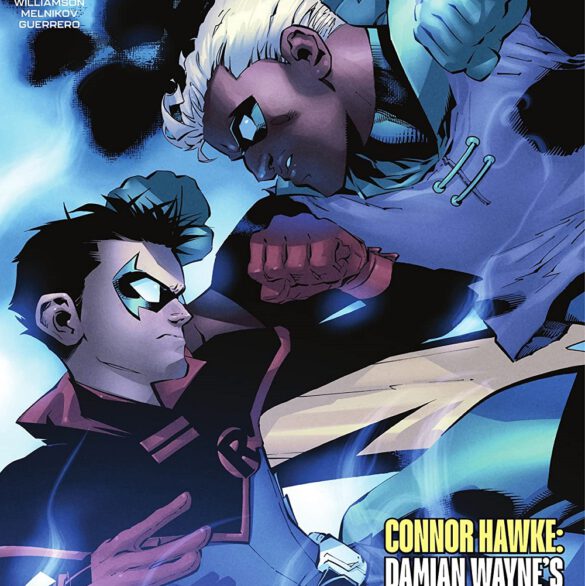 Overview: In Robin #3, Damian goes to a party, breaks bread with the other combatants on Lazarus Island, and later has a heart-to-heart before going hand-to-hand with Connor Hawke!

Synopsis (spoilers ahead): As Robin #3 begins, it picks straight after the previous issue, Ravager walks Damian through a less gloomy section of Lazarus Island, where the combatants are enjoying themselves at a party. Rose Wilson, in her role as mentor, instructs Damian that he needs to be able to loosen up, and he can begin that by acquainting himself with the other residents and have some fun. Although his conscience, in the form of Alfred Pennyworth, reminds him that everyone present is a criminal, Damian does manage to earn some quick respect by showing off some skills. This breaks the ice enough to open him up a little.

Soon, however, he is forgotten as the others share stories of their defeat at the hands of the Dark Knight himself, and Robin walks away from the party alone once more. Damian retreats to a quieter place, where he finds Connor Hawke, himself alone and meditative. The two sit together and bond over their shared legacies. Each of them actually manages to laugh together, even.

This is soon broken up, however, when the representatives of the League of Shadows arrives and tell Connor that he is not to commune with Robin, his enemy. Damian recognizes the speaker as Master Dusk, former head trainer to the League of Shadows, who had been banished by Talia al Ghul.

Dusk orders Hawke to take Robin down, and the two engage in combat. While the two are rather evenly matched, Hawke bests Robin, and, at the behest of the League of Shadows, Damian is thrown off the cliff.

Too weak to save himself, Damian passes out. We get to see a mysterious figure come to his rescue at the last moment. As day breaks the following morning, Robin awakens, asking if his father had saved him. We learn that his savior isn’t Bruce Wayne, though….it’s Damian’s grandfather, Ra’s al Ghul.

Analysis: Williamson, Melnikov, and Guerrero continue their deep dive into this first story arc in Robin #3 by opening up another branch for Damian Wayne to explore: bonding outside the Bat.

An interesting moment happens almost as soon as he has gained some respect from the other opponents at the party. In the familiar arrogance he wears, he shows off his deadly skills at the game of rapidly slicing down between his fingers in front of the group of adversaries (notice Damian’s ‘assassin’ garb here). He enjoys a minute basking in the glory of their adoration at his skill before his father is brought up. Instantly, the focus has shifted, and Damian feels swallowed up by the shadow of Batman. He has traveled far from Gotham City, to make a true name for himself, and still, his own presence is preceded by the legend of his father. Robin is SO overshadowed by the stories that he is hardly noticed to have left (sloughing off the robes that tangentially connected him to them). The bravado has burst and he wanders off to a lonelier part of the island.

In trying to put himself out there and make a possible bond with the others, his rather impressive skill in being able to stab little daggers into the table between his fingers only really serves to underline not the person who was able to perform the trick as much as the epic icon who trained him.

Upon their meeting, Connor Hawke tells Damian that he heard the sounds on the beach, and didn’t recognize them. Those noises were laughter and general merry-making. Whatever the League of Shadows has taught him he, too, hasn’t had much of an opportunity to build any sort of meaningful relationships outside of his mission. Ironically, this is one of the very characteristics that allows a bond to form between himself and Damian Wayne. Well, that and being the slightly lesser-respected proteges of their celebrated fathers.

Try as he might, Robin cannot outgrow Batman. And Damian knows deep down that he isn’t ready to carry his own at the end, either. As he plummets towards the rocky shore below after having lost to Connor Hawke, we can see that he loses his cockiness as his thoughts turn from him trying to save himself to a giving in of sorts, to his last thoughts being of Bruce and Alfred. The thought isn’t finished, but the context seems to imply that he needs their help, or just wants their presence again.

He is whisked away at the last moment in Robin #3 by Ra’s al Ghul, and with what seems to be a bit of foreshadowing. Ra’s saves Damian from hitting the water, and the reflection depicts a bat flying through the night directly in the middle of the full moonlight, and the saving grace from al Ghul disturbs the water to give this reflection a wiping-away movement. The next page shows a new day dawning on the island, and this is when we get the reveal that Ra’s is the one who rescued him. Presumably, the next few issues will deal with his ties to the al Ghul side of Damian’s personality, and as Ra’s promises to teach his grandson much, Damian’s complex allegiances may shift even deeper.

The underlying narrative I keep getting from this story so far is a young boy out to make a name for himself. He is not only living in the shadow of his father, but Damian Wayne also seems to seek growing out of the shadow of the moniker he's still attached to as Robin. That persona also has a weight attached to it.