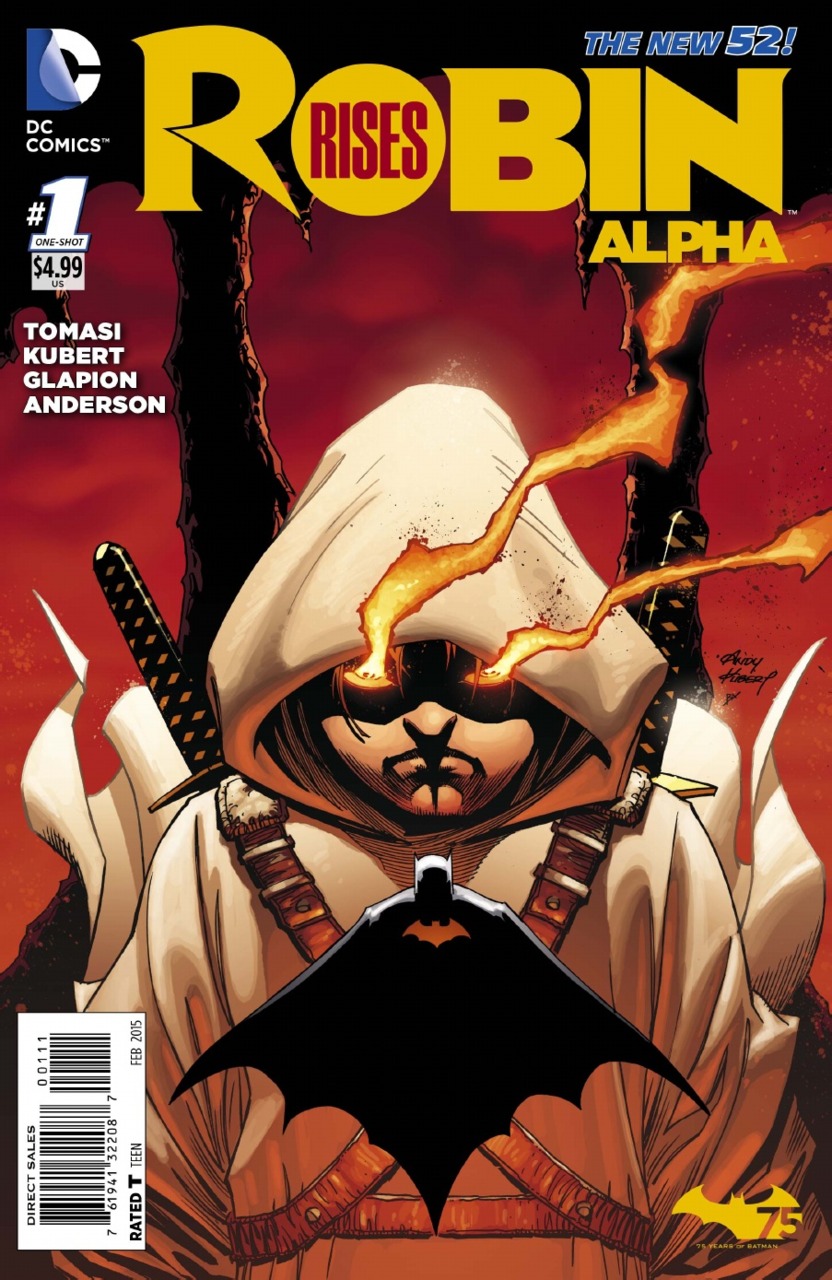 This issue opens with a bit of a recap from Batman & Robin #37. In the Hellbat suit, Bruce holds Damian’s body as they prepare to come through the boom tube and return to Earth. In the Batcave, we see that Alfred has been monitoring Gotham City and comments that Batwing and Batwoman have been doing exceptional work in the last 62 hours since the remaining Bat Family members went off to Apokolips. The batcomputer suddenly signals about an incoming energy anomaly and Alfred stands up, straightens his tie, fixes his hair, opens a vault within the cave and straps on some kind of energy weapon to his back. The boom tube opens and everyone tumbles out onto the cave floor…and as we saw in the previous issue, Batman begins to bring Damian back – ejecting his helmet, removing the crystal and thrusting it deep into Damian’s chest.

While Bruce is working, Jason and Tim try to rouse Cyborg to close down the boom tube before anything else comes through, but are quickly preoccupied when Damian opens his eyes and embraces his father. Bruce collapses from exhaustion and Alfred bends over to see if he is alright, he tells Damian that they will have to postpone this joyous reunion until they have finished with what’s happening. The others prepare to defend the boom tube opening, as Cyborg attempts to reboot his systems and shut down the portal…Damian, always ready for a fight, removes some batarangs from his father’s utility belt and prepares for battle…however he notices that he accidentally crushes one of the metal batarangs quite easily in his hand.

Batman finally comes around as Alfred dishes out more energy weapons to defend the portal. Kalibak suddenly bursts into the cave as the entire Bat Family opens fire on him. The beams don’t seem to faze Kalibak and he knocks everyone away. Batman begins to engage Kalibak as Damian attempts to help and both are thrown far from the fight. Batman lands in one of the underground lakes but Damian comes to his rescue and pulls him from the water…Damian wonders how he is still alive as he struck a nearby wall quite hard. The other family members continue to fire on Kalibak but everyone gets knocked down, and Cyborg still lies on the floor trying to reboot and close the tube.

In a brilliant splash page, Damian engages Kalibak and knocks him across the jaw. The two battle and knock each other into various objects around the batcave. Kalibak succeeds in throwing Damian into the giant penny which tumbles down on top of him…but Damian retaliates by hurling the penny in Kalibak’s direction.

Elsewhere, Cyborg informs Batman that he is ten seconds away from shutting down the portal and we discover that Batman has gotten into a batwing and uses the vehicle to drive Kalibak into the closing boom tube.

With the battle over, Damian tells everyone that he feels “different,” and embraces his pets that had been in Alfred’s care since his death. Damian thanks Alfred for what he did and is presented with the symbolic “R”s that Batgirl, Red Robin and Red Hood wore in his honor during their time on Apokolips stating that “there’s only one Robin.” As the group heads up to the manor, Bruce states that he and Damian have much to discuss.

The book then cuts to a quick scene in a location near Nanda Parbat where we see a resurrected Talia Al Ghul attack a group of people camping in the frozen wasteland. One man asks her who she is and she replies that she doesn’t know.

Outside Wayne Manor, Alfred, Bruce and Damian stand in front of Damian and Talia’s graves. Bruce explains that he destroyed Damian’s monument before he left for Apokolips because he was determined to see his son returned alive. They also discuss Damian’s newfound powers and that they will need to monitor and watch him closely, however Damian points out that Bruce agreed to let him join him the next time the batsignal shone in the sky. Damian then asks about his mother’s marker, and Bruce replies that he had a clear goal and it did not involve finding Talia. Titus then runs over bringing Damian a baseball and Damian throws it…seemingly forever thanks to his super strength.

As if on cue, Alfred looks up into the sky and exasperated states “is one night too much to ask?” The batsignal has appeared in the sky and the issue closes on a splash page where the newly reunited Batman and Robin swing across the rooftops of Gotham City.

To those who know me, it wasn’t a shock or surprise when I told everyone that my favorite Robin was alive and well in this past month’s issue of Batman & Robin…and how excited it made me feel. It was truly amazing to see the journey that Bruce made to bring his son back…even though I’m still trying to grasp exactly how it all worked out.

This was definitely a great conclusion to the “Robin Rises” storyline and the outcome (as expected) resulted in the return of Damian Wayne…however we now have a super powered Boy Wonder to deal with.

This issue also opened up some new storylines that I am looking forward to seeing…obviously the big question revolves around the super powers now possessed by the young boy, are they finite? Or is he basically a new Superman character? I’m not sure how I feel yet about a super powered member of the Bat Family, I always enjoyed the fact that each member was a normal human that trained extensively to fight against crime…so I guess I’m hoping that these powers are only temporary but we shall see in the coming months.

Additionally we also saw the return of Talia. I didn’t quite recognize who she was on my first read through, but everything came into perspective when Damian and Bruce discuss Talia at the end of the book. It also seems that Talia doesn’t remember who she was, so I am assuming that Ra’s’ plan to wipe Damian and Talia’s memories has succeeded with her.

I was also a little curious about the energy weapons used against Kalibak…now I know that some fans might not like to see the Dark Knight wielding a gun, but I think it makes sense that he is prepared for some extremely powerful forces…and if one would recall, Batman tells Darkseid in “Final Crisis” that he is willing to break the “no guns rule” just for him. I was also wondering about the power source for the guns, each beam was a different color of the spectrum – blue, green, yellow, orange, red, pink…it almost seemed like concentrated Lantern energy in weapon form…not sure if I’m correct on that, but it would be interesting if that’s something that Batman created.

Overall this was a terrific ending to the “Robin Rises” and I am glad to have Damian back among the land of the living, Tomasi did a good job with showing the emotions displayed by each member of the family and it was all brought to life with some exquisite artwork by Andy Kubert.