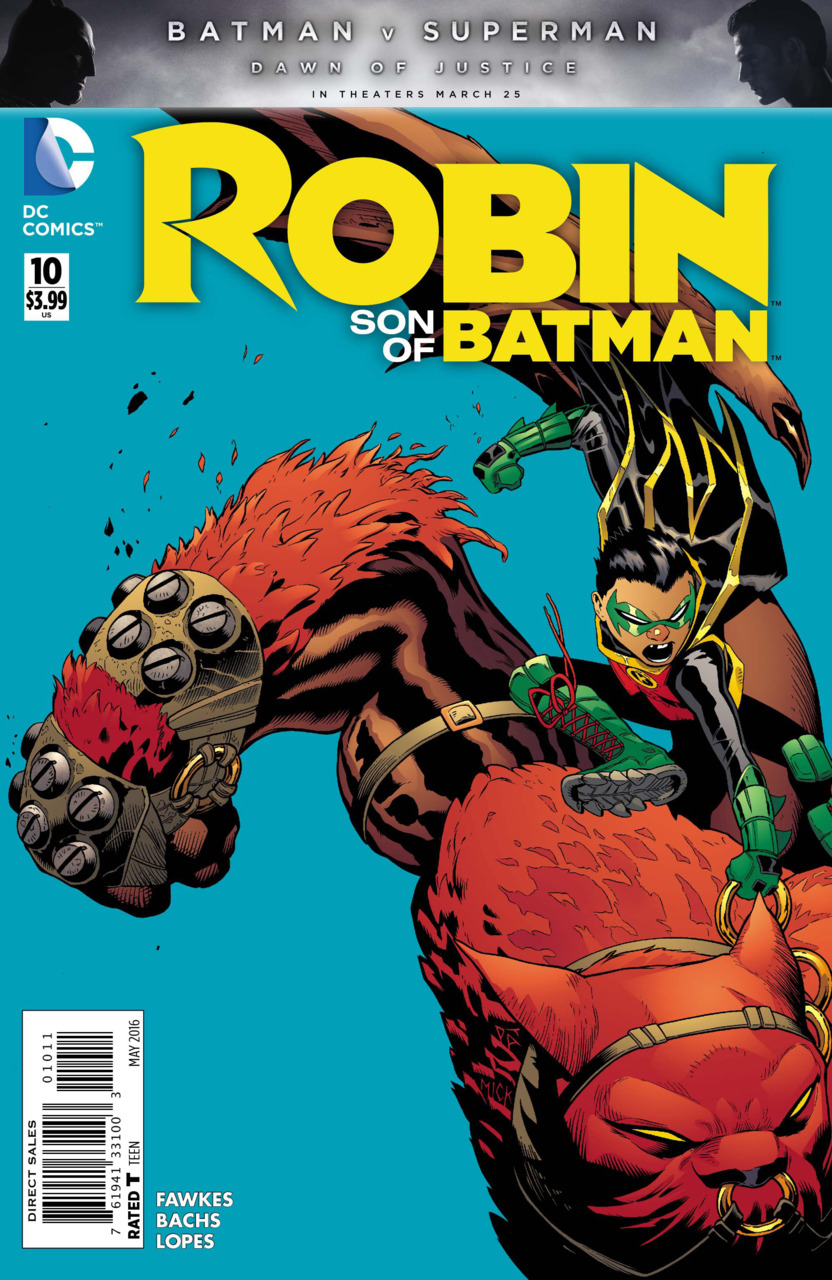 Opening up three weeks prior to present events, a skeletal corpse can be seen as an unknown voice whispers “im…impossible.” As a young hand rests upon the horned mask of the speaking man, the first man talks of the artifacts being returned by the “Al Ghul child” which was intended to resurrect the Lu’un Darga. Ripping the mask from the seemingly dying man, the second unknown character states that one of “us” will be quite enough and calls the first man “father.”

Cutting to the present, Damian is busy feeding his plethora of animal companions when an alarm sounds that indicates an entry within the sub stationed at Al Ghul Island. Leaping into his Robin costume and taking off on Goliath, Robin arrives at the sub to find that three items from the Year of Blood have been stolen. Flashing back to the past, a young child can be seen standing in front of rotting shell of his father as he places the horned mask atop his head.

Seeking to find the stolen items, Robin contemplates asking Maya for aid and even uses his magic mirror-like looking glass to look at her. Deciding once again to let her live her own life, the issue cuts to a beach at sunset where Maya walks by herself. Looking out into the ocean, Maya sees several boats speeding towards her with masked assailants in black.

Meanwhile in Chihuahua, Mexico, Damian and Goliath arrive and descend into a deep crater with a lake at its bottom. Swimming underwater, the pair emerges inside a crystal cavern where Robin hopes that the Serpent Heart has not been returned to the altar of Hrav-Varha. Back on the beach, Maya begins to fight off her attackers but is quickly incapacitated where the leader of the attackers reveals herself – Talia Al Ghul.

Back in the cave, Robin looks up at the altar to see a twisting serpent stuck into between the jaws of a suspended skeleton. Suddenly attacked, the new duo quickly knocks out the bad guys who reveal they are working for the leader of the Lu’un Darga. Springing to life, the snakes suddenly multiple as Damian cries that the spirit is angry that the Serpent Heart had been taken…the two quickly flee. On a boat, Talia interrogates Maya in regards to the theft from the sub on Al Ghul Island…believing Maya had betrayed its location to the Lu’un Darga.

Deep in the Congo Basin, a soldier of the Lu’un Darga is cut down as Suren Darga leads his remaining warriors into battle. Claiming that the “Al Ghul child” will fall before him, the issue ends when it is revealed that the next item was taken from Gorilla City.

It’s always a tricky thing when a new creative team takes over a book from the previous creators…even more so if that new team decides to continue on with the universe established by the original. I have to say that Ray Fawkes and Ramon Bachs are doing a decent job with finishing the story of the “Year of Blood” that was started by Patrick Gleason.

As seen previously, it was revealed that there has been an ancient feud between the Al Ghul and Lu’un Darga clans that eventually resulted in Ra’s using Damian to steal artifacts that provided Darga with power. Initially wanting to repent for his actions during the Year of Blood, Damian began returned the stolen artifacts…unknowingly returned the stolen power to Den Darga.

Eventually the truth was revealed and Damian sought to end the feud and essentially stop the war by effectively keep the items from both sides…however this issue sees the new leader Suren Darga rising to power and stealing the last of the artifacts.

I was a little confused in this issue as I had thought Al Ghul Island had been destroyed in a previous issue, the one where the Damian clones sacrificed themselves to save their brother. However maybe this was a different location…or perhaps a simple editor’s error.

I like how Talia manages to bring Maya back into the story by kidnapping her under the belief she had betrayed Damian to the Darga Clan…we all know this information will get back to Robin and he will have to save her. It did make me wonder who indeed did betray the location of the sub to Suren Darga, perhaps the “loyal” Ravi was the one to betray Talia? Or maybe an unknown character that we have yet to see.

All in all, I really enjoyed this issue, but did find that the story did jump drastically from location to location…it felt a little rushed, as if a finite number of issues were remaining before the book was cancelled. Hopefully this rushing feeling ends and Fawkes is able to bring the redemptive Damian’s story to a successful conclusion.