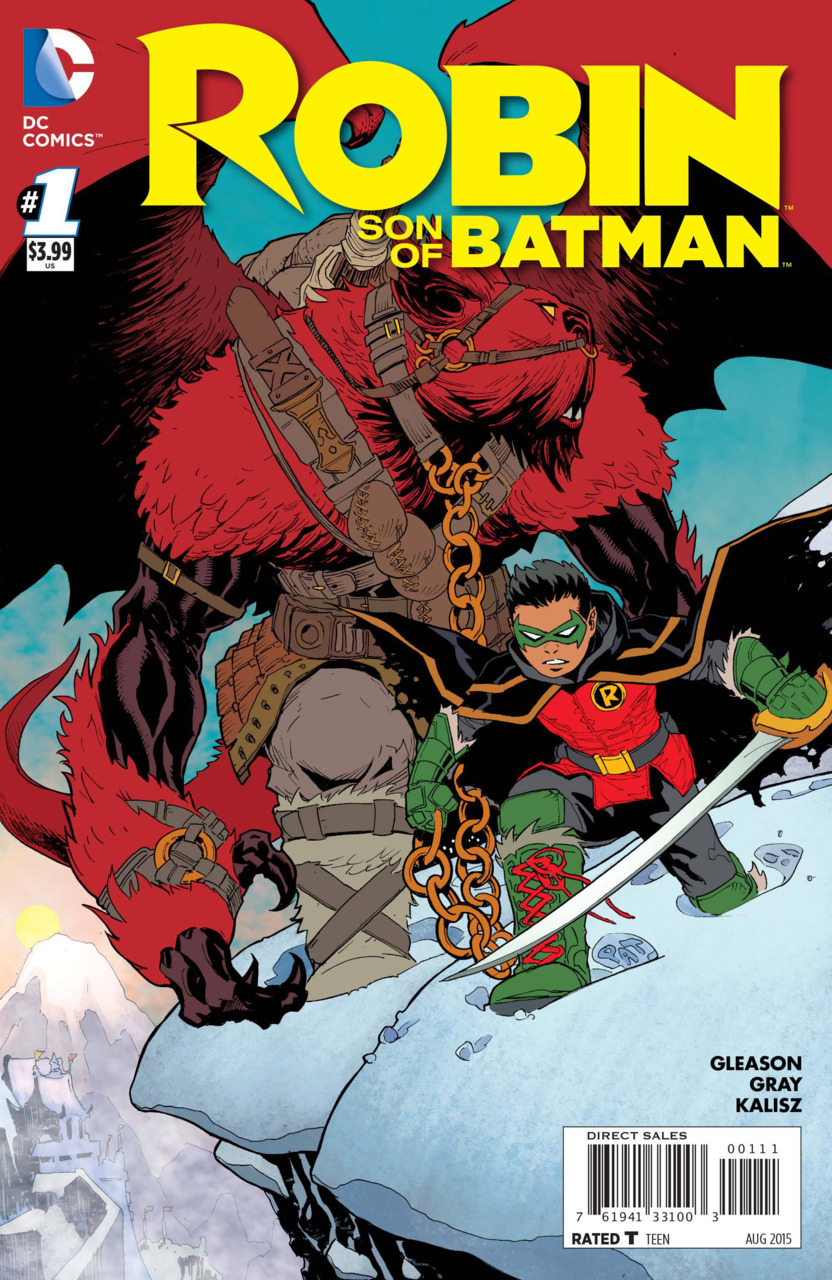 Editor’s Note: Please note that in addition to Issue #1 this reviewer also talks about the 8-Page Preview of “Bat-Mite” seen in the “Convergence” titles during the month of May

The sneak peek opens with Robin arriving at a monastery in China. He addresses a monk and attempts to return some sort of scroll to him. However they are quickly attacked by a band of ninjas (or quite possibly members of the League of Assassins…not too sure). As Robin begins to engage them, he begins to blow a skull shaped whistle…and from out of the sky drops a giant Man-Bat beast which he calls Goliath. As the two begin to engage their enemies, several other white bat demons appear and Goliath begins attacking them. As the last of the bat demons are driven off, Damian finally returns to the monk and hands over the ancient scroll that he was carrying. Off in the distance, an unknown figure watches Robin accept some food from the villagers and comments “there can be no atonement for the Year of Blood.”

As issue #1 begins, we find Robin busy talking to some sort of King in the country of Bialya. Behind him, Goliath is chained and imprisoned. As they talk, the King comments that he will have Damian fight his son and learn what it means to become a true man. Robin however quickly takes control and locks himself in with the King and delivers a strong punch to his face as he states that he is “Robin, Son of Batman.”

Cutting to some unknown time in the past, Damian is busy training in the batcave as he takes apart several robots. Back in the Manor, Damian receives a call from someone who informs him that Goliath is on the loose.

Meanwhile in Gotham Harbor, an unknown person finds the mask of Nobody (seen in the first volume of “Batman and Robin”) and downloads the last video images before he died. Watching the scene, a young woman cries as Nobody dies and identifies the man as her father. As two of the GCPD arrive, she quickly dons her own similar Nobody mask and stealthily takes them out.

Arriving at Al Ghul Island, Damian accosts the man who called him. Ravi mentions that Goliath has escaped and Damian ventures into a creepy submarine to retrieve a whistle that can summon the were-man-bat.

Cutting back to the present time in Bialya, Damian is busy attacking the guards as Goliath breaks loose and charges out through one of the walls. Goliath however flies to high and Damian looses consciousness and passes out.

In a dream sequence, Damian visits the empty graves of himself and his mother as he talks to Dick Grayson about his death. A terrifying bat shaped silhouette appears above them, and Bruce appears and grabs his son, demanding to know about the Year of Blood. As several demons begin to drag Dick down into a fiery pit, Bruce is stabbed through the back by the Heretic. All the while a demonic Ra’s Al Ghul towers over the fire pits and Talia begs her son to return to her.

Awakening from his nightmare, Damian realizes that he needs to atone for the deeds he committed during the “Year of Blood”…the year that he spent training to take over for Ra’s Al Ghul and lead the League of Assassins. Entering the submarine once again, Damian opens a sealed door and enters a vast room with countless objects and a giant banner that reads “Damian Al Ghul.” As Goliath holds a giant stone head, Damian comments that they indeed should start with The Guardian. As he proclaims the “Year of Atonement” starts now, a set of purple eyes watches from the shadows and agrees.

The issue closes with a scene of a still amnesiac Talia Al Ghul being attacked by an unknown foe…however, at the last moment she seems to recognize her foe and recall her memories.

I can definitely say that I am excited for this book! Damian Wayne out on his own, and with nothing less than a giant were-man-bat at his side…but don’t call Goliath that 😉

Although you need really stretch this story into its place in continuity, it does make sense that Damian decided to begin this crusade prior to the events of “Batman Eternal” and could explain his disappearance. However, I won’t delve too deeply into that as it doesn’t pertain to the story all that much. Mostly, I like seeing Robin out on his own…Damian has always been my favorite Robin (and there are some who will probably disagree) so I can definitely get behind him having his own solo book finally.

I like the fact that Patrick Gleason has picked up where the initial run of “Batman and Robin” left off…not many writers tend to do that, most will start their own story and only continue along certain threads or characters. However, I like that Gleason keeps Damian in a place that he was at the end of the previous series…still the head strong Boy Wonder, but trying to figure out his place in the world.

I also liked that there is a bit of mystery surrounding this “Year of Blood.” It clearly is haunting Damian as it seems to center in his nightmare, and I’m curious as to what he got up to in his training under Ra’s Al Ghul. Also, we get to see the return of Nobody…kind of. I like that Gleason brought back an old foe from the first story arc and I’m curious to see how she is involved with Damian’s atonement…maybe something more was happening between Robin and Nobody than was first shown?

As always, Gleason’s art is amazing and I hope that he is able to keep up with pulling double duties on both writing and art…as we have seen in the past it tend to last maybe 5 or 6 issues before another artist is brought in to help. Hopefully this doesn’t happen.

Overall I’m really liking this series, and love seeing Damian in his own book…can’t wait to see what happens next month.