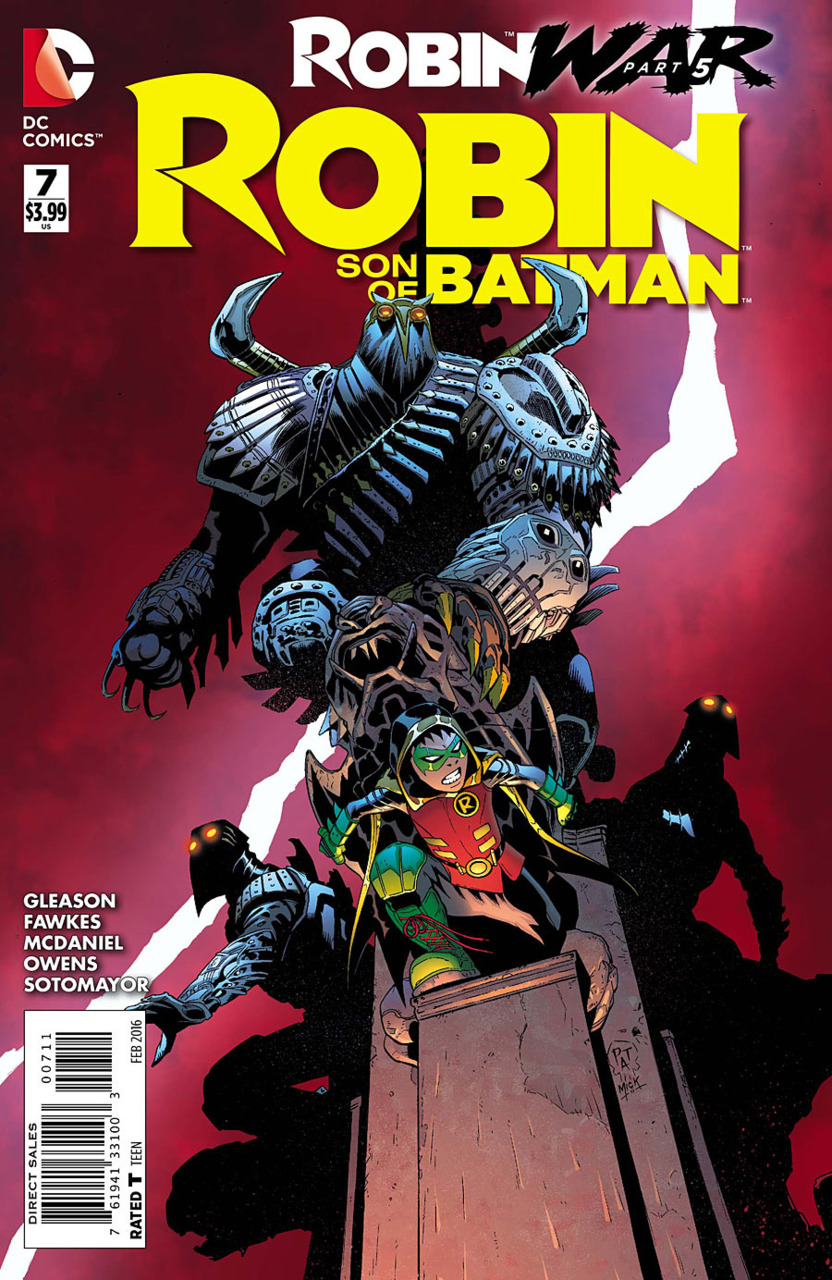 Opening in mid battle, our heroes are busy confronting the Talons of the infamous Court of Owls. As Robin, Red Hood, Red Robin and the We Are Robins leap into battle, Damian calls out for the other Robins to listen to Red Hood’s orders. The fight continues as we see a Talon realign his snapped neck, and the battle spills back into The Cage below.

Cutting across the city, we see councilwoman Noctua talking to the Court as they force her to contact Batman. Then we see Dick Grayson fighting against several Talons within the Court’s labyrinth.

As the Robins succeed in routing the Talons, one of them mentions seeing their enemy at Gotham Academy. This leads Red Hood and Red Robin to assemble We Are Robin…the two veterans send the youngsters home but keep on the more experienced members. They also note the Damian hasn’t returned from the battle, but they don’t seem concerned. Arriving at the Academy, Riko brings our heroes the greenhouses that played a role in the “Gotham Academy” tie-in issue. Descending below ground, Tim and Jason lead the Robin members through a tunnel until their come to a secret laboratory where several scientists in Court masks are working.

A large explosion draws their attention in the room as robo-Batman steps into view. Announcing that the Court members are under arrest, the Robins dropped down to take out the Talons in the room. Another battle erupts as Batman assists the others in battling against the villains.

Reaching the end of the labyrinth, Dick is escorted by a Talon into a room where Lincoln March stands waiting for him. March explains that the Court originally had its eye on Dick to take his place as the Gray Son of Gotham…however; they have managed to find a more willing candidate. The issue closes with the Robins continuing their trek through the sewers as they come face to face with the new candidate. Clad in an owl mask and standing in front of group of Talons…is Damian.

Robin War rages on in this issue as we begin with our heroes battling against many a Talon. I liked the action in this battle as it showed the deadly accuracy of the Talons and the inexperience of the We Are Robin members. I liked the design of The Cage in this story line and the fact that the former Robins are teaming up with the new members quite easily.

Damian goes missing early on in the book, which I found rather odd since this is his book. The Robins eventually assemble the entire We Are Robin and send most of the members back home…accept for the main characters. Tying into the “Gotham Academy” issue, Riko leads the team back to the greenhouse where the action was taking place in that story.

I like that we keep flashing back to Dick and Noctua as we see the Court manipulating both of them. Lincoln March comes as no surprise, but it is a little confusing because I thought that the Court locked him away because he was deviating from their plans to conquer Gotham…did he somehow escape? Or did the Court let him out?

And of course, the big shocker ending is Damian equipped in his very own Talon mask. This actually surprised me when I saw it, but upon re-reading it makes sense that the Court would target the more aggressive candidate in Damian. This issue in particular made me think a lot about the direct to video animated feature “Batman vs. Robin” as the Court attempted to lure Damian in that story as well.

Over all this was a decent issue, however I feel that the endgame goal is still a little vague…why does the Court of Owls need the Gray Son of Gotham? And what are they ultimately looking to achieve? Hopefully this is answered in the finale.