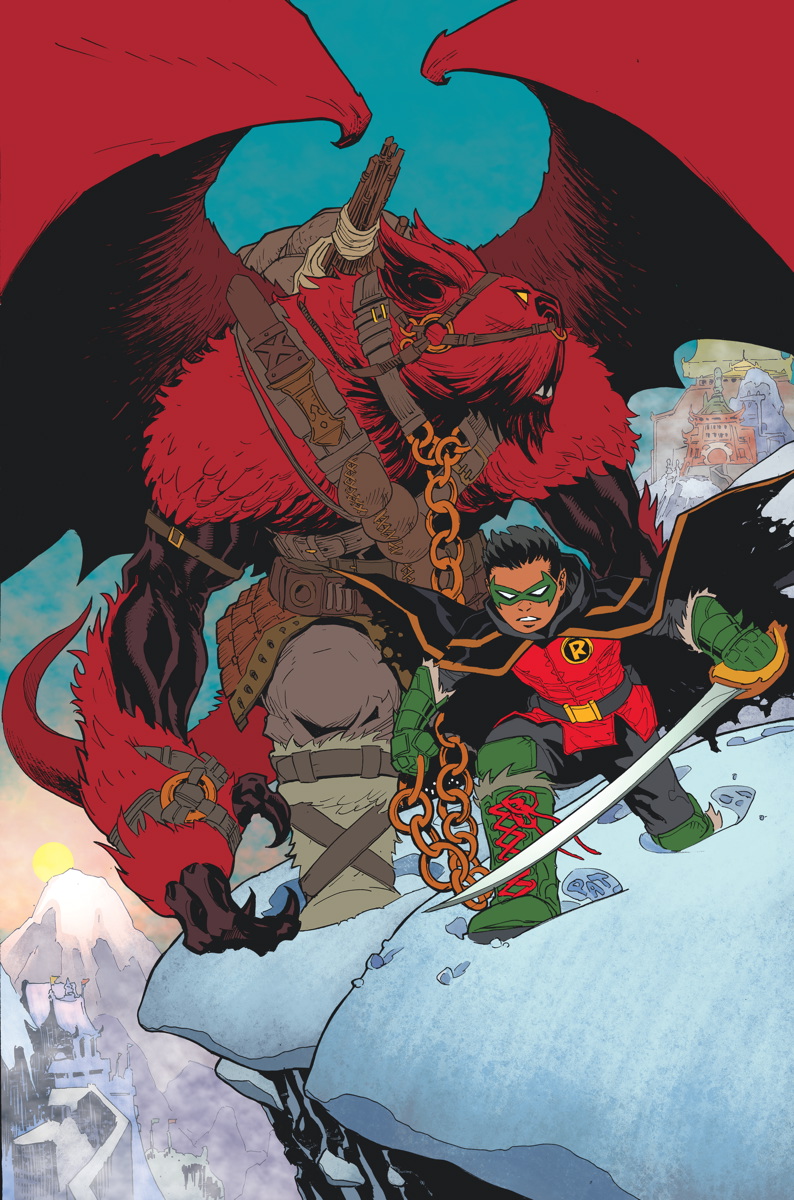 Warning:  This article and interview contain spoilers for Batman #40 The release of the new title Robin: Son of Batman in June will be a new adventure for both Damian Wayne in his role as Robin in a world where Batman is assumed dead (after his epic battle with the Joker in the conclusion of Scott Snyder and Greg Capullo’s “Endgame” story arc) and also for Patrick Gleason as he makes the move into being a comic writer after having been an artist for DC  for years (most recently working with Peter Tomasi on the now-ended Batman and Robin).  In an interview with Newsarama, Gleason discussed the challenges of starting as a writer on what will hopefully be a popular title both for Gleason and the Boy Wonder and also gave some insight into what fans of Damian and Robin can expect as he strikes out on his own.

In the intervew, Gleason gives us some key information about the new title and about Damian as well.  We can expect to see Damian grieving the loss of his father on top of still grieving the loss of his mother (who he does not know was also resurrected in the pages of Batman and Robin) almost mirroring Bruce’s loss of both parents as well.  However, we will have a new status quo that sees Robin operating completely separately from the all-new Batman as Damian will have little to no contact with Gordon’s new Dark Knight.  In addition, we will see a new cast of both supporting characters and villains despite Damian’s propensity to work alone.  But, most importantly, Gleason wants fans of Robin to be excited for the new book which will have a tone and a style that he describes as “punch-you-in-the-face-fun with a dash of ‘aww.'”

See some excerpts about the direction of the title and the character below and be sure to read the full interview on Newsarama.

Newsarama: Pat, first of all, who came up with the idea of you sticking to Damian, but writing? How did the project come about?

Patrick Gleason: It’s funny, actually friends and co-workers have been talking to me for awhile about writing a Damian book! My Batman and Robin editor Rachel Gluckstern, along with Doug Mahnke and Pete Tomasi to name a few. It’s a really great feeling to have that kind of supportive consensus from friends and co-workers. DC also knew I was really in love with Damian from my run with Pete on Batman and Robin. They had approached me about doing some of my own writing last year. They seemed very interested in growing the artist/writer dynamic, and obviously I was too. But I was so invested in Batman and Robin that the timing for me to do another project on the side would have been tough. Later, when Pete and I learned that Batman and Robin #40would be our last issue, I had new opportunities presented to me to work on as an artist, but I really wanted to try something new and tell stories. It was really exciting to see lots of other creators taking risks and going new directions with their new books. and I was hearing about all these big ideas and concepts coming up at DC — it only threw fuel on my fire! I wanted in! Soon I was talking to Bat-editor Mark Doyle about the future and a new solo Robin book. I really loved what the books under him were doing, so I asked Mark if I could pitch him a few crazy ideas for Damain and he said yes! So I did some sketches (one of which turned into the cover for Robin: Son of Batman #1) and a pitch. Once it was in, the response from Mark and DC was very positive and exciting. Before I knew it, I was traveling to New York and attending a Batman writing summit with amazing Bat-creators and editors and on my way to writing and drawing my own comic book. It’s like a dream come true.

Nrama: OK, let’s talk about Damian’s state of mind as you pick up his story in Robin: Son of Batman #1. We learned in Batman #40 and Divergence that Batman is assumed dead, and the “all-new” Batman, Jim Gordon, is attempting to take his place on the streets. What has this done to Damian personally, and how does it contribute to the story you’re telling?

Gleason: Obviously, with the events spilling out of Batman #40, things are definitely going to be different for everyone in Gotham! But for Damian, we’ll focus on his world that stretches far beyond the city. Also we’ll look back into his past to see what it means to his future. I’m interested in unwrapping the layers about how Damian sees himself and what it means to be the “Son of Batman.” Talk about pressure! Think about it. No one else can claim that legacy. It is what truly defines Damian and makes him unique as a Robin. No matter what, there isn’t any other Robin that can claim that. I think that’s a really fascinating lens through which to view him.

Nrama: Does he have any contact with the all-new Batman/Gordon?

Nrama: What’s Damian’s goals as he begins his journey in Robin: Son of Batman #1?

Gleason: Damian is at a crossroads — like everyone is at one time or another. He’s proven that he’s the best Robin to his father and others in the Bat-family. But now, once and for all, he’s going to have to prove that to himself. Even though Damian has found a new life in Gotham, he still had a whole other life before he ever set foot in the Batcave. There are many far reaching secrets that fester beneath the surface and threaten the new life he’s found. When Grant Morrison first wrote young Damian, he was being thrown into his father’s lap by his mother Talia Al Ghul. We saw a little boy assassin on a journey that eventually led to him taking his first steps away from his old life and down the narrow path that Pete and I tackled as he was becoming the Alpha and Omega of Robins. Now the question is, where does he go from here? In #1, Damian finds himself at a new precipice, and he has to make the choice to step out on his own and risk the unknown yet again. Only now he has his father’s voice, and others, ringing in his ears. Damian is on the next leg of his journey to find out what his future holds and whose legacy he’ll ultimately inherit.

Nrama: Despite the sadness that I’m sure comes from losing his father — and from remembering his life with Talia — Damian has always added an element of fun to the world of Batman. Is that part of this series?

Gleason: Yes absolutely. That’s a huge part of what I want to bring and continue on in this book. That’s not to say I won’t be dealing with serious emotional issues, but I’m not focusing on the ramifications of what happened in Gotham and Batman at all in the beginning. It’s more about expansion and Damian finding out if he can live up to the new life and calling that Batman has given him. After all we’ve been through recently with Damian’s death and the grief that followed with Batman, I feel this book is perfectly timed for some fun and adventure — and who better than Damian to lead the charge?

Nrama: Does he have any help in his journey? Who else play a role in the series, either as supporting cast or otherwise?

Gleason: Well, it’s obvious Damian doesn’t play well with others, but he’ll find he can’t outrun his responsibilities. Part of the fun is watching him figure out how to deal with other people. There’s going to be a lot of new faces! Right off the ba… (do you see what I did there?) we’ll get to meet a huge, red, wooly Bat-creature named Goliath. There will be others too, but I can’t say any more right now.

Nrama: What type of villains does Damian run into? I know he’s dealing with his own personal journey, but will there be villains?

Gleason: There will be villains! I’m really interested in expanding Damian’s rogue’ss gallery. And we’ll find he’s made, rightly or wrongly, enemies along the way. Some will be familiar faces to Batman and Robin readers as well as lots of new and exotic ones that I’m really excited to debut. In the first issue we’ll meet someone who knows at least one of Damian’s dark secrets. Ultimately though — cue dramatic music — Damian may find out that he is his own worst enemy!