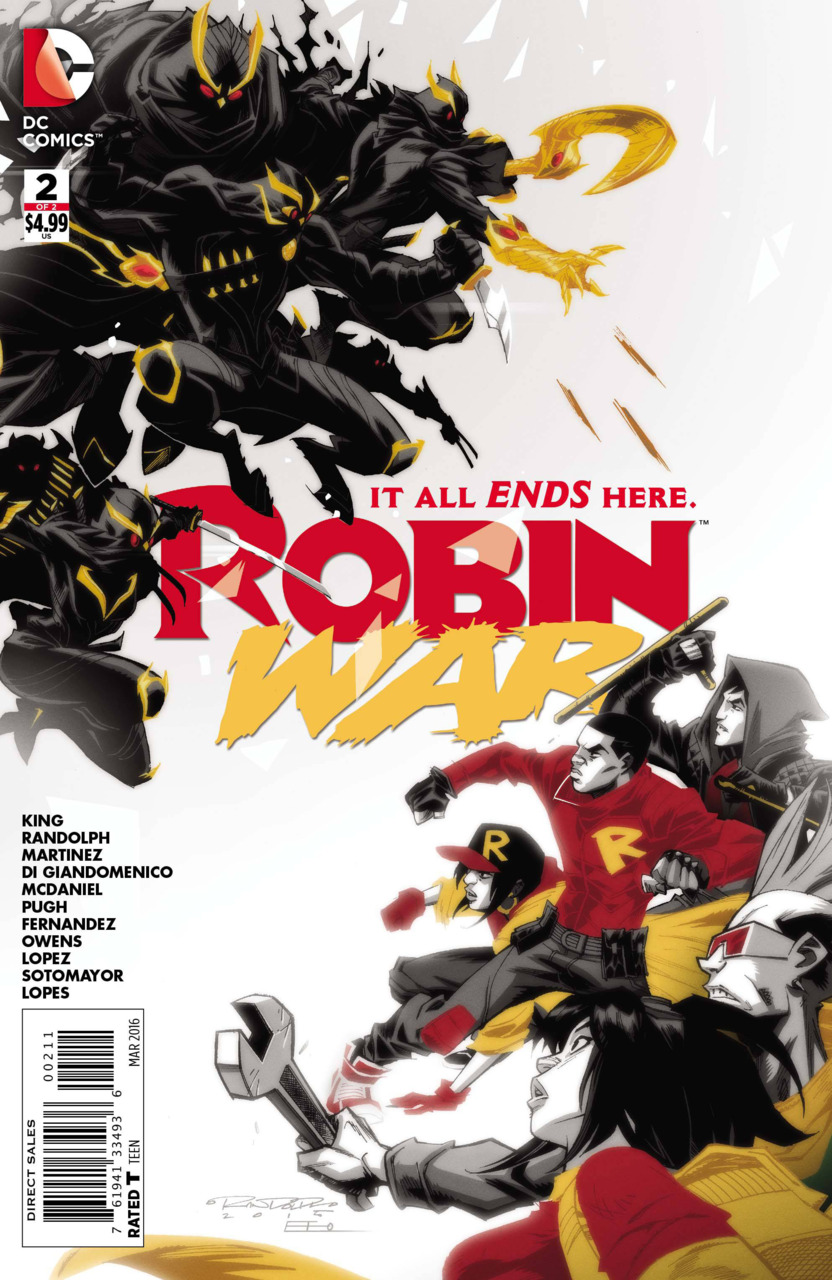 Well, the war is over and, unfortunately, it did not exactly deliver the big ending I was hoping for following the end of Robin War #1. Granted, this issue had some cool moments and was an enjoyable read but, as a conclusion to the event, was not as satisfying as I would have liked.

The tease and then subsequent absence of Nightwing was a big disappointment for me. Despite Grayson’s future solicitations indicating his return to dealing with Spyral, it felt like this event could somehow bring back the fan-favorite character, even with his success in the Grayson series.

The other disappointment I had with the issue was the Court’s plot to threaten Damian with the release of “berserker” Talons. Even after agreeing to join them, they were still released on Gotham. Damian is always pretty smart about these things so it was just a confusing turn of events and a little uncharacteristic of him as he fought alongside the Talons. On a larger note, the final problem I had after reading the issue was still being confused by Dick’s actions to lock up the Robins in Grayson #15. Ultimately, they broke out and ended up in a street brawl with an army of Talons so it did not seem to do any good to try and imprison them while he solved the mystery behind the Robin Laws.

There are positives to take away from the conclusion to Robin War. King nails it when it comes to writing Dick Grayson. The dialogue is fun and entertaining but still carries weight when we get the intense scenes such as Grayson’s “sacrifice” to join the Court. This really showed his devotion to his family which has always been a key element to the character. Other moments like Damian refusing to shake Bat-Gordon’s hand as well as Duke befriending Damian shows that King was able to handle these characters on a larger scale and still give both funny and touching moments amidst bombastic action scenes.

As far as artwork is concerned, it had a “mash-up” of different artists that seemed to combine all the art elements of the different books crossed over into this event. My favorite artwork was found on the pages by McDaniel and Owens who delivered bold action and character/facial designs that conveyed emotion.

Ultimately, the scope for this event seemed too big to be wrapped up in a handful of issues. The creative team only had two months to wrap up a story that crossed multiple titles and dealt with a villain that even Bruce was never able to eradicate. Again, the issue itself was entertaining but just not a fitting finale for the event. I will admit the ending with Grayson joining the Court was a nice cliffhanger and has me excited to tune in to the Grayson series.

Synopsis: The final issue of Robin War opens with a member of the We Are Robin movement sitting at home watching television while saying the line “I’m not Robin”. We are next shown moments from past issues such as the Robin’s escape from the prison called “The Cage” as well the scene where the older Robins order the new Robins except for the core We Are Robin members to go home given the enemy is the Court of Owls.

Outside Gotham Academy, the Robins discover that Damian has become a member of the Court of Owls. Damian orders them all to stand down and that he has “fixed” the problem.

Underground, Grayson confronts Lincoln March who orchestrated the Robin Laws and the search for the next “Gray Son”. He explains that he offered the title to Damian when he threatened to turn an army of Elite Talons loose on Gotham if he refused.

Above ground, Damian puts down all the Robins with some assistance from accompanying Talons. Duke is the only one to get back up and to continue fighting.

Back in the Court’s lair, Lincoln produces the Nightwing mask and explains the connection between Nightwing and Owls. As Grayson starts to pummel Lincoln and tries to burn down the whole lair, Lincoln threatens to detonate a nanotech bomb inside Damian, that was transferred through his owl mask, if Dick does not accept their offer.

In the streets of Gotham, the police have surrounded the Robins who have gathered to battle the Talons. Damian is still fighting Duke when the Elite Talons show up and attack the GCPD. Duke is desperately trying to remind Damian who he is and why sacrificing himself like Bruce is not the answer. Just as a Talon is about to kill a We Are Robin member, Damian saves him and discards the owl mask. The whole Robin army, as well as Bat-Gordon, are now battling in the streets and eventually turn the tide against the Talon forces.

Later in the Batcave, the original Robins discuss Dick’s betrayal when he had them locked up. He defends his actions and his absence from the major fight by saying he collected the evidence to expose Councilwoman Noctua. Dick ends the scene by saying that they should help him because they all do this for Batman and each other.

In Gotham Cemetery, the core members of We Are Robin mourn the loss of Travis, the Robin involved in the liquor store incident which sparked the creation of the Robin Laws. Duke leaves the group saying “We’re not Robin”. He meets up with Damian later and, after some banter, goes with him to see a movie.

The issue concludes with The Parliament of Owls welcoming Dick, as he places an owl mask on his face, into their ranks as the “Gray Son of Gotham”.