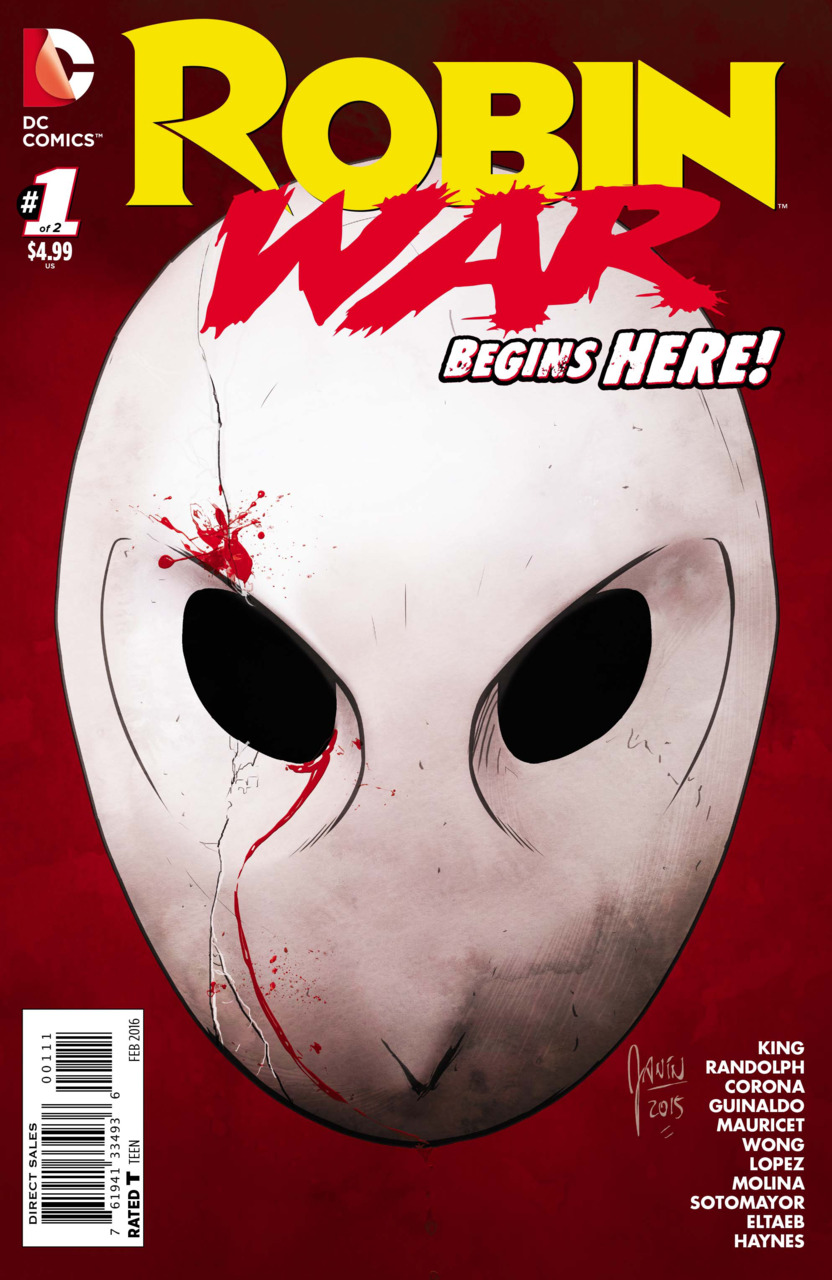 The war has finally begun. I have been looking forward to this event for some time and just could not wait to see all the Robins meet up with a new Batman and a threat like the Court of Owls. We Are Robin has been solid on its own so the inclusion of all the former Robins into the mix was the perfect way to up the ante. This first issue had a few problems but, overall, it did what a first issue should do in that it provided some exciting scenes as well as teased what was to come without giving too much away.

Synopsis: The issue opens in a liquor store as a member of the Robin movement is taking down a would-be robber. During the takedown, a policeman enters and orders the Robin to surrender. The boy, confused, argues that they are on the same side when the robber gets up and kills the officer. As he turns the gun on the Robin, the boy shoots the robber dead and collapses to the floor repeating the line “I’m Robin”.

We are shown various news networks reporting on the incident and the growing problem of the Robin movement. Following the broadcasts, Councilwoman Noctua is at a dinner with members of the press and informs them of the passing of “The Robin Laws”. The laws will make the symbol of Robin illegal as well as allow police to use brutal force to uphold the new law in enforcing the new law.

Later, a police officer confronts Duke on the street and places him under arrest for wearing red shoes which are a symbol of Robin. After escaping from police custody, Duke gets on his phone and sets up a meeting for everyone involved in the Robin movement.

Councilwoman Noctua is returning home when she is greeted by the Court of Owls who congratulate her on the passing of The Robin Laws and their success. She informs them that to start their war, she will need a mask.

At a bar in town, Jason Todd knocks a guy out who argues with him over the Batman and Robin partnership. After leaving the bar, Tim Drake calls him and informs him that the real Robin is in town and that they need to get to him before he finds the other Robins.

In Aparo Gymnasium, Duke is addressing all the members of the Robin movement and is asking for the person in the liquor store incident to turn themselves in. As Duke finishes his address to the group, Damian Wayne descends from the rafters calling Duke moronic and stating that he is, in fact, Robin. Damian then starts a fight with entire Robin “army”.

Despite being opposed to the new law, Gordon is called into action as Batman by Noctua against the Robins. Arriving at the gymnasium, Gordon places all the Robins under arrest. After Damian expresses his disbelief about the new Batman, he and Gordon begin to fight. Damian gains the upper hand and takes Gordon down. Jason and Tim show up and tell Damian to join them in helping the Robins. They decide to call in Dick Grayson for help after he finishes up a mission for Spyral.

Later in the evening, on his way to give his side of the story to the authorities, the boy involved in the liquor store shooting is murdered by a Talon. In the final scene, the Court of Owls discusses the start of the Robin War and the return of the Nightwing.

Like I said, getting the former Robins involved was awesome. I like the grittiness of We Are Robin and seeing amateur vigilantes take on the crime war in Gotham has been entertaining. That being said, when each former Robin showed up in this issue it just elevated the story with each arrival. My favorite scene was by far the return of Damian. To see him berate the young Robins along with Tim and Jason was definitely fun and reminded me of the Damian in Tomasi’s run of Batman and Robin. Not to mention the action packed scene of him taking down the entire We Are Robin army and the new Batman just made Damian’s return very satisfying.

The Court of Owls’ plan still seems to be a mystery but Dick Grayson seems to be a part of it. I know the tease in the last panel of the eventual “rise of the Nightwing” got me very excited for what is to come. Grayson has been a very entertaining series but I know I have always been looking forward to the return of Grayson as Nightwing since the Forever Evil arc.

The creative team really put together a good issue as far as dialogue and artwork is concerned. I really felt that the artwork was a blend of the various series that are being put together in this event. The writing was strong in that there was a good amount of both humor and emotion worked into the dialogue.

I only had a few complaints of the issue. The policeman arresting Duke for the red shoes seemed a bit of a stretch even with the obvious brutality the police were dishing out citywide. The other problem I had was Gordon’s unwillingness to go up against the Robins. He had already proven in multiple series that he was not against confronting vigilantes to get them to stop. The councilwoman was not telling him to be brutal with them so I am not sure why he was so against it.

Overall, the issue got me hooked and I am very much looking forward to seeing this story play out. I would definitely recommend this to anyone even if they are not following each of the series involved in the event. Let me know what you thought in the comments below.