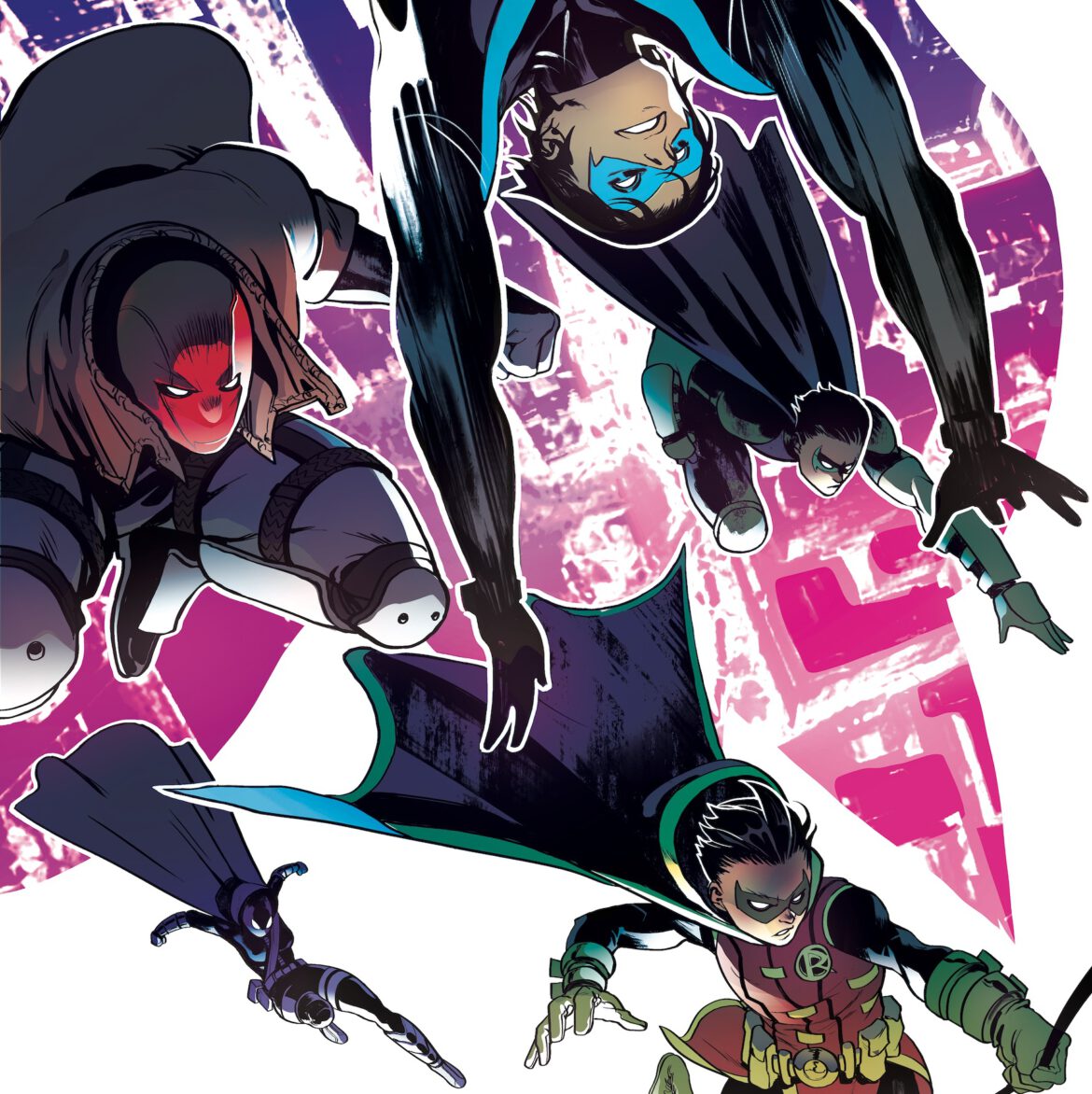 Synopsis (spoilers ahead): As Robins #1 begins, a mysterious woman recites the rhyme of Jenny Wren, and she catches a chick falling from the nest, then tosses a grenade into the nest, harming several visitors at the park, and leaves, promising revenge on those who kicked her out of the nest.

In Bludhaven, the Devotees of Anarky plot to blow up the sewers, when Nightwing interrupts them – but he’s brought all five of the Robins with him – Jason Todd (Red Hood), Tim Drake (Red Robin) Stephanie Brown (Spoiler and possibly Batgirl), and Damian Wayne (current Robin). As the Robins banter, bicker, and beat down the would-be terrorists, Red Hood kills one of them with their own bombs, and they successfully guess the password (the letter “A”, evidence of the cowardly and superstitious – and unimaginative – lot). Red Hood and Robin attempt to leave the mostly successful scene of the fight, but Nightwing insists that they meet to discuss their time as Robin.

At Dick Grayson’s air-conditioning-less apartment, the discussion begins, Dick relating how he chose to be Robin, Steph that she Graduated to Robin (for a tragically brief seventy-one days), Tim demanded to be Robin, Damian was born to be Robin, and Jason was drafted for a War on Crime. As they finish up their preliminary statements, Tim receives an alert that the Bat-Computer is locked down, Steph sees a Robin at the window, and a gravely injured man bangs open the door, saying that someone’s kidnapped three very important villains in the Robin’s lives – Jose Garzonas, former ambassador whose son faced Jason as Robin in a chilling case, Maat Shadid – the assassin Scarab who faced Steph as Robin, and Makenson Innocente, the Obeah Man, who killed Tim’s mother and paralyzed his father – all from the cases that Batman called the “Gauntlets.” The man himself is part of Dick’s gauntlet, but is shot through the window in the head and dies in Dick’s arms as the Robins scramble. The mysterious woman from the opening sits atop a water tower with a bag full of grenades, claiming to be the First Robin.

Analysis: Though this comic created controversy before even one page or cover was released due to the online Round Robin contest, which it won, Tim Seeley is not resting on his internet laurels here. He jumps into the controversy three times in Robins #1 with only twenty pages in the comic – first featuring a clearly Q-Anon-inspired “Devotees of Anarky” cult that the five Robins face to introduce us to their different personalities and give us an action scene right off the bat. Second, the plotted summaries by each Robin about their history with Batman, and their relationship to the role of Robin, will stir a bit of furor, as it always does when a writer attempts to define the Robins in contrast with each other – and Seeley tends to do a lot of crystallizing and boiling down, as seen in the famous (perhaps infamous) panel of Cassandra Cain touching Dick’s heart, Jason’s hand, and Tim’s head in Batman and Robin Eternal #3. I don’t think Seeley is boiling the Robins down to ONLY these traits or experiences, but he is trying to convey that these traits and experiences set them apart from each other. Especially in Seeley’s characteristic breezy and often joking writing, but always carefully crafted and polished, many fans believe the emphasis is misplaced, nuance is lost, and characters are ruined. I find it effective, even if sometimes characters lose a bit in Seeley’s process (someone pointed out to me online that Steph’s worries that she “peaked” as Robin seems to ignore her very successful time as Batgirl a year or so later, which is definitely back in continuity now as of Nightwing #85. The second issue is out on DC Universe Infinite, and once again the fan uproar is deafening (but thankfully, only on Twitter, so hopefully readers will pick up the comic and make up their own minds).

Third and lastly, Seeley courts controversy – this time almost certainly deliberately – but leaving large hints that the mysterious villain we see at the beginning and end of the comic is actually the true First Robin. To me, such a claim clearly misdirects the audience. I cannot blame people for being agitated, since Seeley is deliberately trying to get people invested in the mystery – but I have no real belief that such a retcon will happen. You might have something like that occur in the main Batman series, as we saw in Batman and Son, with the re-introduction of Batman’s son – but almost certainly not in a six-issue miniseries.

All in all, the beginning of the Robins miniseries continues the pleasures Seeley provided in the short digital-only (as of now) comic Gotham Nights #12, which featured all five Robins captured…once again by a mysterious villain. Artist Baldimar Rivas provides generally appealing, but occasionally oddly warped-looking Robins and villains, with a simple, cartoony, but not overly caricatured line. Though not the most polished or devastating art on the stands, it’s perfectly serviceable, and Rivas definitely manages to capture Seeley’s humor and zany energy. On the whole, this Robins miniseries is off to a solid start on the craft front, greatly outpaced by the various controversies – but still well worth checking out if you enjoy any or all of the Robin characters.

Baldimar Rivas’s main cover features all five Robins leaping into space, from the top left corner to the bottom right, though focus is a bit hard to tell. Babs Tarr provides the heated “workout” variant of Dick Grayson for Robins #1, for those who prefer their Robins a bit less formally attired.

Tim Seeley and Baldimar Rivas produce a workman-like comic, which begins an exploration into one of the most heated parts of the Bat-Family - the five Robins, their pasts, and their relationships with each other and Batman.