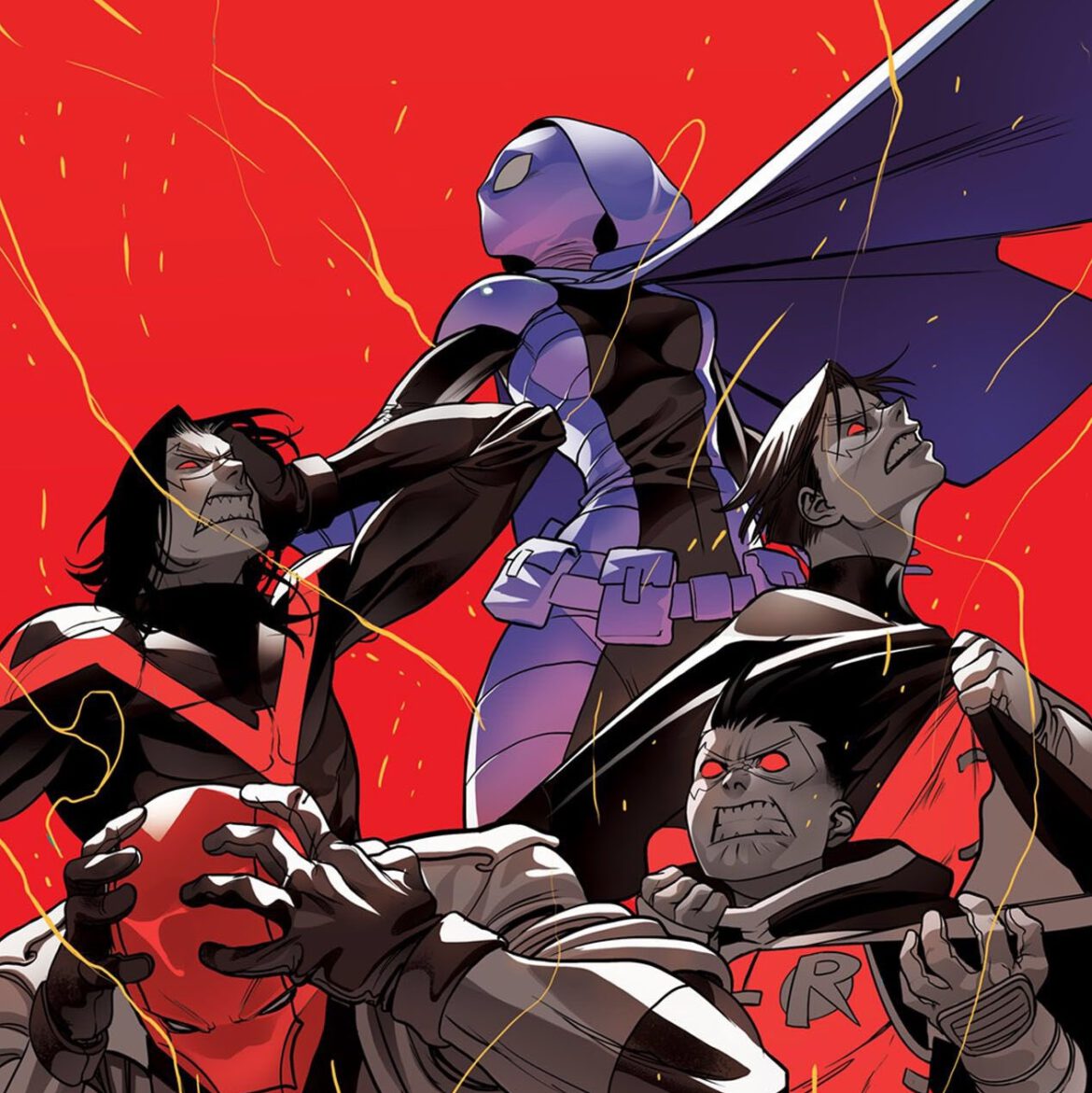 Overview: In Robins #4, the Bat-Family tracks down Anarky, believing that he is responsible for the Devotees of Anarky. Meanwhile, Batman investigates The Escape Artist, a new supervillain in Gotham.

Synopsis (spoilers ahead): Robins #4 begins as Anarky observes the Robins as Nightwing, Red Hood, and Robin fight legions of villains, noting a darkness to their battles, and that Red Robin is MIA. Meanwhile, Tim breaks free of Jenny Wren’s ropes, but she arrives to smack him down.

Downtown in Gotham, Bruce Wayne announces a project to open a children’s mental health hospital but is taken aback by someone he sees in the crowd.

In the tunnels between Gotham and Bludhaven, Red Hood, Robin, and Nightwing corner Anarky, but he claims that he is not responsible for the Devotees of Anarky (DOA) the Robins battled in Robins #1. Despite his denial, Red Hood captures him, but Spoiler stops Red Hood before he can shoot the teen antihero with a phosphorus grenade (taken from her dad’s old gear). Steph tries to tell the three that they’ve gone too far, but Jason and Dick reject her arguments – while Damian sees the truth of her observation and convinces them to consider Steph’s investigation at Dick’s apartment.

Steph reveals what she learned from Neophyte – Lydia Arbuckle, the girl the Robins captured in their raid on the DOA – that Mr. Neg aka Eldon Shaw, the leader of the DOA, was using technology developed by Cormac Dodge (supposedly deceased) to implant a chip into his followers’ brains, controlling them, which explains how the Junior Super-Criminals were “programmed” to become their idols in Robins #3. Dick gets a text from his contact on the Bludhaven police that someone used a sling to kill the man in his apartment in issue #1, another link to the history of the Robins, as Dick used one when he started out, and Tim rejected the weapon because of its lethality. The four Robins look at the four chips Steph recovered from Neophyte’s apartment, and Dick tries the first one out, collapsing once the light shines into his eye.

Meanwhile, Batman investigates the man he saw in the crowd and reveals he knows Cormac Dodge, the developer of the technologies used by the villains so far, as a supervillain known as the Escape Artist.

Tim wakes up to Jenny Wren gloating over him and tells her that he pieced together her plan – but she reveals that she tricked him into revealing the back doors he created into the Batcomputer.

Dick wakes up in a strange room, with Helena Bertinelli, Matron of Spyral, sighting through a rifle out the window, addressing him as Agent 37 – his past life as a super-spy.

Analysis: For the first time, Tim Seeley tips the writing in his story from teetering on the knife-edge of frustrating and enjoyment firmly into the “unadulterated fun” side of the equation for Robins #4. After three issues, which courted controversy among the divided fans of the five Robin characters, Tim Seeley let four of the five shine – Dick with a feeling of responsibility for the other Robins and ability to connect to others, Jason with his balance between deadly violence and a desire to be a hero and take responsibility, Steph with her understanding of motivation and empathetic investigation skills, and Damian with his caustic wit and ability to penetrate his family’s defenses. Tim suffers a bit, both literally as Jenny Wren’s prisoner and with his reputation as she tricks him into doing her bidding – but hopefully, he’ll get his own heroic moments in the two issues to come. After the wonderful sequence of Tim saving the day fighting through virulent Scarecrow toxin in Batman and Robin Eternal #20, also written by Seeley, I have no doubt that he appreciates Tim’s skills and history.

Speaking of history, Anarky is a perfect choice for a series focused on the history of Robin, since creator Alan Grant (who also wrote a nice little story featuring Anarky in the Detective Comics #1000 Deluxe Edition) intended the teen antihero to be a potential for the next Robin after Jason Todd, though Denny O’Neil ultimately decided on Tim Drake to take the role. His observation and knowledge of the Robins, and his role as a dark shadow of the teen sidekick’s heroism in Gotham, makes him a really nice hat-tip to more of the history of Robin that Seeley’s been exploring all the way through this miniseries. Though this story is now firmly set in the past because of John Ridley’s killing of Anarky off-panel in I Am Batman (though some say that the appearance of Hayley the dog in Nightwing’s apartment indicates it must take place at least after the start of Tom Taylor’s current run of Nightwing), the nod to Anarky’s connection to the Robin legacy is a much nicer farewell than Ridley’s curt dismissal of the character. Damian’s interaction with Steph is a pitch-perfect echo of Bryan Q. Miller’s Robin and Batgirl interaction from Steph’s time as Batgirl, as is Steph’s ability to follow an investigation that no one else is following. Seeley also provides fascinating six plot threads that we’re going to follow in the next issue. Four are the virtual realities that Dick, Jason, Steph, and Damian will follow using Cormac Dodge’s technology hinted at in the cover to issue #5, showing Dick as Agent 37 from Seeley’s co-written with Tom King Grayson series, Jason wearing a racecar driver-like costume, Steph as potentially Cluemaster Jr., and Damian as some kind of mystical monk. The fifth, of course, is Tim’s captivity by Jenny Wren, and the final one is Batman’s pursuit of the Escape Artist, Cormac Dodge (as far as we can tell, a brand new supervillain, just like Jenny Wren herself). Artist Baldemar Rivas, along with colorist Romulo Fajardo Jr., once again gives us a very enjoyable rendering of Seeley’s dynamic and often breezy script, conveying emotion and action with a lot of energy and enthusiasm in Robins #4.

Series artist Baldemar Rivas provides our main cover, with our five Robins struggling against massive internal or mental attack, red eyes, and powerfully contorted bodies conveying their distress, matching perfectly the interior conflict. For our cardstock “workout” cover, artist Jen Bartel gives us a lovely and trim Steph in a purple (of course) exercise outfit, lifting some hefty looking weights, showing off her arms and abs, though in a less overtly thirsty way than the Jason and Dick covers for the first few issues. As a Steph fan, you know which cover of Robins #4 I will be recommending!

Tim Seeley firmly hits this issue out of the park with revelations that drive the plot and our heroes’ relationships with each other forward, with the art ably keeping up with appealing and energetic rendering.