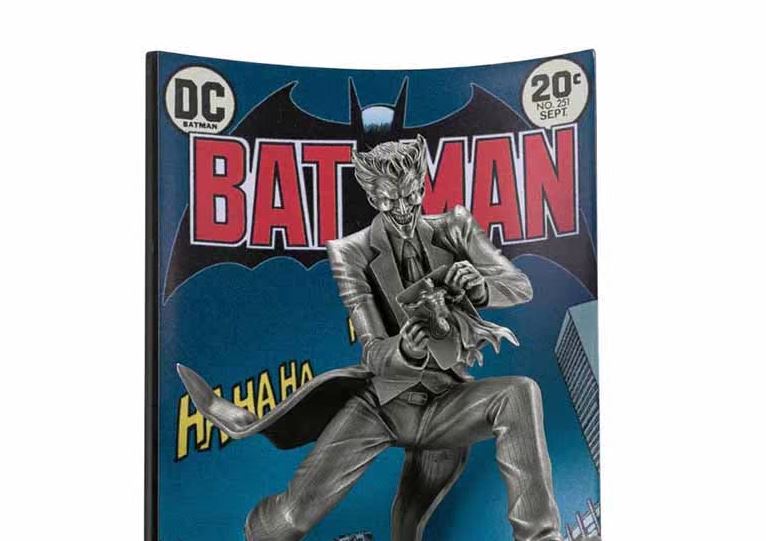 Royal Selangor has released details for their latest pewter collectible statue, which features the Joker from the cover of Batman #251 by Neal Adams. The statue stands just under nine inches tall and has a dimensional look, with Joker jumping off the comic cover. The statue is available in two formats; a silver statue with a colorful backdrop and a gold statue with a monochromatic backdrop. The gold version (gilt) has a limited run of 200, while the standard silver version has a run of 800. Both versions are expected to ship between September and October 2022. You can find more details below, including pricing and preorder links to Sideshow Collectibles.

As the Joker wages a campaign of retribution on the traitorous cabal responsible for his capture, Batman falls into the unhinged villain’s clutches. How will Batman get out of this one? Will the Joker prevail? Illustrator Alan Quah and sculptor Mufizal Mokhtar’s impactful interpretation sees a menacing pewter Joker looming out of Neal Adams’ dramatic 1973 cover art, with Batman seemingly helpless. A limited edition of 800 individually numbered pieces worldwide, don’t miss your chance to add this statue to your DC Comics collection today!

Neal Adams’ surrealist 1973 cover encapsulates the overwhelming madness and malice of the Joker, his grasp on terror over Gotham as tight as that on a seemingly helpless Batman. Against a black and white replica of Adams’ cover, illustrator Alan Quah and sculptor Mufizal Mokhtar’s take on the unhinged villain is made more dramatic by 24K gilding. Don’t miss your chance to add this statue to your DC Comics collection today!