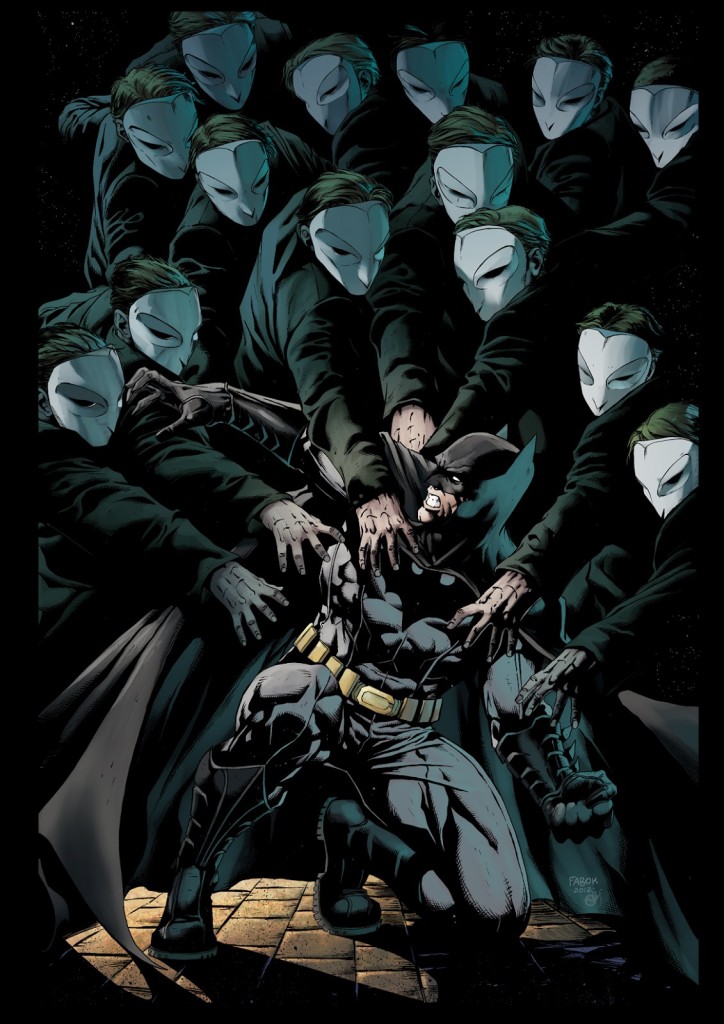 In a recent interview with Newsarama, Batman writer Scott Snyder discussed, among other things, the comments he made at NYCC about artist Greg Capullo taking a break from the book for a while next year as well as his thoughts on the upcoming series Dark Knight III: The Master Race including why there initially were rumors that he’d be co-writing the title.  In the interview, Snyder says that readers should not take Capullo’s hiatus as a sign that the team is done working together or that either member of the team is getting ready to leave the title permanently.  He said they still have plans for what they want to do together on Batman when Capullo returns but has no idea as of yet who will be filling in during that intermediate period.  Also, Snyder said that there was some truth to the rumors last December that he would be participating in the new installment of Frank Miller’s Dark Knight saga.  He said that he was invited to participate in the project but ultimately bowed out because Frank Miller and Brian Azarello had such a great chemistry together, the he thought the book they’d create together would be better in the end than if he were involved.

See the relevant excerpts from the interview below and follow this link to read the whole transcript.

Snyder: Now, I don’t know if this is entirely okay to say, but one of the things I’d say is Greg is going to be stepping off the series with Batman #51 for a little while. Not very long, but for a short period. I’m going to hold down Batman while he’s going, and I have some very big plans for that time, which I’m pretty excited about.

Newsarama: This news is probably going to have a number of fans feeling kind of anxious. Is there a reason this is the right move for DC’s most successful and longest running creative team?

Snyder: One of the reasons I’m excited is similar to how Greg is excited about the possibility of working with another writer. I love Mark Millar, and he’s been extremely kind to me over my career. I’m very excited for that book, and I’ve known about it for a long time. To work with different artists, likewise, is a good thing creatively. When I got to work with Mateo Scalera in #34, Jock in #44, or Becky Cloonan in #12, those stories only get to exist with those artists. Again, it really becomes about how do I do the same material with a different artist. It’s going to be good for Greg that way to work with a different voice for a bit, and it will be good for me in that way.

Newsarama: It’s almost as though this will allow you both to return the series together with your creative batteries fresh and recharged.

Snyder: Yeah! Exactly. Who doesn’t want to see more of Sean Murphy’s take on Batman, who is going to be doing some Batman stuff me with in some way… you don’t think that doesn’t make me want to do a new Batmobile? Not only that, but a different kind of story that gets at the same kind of stuff?

Newsarama: Now, I know you’re a big fan of Frank Miller’s Dark KnightReturns, and you were initially rumored to have some involvement on Dark Knight III: The Master Race. Was there any truth to this? Was there a particular reason you didn’t become attached to Dark Knight III in some capacity?

Snyder: To be completely frank with you, it happened like this: I was invited to be a part of Dark Knight III pretty early on. Me, Brian, Frank and a couple of artists. Now, Brian and Frank had a real rapport from their history together. Also, the work was extremely intense, and that required going to Frank’s studio and talking to him daily about it. Having two young kids and having the workload that I have… well, I realized that while I was invited to help them do it, I wasn’t going to be doing them any favors being a part of it. I would constantly be in a place of constantly catching up.

And to be fair, it’s a dream project. Of course I was honored and thrilled to be asked to be a part of it. But honestly? I’m happier seeing what they’ve been able to make. I feel like I would have been some sort of albatross in the way of that project. I love Frank, I love Brian, and I cannot tell you how excited for and supportive of the project they’ve made together. That’s all it was. I couldn’t make the commitment needed to be a really helpful part of the project where Brian could. He had the relationship with Frank that was far deeper than in the way I knew them, and I really felt like bowing and letting them do it would make it a better book.

Newsarama: Although you’ve cited Miller’s influence on your work, it strikes us how vastly different you both see Superman and Batman in the world of the superhero. In Miller’s era, his Batman is one that needed to be an object of fear to combat the dangers of the streets of New York City in the 1980s. Your interpretations seem to embody more contemporary understandings of the characters who are deeply founded upon a more gothic and yet transcendental and aspirational basis. Even your respective takes on Superman stand in stark contrast to one another for similar reasons. I didn’t know if part of your decision was also informed by creative differences on the character or if it was strictly for those more practical constraints and concerns you mentioned.

Snyder: Oh no. One of the best moments from this year was when I was talking with Brian about doing one of the Dark Knight III spin-offs – I thought I had the time, but it’s my fault because I didn’t really have the time. He commented how Frank’s and my Batman are both very different and yet very similar. I was surprised as I find them quite different. He responded that the only difference is that your Batman knows he’s mortal; Frank’s Batman does not. I couldn’t help but think that was mind-blowingly true. But in “Year One,” Brian pointed out, my Batman is quite close to Frank’s. He’s still young and doubtful. So, yes, we are quite different Batman and Superman writers, but there’s nobody who’s influenced me more as a comic book writer and in my vision of Batman than Frank Miller. And Grant Morrison was similar. I love Grant’s Batman so much, but our visions are worlds apart.

Scott Snyder continues his run on Batman with Capullo through issue #50.