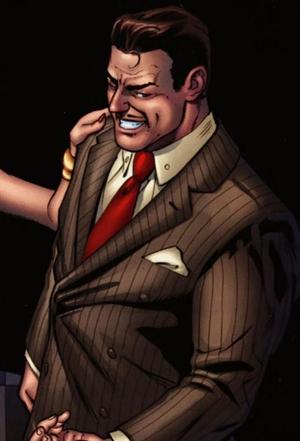 The Batman Universe had a chance to talk to Morena Baccarin (Lee Tompkins from “Gotham”) during San Diego Comic-Con 2016. During that conversation she gave some details about the newest member of the Falcone family to come to “Gotham”.

Morena: “As you know, Lee went away at the end of last year. She went through some hard times, lost a baby..broke up with Jim. She ends up finding love…solace in a new character. It’s Falcone’s son. His name is Mario Falcone, although he doesn’t use the Falcone name. So that’s where you find her when we pick up again.”

Unfortunately for fans of the Jim/Lee coupling, Morena also said “She’s moved on truthfully”, but did add that “there’s that feeling of unfinished business”.

Lee and Mario’s relationship may not be on solid ground. “She’s still piecing herself back together and there’s an element of not wanting to open up too much”, Morena added.

“He’s not affiliated with his father’s business and takes great pride in that. He’s a doctor…he does have a dark side which we’ll find out about as everyone does”, said Morena.

What does all this mean for Gordon and company? “I think there will be some hard times for sure”, Morena teased.

Before wrapping up the discussion Morena mentioned that her pregnancy occurring at the same time as Lee’s was just a coincident but worked out great for maternity leave. “It was like I planned it but I didn’t” she said.

Fans of the comics will remember Mario Falcone. It remains to be seen if he’ll be anything like his comics counterpart.