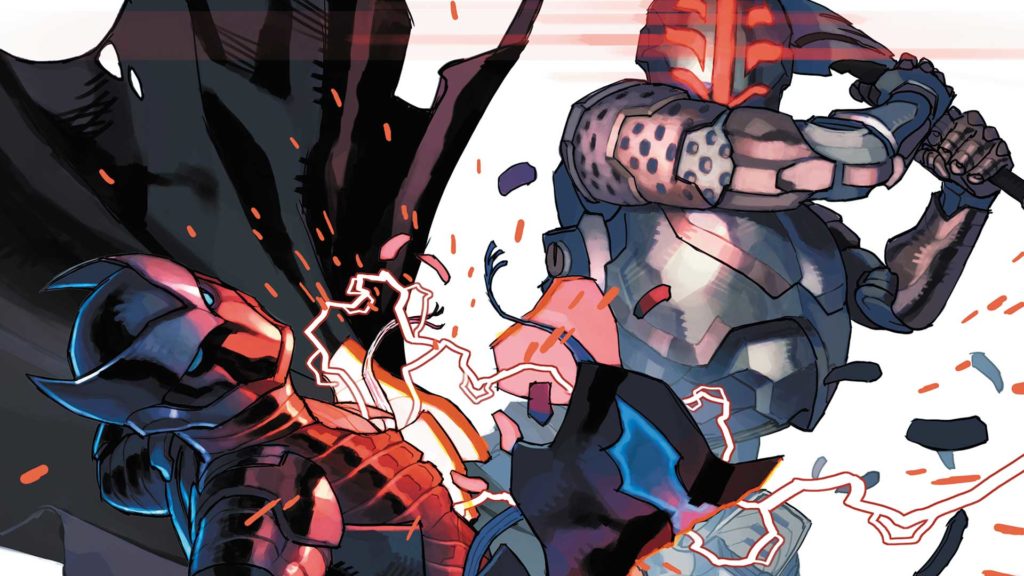 Our next comic creator interview is with James Tynion IV. Tynion has been working in The Batman Universe for over five years starting out on the back-up stories in the pages of Batman, to writing Talon and Red Hood and the Outlaws, to being main writer involved with both volumes of Batman Eternal, all the way to taking over Detective Comics with the launch of Rebirth. Tynion spoke with us about all of the things we can expect to see in the coming months in the pages of Detective Comics.

TBU: One of the difficulties with a team book is that you want to focus on the characters as a team, but also the individual members, so how have you been finding a balance between those two?

James Tynion IV: Honestly I’ve been trying to sort of have each arc kind of focus on two characters’ emotions. I think the first arc was very much about Batwoman and Red Robin, the second arc was very much about Batman and Spoiler with a lesser extent of Clayface and then the third one was very much Cassandra Cain. So it’s just like trying to make sure that every arc kind of touches on each of the characters. The one that’s going on right now has a very big Azrael-Batwing core and then also Batman-Zatanna. I try to vary it up arc to arc because you want to give every character a moment in every arc, but you need to kind of pick and choose who’s really going to be the emotional driver of the story and who’s sitting in the back seat a little bit.

TBU: Azrael has definitely come to the forefront in this current story arc. So what is it about that character that you especially enjoy?

James Tynion IV: I remember when we were working on Batman and Robin Eternal and the discussion really came up to bring Jean-Paul Valley back into the mix. I grew up in the nineties with the Bat-Family and Azrael was a big part of that. It was the idea of a person who is striving to be something more, but had these kind of clear limitations standing in his way. How he was programmed as an assassin before all of this. How he was programmed to be Azrael and the constant tug of war between the kind of the St Dumas ideology and the Batman ideology was so to the core that I wanted to tell a story that kind of got right back to the heart of having him at the center of that kind of tug of war and kind of literalizing it in a weird and interesting way that will play out in the next couple of issues. But, it’s the internal struggle, that’s what really drives and pulls me towards Azrael as a character.

TBU: I really like Jean-Paul ever since Denny O’Neil was writing him. Is there any chance we’ll see a Michael Lane Azrael?

James Tynion IV: I would love to really tie all of the Azrael continuity together a bit more because Michael Lane kind of stood off on his own and a little more separate from the Jean-Paul mythology. I would love to do that. Right now, it’s not on the immediate horizon but it’s something I would really love to do.

TBU: Besides the main cast you have other people appearing in and out like Harper Row and Doctor October. Do you have any plans to really incorporate them into the ongoing story or do you just want them to hop in and hop out when the story demands it?

James Tynion IV: One of the biggest pieces in building my Detective Comics is I wanted to make sure that I was building a kind of the world where each part of the world has its own cast of characters. Then when you have a certain event happen and then that means we’re going to need Dr Tompkins or Leslie Tompkins to come in. When it has to do to with particularly the emotion, like Stephanie or Cassandra’s emotional arcs.

Harper is the perfect counterpoint because she serves a very unique role in the Bat-Family right now as someone who did it and has decided to go down a different path. That opens up a whole bunch of new stories for her and she’ll be showing up again in just a couple of issues. I’ve seen pages of art with Harper Row. She’s coming back up soon. I’ve tried to kind of bring people in and out of the story and allow the team to kind of evolve and it’s my goal to continue that as we move forward.

TBU: Let’s talk about Stephanie a little bit. Right now, she is against Batman right now, sort of his ideology and what he’s been doing, but that one issue is she kind of is Batman even though she says “cops, you can take the credit for this.” Do you see her distinctly different from Batman? Or is she a hypocrite and basically being Batman, but saying she’s not?

James Tynion IV: [laughs] Well the thing that I’m really enjoying in the current Stephanie arc is the fact that she’s a teenager who is just experiencing an incredible bout of trauma. She just saw one of the only people in her life who really saw her and understood her fall in the line of fire who was in this type of life. She’s trying to grapple with her drive to keep the costume on and do good and what that gives her this kind of deep fear that what they’re doing actually hurts Gotham.

And it’s like there is a kind of inherent hypocrisy there. Teenagers are the best hypocrites, I think. Everything is sort of absolutes that contradict each other and it’s an intentional step in our story. It’s something that I’m really excited about how it will play out in the two part Utopia Dystopia arc with Anarky this fall. The way I kind of think of it is that if Tim Drake is kind of like the good guy, high school boyfriend, Anarky is the s****y college boyfriend. Meaning he comes in and he seems like he’s got all of this deep passion in him and a deep drive to change the world but the lengths he’ll go to to do that are frightening. It’s going to tie back into some of the mythology that’s been laid in previous arcs and really set the stage for everything to come in the fall, especially leading into a Lonely Place of Living and the return of Tim Drake.

TBU: Right. So when he returns how’s he going to adapt to this new Bat-Family?

James Tynion IV: The thing that he would be happiest to learn when he does learn of it, is the fact that the system that he put in place before he vanished still exists. Because that’s the fear. That was the fear that he was struggling with at the beginning. It was just like, “alright I can set this in motion, this is how I think Gotham would work perfectly, is if we sort of bring everyone in and we’re all fighting it together.”

And then that could allow him to maybe step back and figure out what he wants. It taps right into the nature of Tim as a character where he’s always put everyone’s needs before his own. In the classic Tim Drake origin, it was the fact that, he didn’t go in there to be Robin, he went in there to try to get to Dick Grayson to be Robin, but when Dick Grayson wouldn’t be Robin he knew someone needed to fill that role and he stepped in. He can’t not act. That’s something that we’ll see the pros and cons of that a bit, but he is going to be very happy that the [team] is still in motion.

TBU: Final quick question, are you going to at all deal with the Batman/Catwoman engagement?

James Tynion IV: We might talk touch on here and there, but that’s Tom King’s arena to sort of play that out.