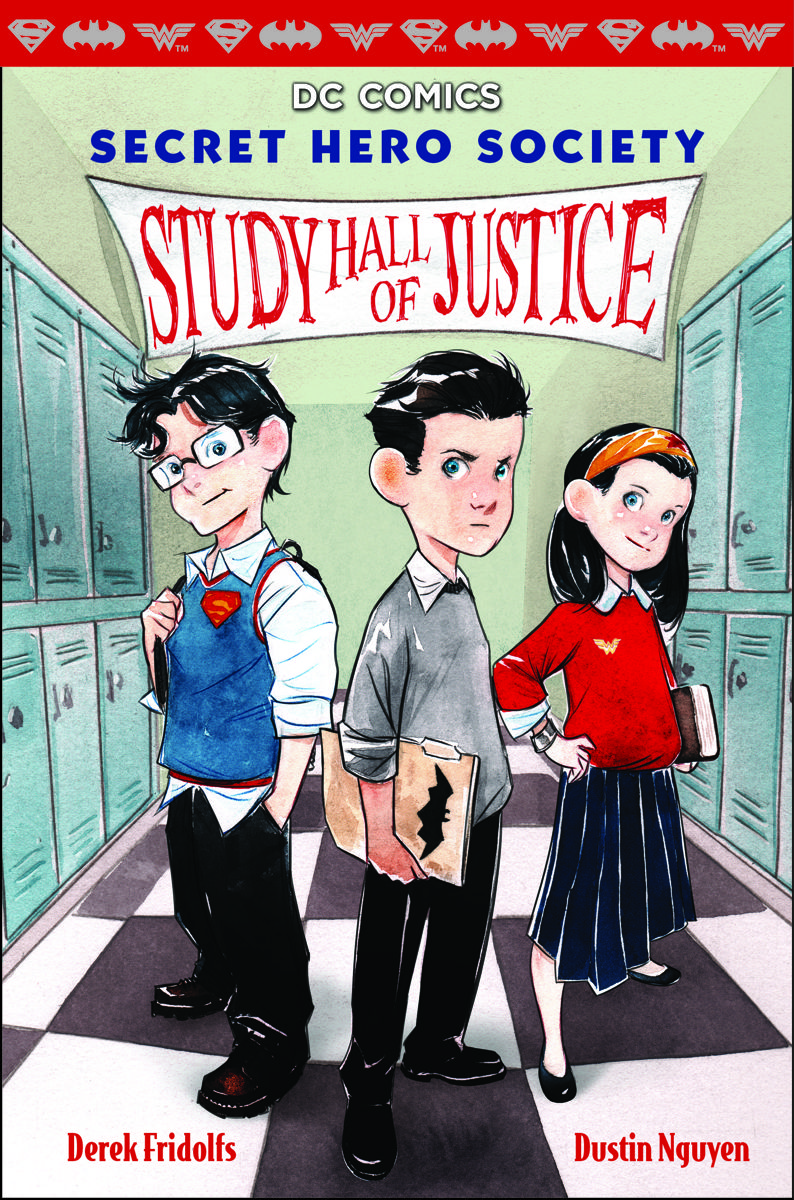 Editor’s Note: This book was previously announced in September and this is the first volume. This is currently available at fine retailers including Amazon.

What if Bruce Wayne, Diana Prince, and Clark Kent all met in an elite middle school for super villains?

Bruce Wayne begins a new school year at Ducard Academy, looking forward to getting away from the mansion. However, something’s not right – everything seems to be dedicated towards encouraging students to be unkind and unjust, as well as constant hints about taking over the world. Plus, Bruce keeps seeing ninjas on the grounds.

Spurred on by these oddities, Bruce begins his own investigation into what’s happening. He runs afoul of a huge kid named Bane and a group of pie-throwing clowns led by a strange green-haired boy and a cheerful blonde pigtailed girl.

Bruce meets spunky Diana Prince and cheerful Clark Kent in class, but initially rebuffs their attempts at friendship. However, after a few days of collecting evidence and being rejected by most of the other kids at school, he sits with them at lunch in the library and has a good time.

Diana and Clark have also noticed strange things, like the school computer/robot, Brainiac, and agree to help Bruce figure out what is going on. Meeting at Bruce’s home, they meet Alfred and begin making plans.

The teachers at the school, meanwhile, have noticed Bruce, Diana, and Clark’s inability to fit into the culture of the school, and Bruce finds a report on their progress mentioning a place called “Nanda Parbat.” As part of the second phase of their plan, Clark joins the newspaper, but Victor Fries, Pamela Isley, and Circe shove all his hard work onto the back page. In his attempts to meet with the principal, though, Clark is inspired to become class president.

Meanwhile, Diana attempts to join the sports team, but cheating and taunting causes rejection once again, despite her superior strength. Bruce assigns her to Clark’s campaign instead.

At Halloween, all the kids dress up – most of the kids as strangely flamboyant figures, but Bruce, Clark, and Diana choose, shall we say, “heroic” costumes. They stumble upon a plot to expand the corruption at school to the rest of the world by the students in the library, but before they can stop anything, the teachers and Brainiac break up the fight. However, the fight shows Bruce that his friends are “normal” humans, and he begins investigating them as well as the school.

Clark’s campaign goes poorly, as his posters are defaced, then covered by Lex Luthor’s competing graphics. At the debate between the two, Clark gives an inspiring speech, but Lex nakedly bribes the teachers and class for grades and popularity, winning the election easily.

The stress of so many failed plans tells on the three, and they quarrel, disbanding their group and efforts to discover the truth about Ducard Academy. Bruce stonily celebrates Thanksgiving with only Alfred.

In gym class, Bane beats Bruce mercilessly, but Clark saves him. Diana is beaten by Talia and her mind games. All three are given detention together. Grudgingly, they work together to escape to Bruce’s new hideout in the basement.

Over the winter holidays, the newly re-formed group exchanges postcards with each other. When the students return, they attend a career fair that seems to be recruiting evil masterminds and henchmen. Bruce is discouraged, but receives a whole locker full of Valentine’s cards in February.

Having hired the Question (Vic Sage) to research Nanda Parbat, Bruce is attacked by ninjas and suspended for a week. With the detective gone, Clark is taken out by Lex, acting for the administration, using Kryptonite, while Diana is also attacked by ninjas. When Bruce returns to school, his friends have become just as violent, unfair, and unkind as the rest of the students. He is forced to escape and plan how to capture them. After he restores them to their right minds, they tell him about the Mad Hatter’s power to control minds, and they change into their “heroic” Halloween costumes to destroy the technology.

The principal reveals himself as Ra’s Al Ghul, and explains the whole purpose of Ducard Academy is to train new assassins for the League of Shadows. Bruce has contacted the authorities with his evidence against the school, and Ra’s and his daughter Talia flee. The three friends return to their homes to complete the school year, but their friendship remains intact.

Reviewing this book is a bit tricky. Dustin Nguyen is one of the finest artists working in comics today, and the concept of this book is incredibly enjoyable (but more on that later). However, two things work against it being a truly memorable entry in Batman, Superman, and Wonder Woman stories. The first is the level of storytelling. Like Nguyen and co-writer Derek Fridolfs’ previous project along these lines, Batman: Li’l Gotham, this series has a sense of whimsy and appealing visual design that draw the reader in. However, the level of stories they tell here is very generic – though fun, no characters really face serious consequences or have intense desires that are fulfilled by the end of the story.

The second thing standing in the way of a truly memorable story is the level of the art. Though Nguyen turns in some truly lovely images – the cover, and several of the splash pages – the comic book sequences lack polish – the linework is much sketchier and lacking in details, and the black and white coloring doesn’t allow the nuance of Nguyen’s characters to really shine. It feels a bit like Nguyen and Fridolfs had a great idea, but not quite enough time or energy to hone the idea and its execution to the fullest potential.

An example of this is the title of the series – “Secret Hero Society” – but in the story itself, the main trio call themselves Criminal Investigation Unit, and Alfred and Ra’s call them Junior Detectives (much to Bruce’s irritation). The idea of a young Justice League (played with in the title of this volume, Study Hall of Justice) is really fun, but it doesn’t get enough play here in the overused templates of horror movies (a completely pointless early scene shows eyes of portraits following Bruce) and school stories (the characters of the villain kids are played alternately for laughs, in-jokes, and serious threats, none of them really melding into each other). All in all, there are a lot of good ideas that vie for page time, leading to none of them being completely developed enough to have a strong emotional impact.

Not all of the elements of the story are weak, however. Bruce’s first attempt to infiltrate the school using theater class makeup and the name “Matches Malone” (and its utter failure) is hilarious, and doubly so considering all the trouble Bruce usually causes in mainstream comics using the Matches Malone identity (War Games, anybody?).  The Valentine’s Day cards are delightful, with notes from Talia, Black Canary, Selina Kyle, and others full of references to mainstream comics characters and their relationships with Batman. Bane’s beating of Bruce and Clark’s rescue in which he unconvincingly fakes being injured are a big highlight – both as a reference to the Knightfall storyline, and a very funny joke reminiscent of the film “She’s the Man.” Lastly, Ra’s calling Bruce “Junior Detective” pays off the repeated references to the trio as Junior Detectives as well as the standard name that Ra’s calls Batman – a delightful allusion.

Another strongly positive element to the book is the design – there are a lot of different textures on the cover, including quite a few shiny reflective sections that catch the eye pleasingly. The experience reading this book is much better as a physical copy, even for this reviewer, who reads almost all comics and prose works digitally – the presentation of the book (design, paper quality and feel, layout) works much better. Part of this is probably the collage/epistolary/document collection nature of the writing – holding the book makes the experience of the different types of writing – comic book panels, journals, reports, postcards, posters, etc – fit together a bit more than the uniform experience of digital.

When first announced, I was quite excited about this series. Adding Nguyen’s brilliant artistry to an appealing concept like this seemed perfect. Unfortunately, this volume doesn’t have the same strengths that other attempts in this vein have had – not the polished art and careful structuring of Yale Stewart’s fan comic JL8, or the complicated and emotionally engaging teen romance drama of Sean McKeever and Takeshi Miyazawa’s Spider-Man Loves Mary Jane. Unlike those two examples of taking superheros and aging them down from their “normal” appearances, there aren’t enough emotional consequences that a reader can latch onto – the friends don’t have a strong enough bond for the group breakup in the middle of the story to have much impact. “Secret Hero Society” attempts to derive narrative tension from a fairly standard cross of Batman story and Harry Potter-esque school story without developing emotional ties to the characters beyond a few nicely delivered references and joke. However, I hold out hope that the next volume will build on this one, and improve the relationships and tension to match the potential of the concept.

An enjoyable but ultimately, a bit shallow entry into the “superheros as kids” genre.