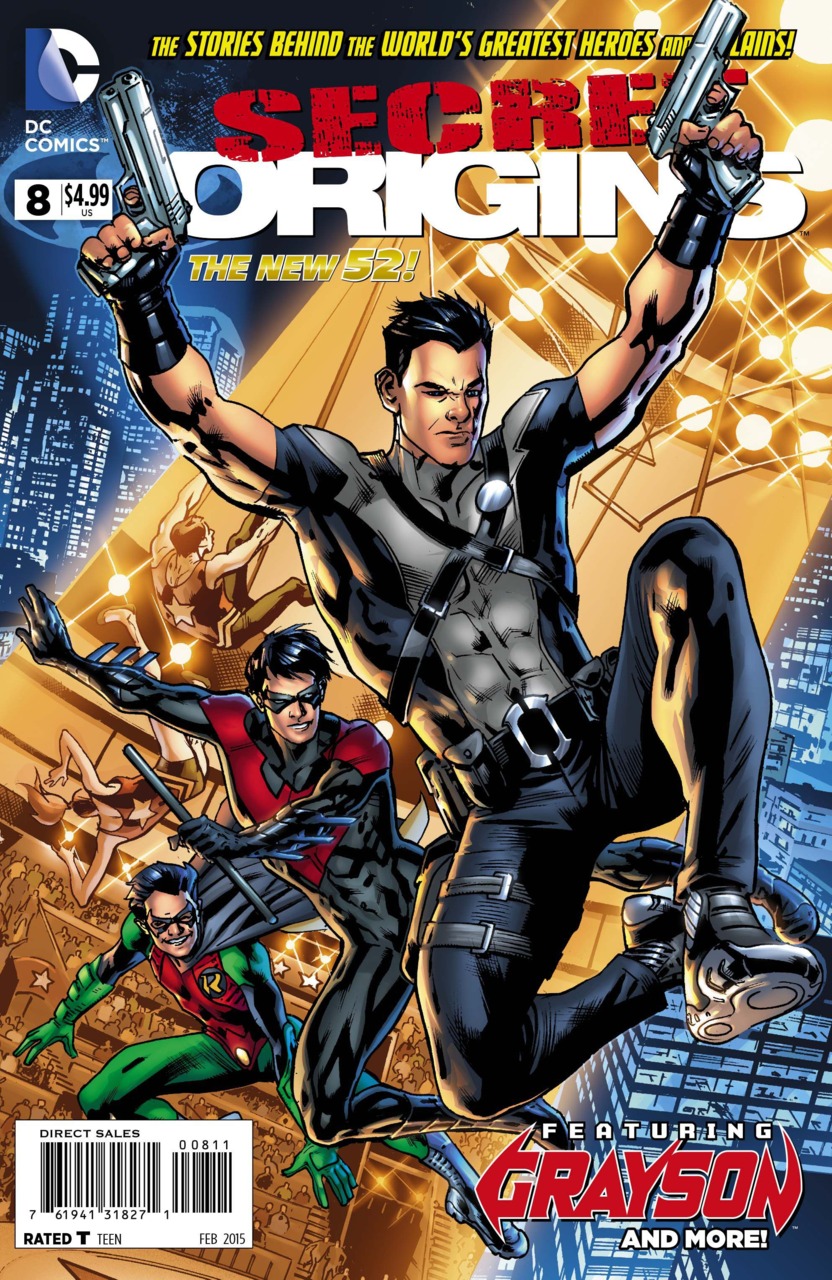 This story from Secret Origins, entitled “The Candidate,” opens at St. Hadrian’s Finishing School where we see Matron Helena Bertinelli reprimanding a student for talking back to her. As she sends the girl on her way, Helena walks towards a painting and speaks a code word that grants her access into Spyral’s inner sanctum…it seems she has an appointment to meet with Mr. Minos.

Minos appears on a monitor and we learn that Helena’s previous partner has died, and under Spyral policy she is allowed to recommend a new agent for partnership. Helena presents that she has a suitable candidate and reveals that she wants Dick Grayson to join them.

We are treated to a series of montage’s with voiceovers by Helena where we learn that Richard Grayson was a young acrobat raised in Haley’s Circus; his parents were killed when Tony Zucco attempted to extort Haley and then arranged to kill the two trapeze artists; Grayson was initially placed in foster care but escaped to seek out Zucco; he then was taken into custody by Bruce Wayne…and somewhere along the line learned of Bruce’s identity as Batman and became his partner Robin; during his tenure, Robin teamed up with Arsenal and was even pursuing “foreign relations” with Starfire; eventually Robin grew up and became Nightwing, and briefly took over as Batman when Bruce was “indisposed;” during the reign of the Crime Syndicate, Dick was publicly unmasked and seemingly died at their hands, however Helena soon discovered that he had survived and has secretly been working to bring down the Fist of Cain. Minos is impressed at Helena’s presentation and research into Dick Grayson, and reveals that he knew about the candidate she would choose…he then reveals a gagged and tied Dick Grayson sitting before her. Minos states that he doesn’t trust Batman or his allies and asks Helena if she would take care of Grayson for him. An arrow quickly flies and Dick slumps over dead with Helena holding her crossbow in hand. Minos applauds her quick actions and reveals that his was only a test of her loyalty, and that Grayson was simply a dummy…he walks out stating that Grayson would be a welcome fit for Spyral and their new mission.

We then cut to the present where Dick and Helena are in a hotel room in Paris and Dick is retelling one of his old stories about battling the Penguin…he delivers his corny punch line as Helena wonders why he always tells his inane stories to her. Dick however is distracted as their targets finally reveal themselves and they prepare to spring into action.

So, I’m not sure why Dick Grayson needed two separate origin stories within this series…we saw in an earlier issue how he became Robin and now we see how we was recruited into the Spyral organization…I guess it makes sense to give a new story to a redefined character after his death? Anyways, other than a retelling of Dick’s origins it was interesting to see how he came to be a Spyral agent and that Helena was the one to nominate him for his position. I also liked that we got some clarification on continuity! During his time as Robin, Dick did team with Arsenal and Starfire and his and Kory’s relationship did happen (that was always a confusing subject when I attempted to read Red Hood & the Outlaws)…however the use of the “Titans” name is left absent, as is any mention of the other members. We also find out that Batman’s disappearance did occur and Dick became Batman…but the circumstances are still left ambiguous.

Overall, this issue was interesting and I can see the reasoning as to why we got another Grayson origin within this series…but I think we could have focused more on another character to get some time in the spotlight. The issue also includes origins for Animal Man and Katana.