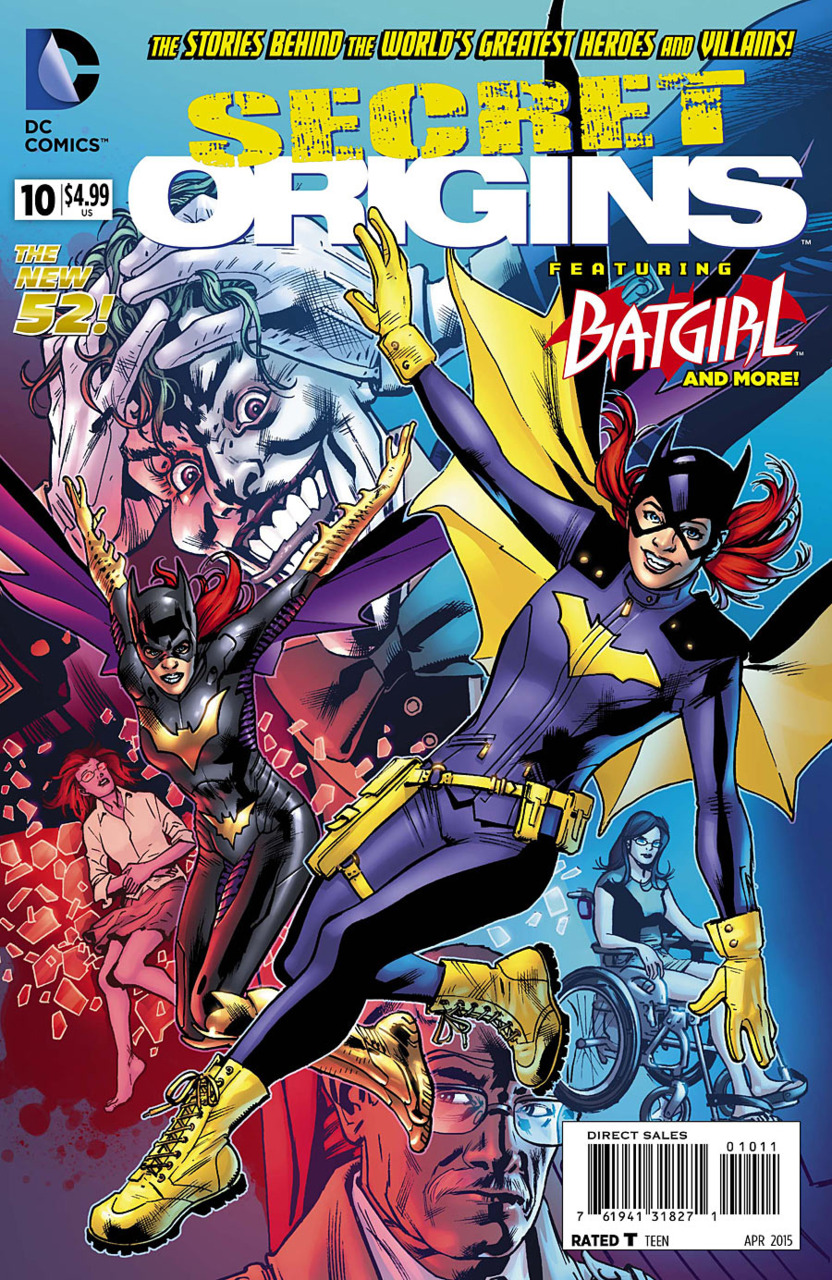 Starting off with Batgirl, the story starts with a monologue voiceover of Barbara Gordon talking about how she always saw herself as being different. As Babs’ eyes open, we find her laying in bed with her dad, James Gordon, looking down on her. We then cut to a scene in a doctor’s office where Jim is discussing a medical treatment with the doctor as Babs looks at her brain scans. The doctor explains that they can program an experimental implant in order to simulate her nervous system and basically allow her spine and brain to communicate…but the algorithm needs to be specifically adapted for Barbara. As Babs looks at the coding, we cut to a waiting room where she is busy typing on her computer and then meets a distraught Frankie. The two realize they have a lot in common and Babs flashes back to her time as Batgirl and when she first donned the costume at the GCPD when she protected her brother James. We then get some more flashes to the events of “The Killing Joke” where Barbara is at home with her dad and opens the door to a sinister smile.

We cut back to Frankie and Babs training with each other and Babs seems to be pushing Frankie harder and harder…she insists that the psychopaths out there won’t wait or care that she has muscular dystrophy. As the monologue continues, Babs talks about how she used the algorithm and her brain scan to develop a way to predict where criminals would strike, and how one could create a team to send in operatives and stop things before they happen. This is when the voiceover starts to break up, and Babs doesn’t seem to recognize who she has become…during this we see flashes of her life post the miracle surgery that allowed her to walk: events that transpired between Batgirl and Nightwing; her and the Joker during “Death of the Family” as well as her friendship with Alysia Yeoh.

As we see more images of the recent “Batgirl” stories, the voiceover starts to encounter errors and seems to not recognize herself…even wondering if she is alive. The story ends with an image of the Burnside Batgirl and the voiceover stating that she will retake what belongs to her and save the city from itself.

Next up in “Green Savior” we open on a farm where a woman is explaining to Pamela Isley that she is being sued by a neighboring farmer for “stealing” their genetically altered crops. She explains that due to the pesticides that they use, her crops might have become contaminated with the altered genes…as she chooses to grow her crops organically. After the discussion, Isley visits the neighboring farm and attacks its owner with poison ivy and then speaks to the crops to learn where they came from.

We then cut to Descanto Industries, where Isley meets with the CEO and discusses a “Job opportunity” with his company. She eventually seduces and kisses him, which releases pheromones in the man’s system to cause him to become infatuated. With him under her control, Isley begins to tell her story of how she became the way she is: talking about her abusive home life which resulted in her mother’s death at the hands of her father; her revenge killing by created a toxin that she delivered via a kiss; her subsequent schooling that resulted in the creation of her enhanced pheromones and then finally the accident at Wayne Enterprises that resulted in her transformation into the villainous Poison Ivy. She then forces several seeds down the CEO’s throat and causes them to sprout and grow, killing him in the process. The issue ends with Isley walking out of the office and declaring herself Poison Ivy.

Overall I have to say that I enjoyed both of these stories…however the true intrigue comes from the Batgirl story. Although it was nice to see a retelling of Poison Ivy’s origin, it was nothing that we haven’t seen before…and could have easily been replaced by any other villain origin.

With Batgirl’s story, it seemed to be leading to something that is occurring within the “Batgirl” title itself…rather than simply retelling a story we’ve already heard, “The Algorithm” seemed to add and even hint at what is to come within the pages of the monthly title. Not only that, we FINALLY got a more clear explanation of how Barbara was able to walk again! Something that some fans (including myself) have been wanting the answer to since issue #1.

I really enjoyed the Batgirl story as it made me think about who may be responsible for the events going in Burnside. It seems to imply that the brain scan used to create the implant on Babs’ spine has somehow been implanted into…something. I’m not sure whether this is an actual person or some form of sentient computer program that was created off of her algorithm and brain scan…it could explain why this “villain” perceives itself as Barbara Gordon, knows the identity of Batgirl, is aware of her attack by the Joker and subsequent confinement to a wheelchair…but somehow doesn’t comprehend or remember anything that happened after she became Batgirl again.

It is definitely an interesting idea that I am eagerly awaiting in next month’s issue of “Batgirl.” In regards to my rating, it is based solely on the Batgirl story as I didn’t find anything special about Poison Ivy and can easily be skipped. This issue also includes an origin for Ronnie Raymond and Jason Rusch’s Firestorm.