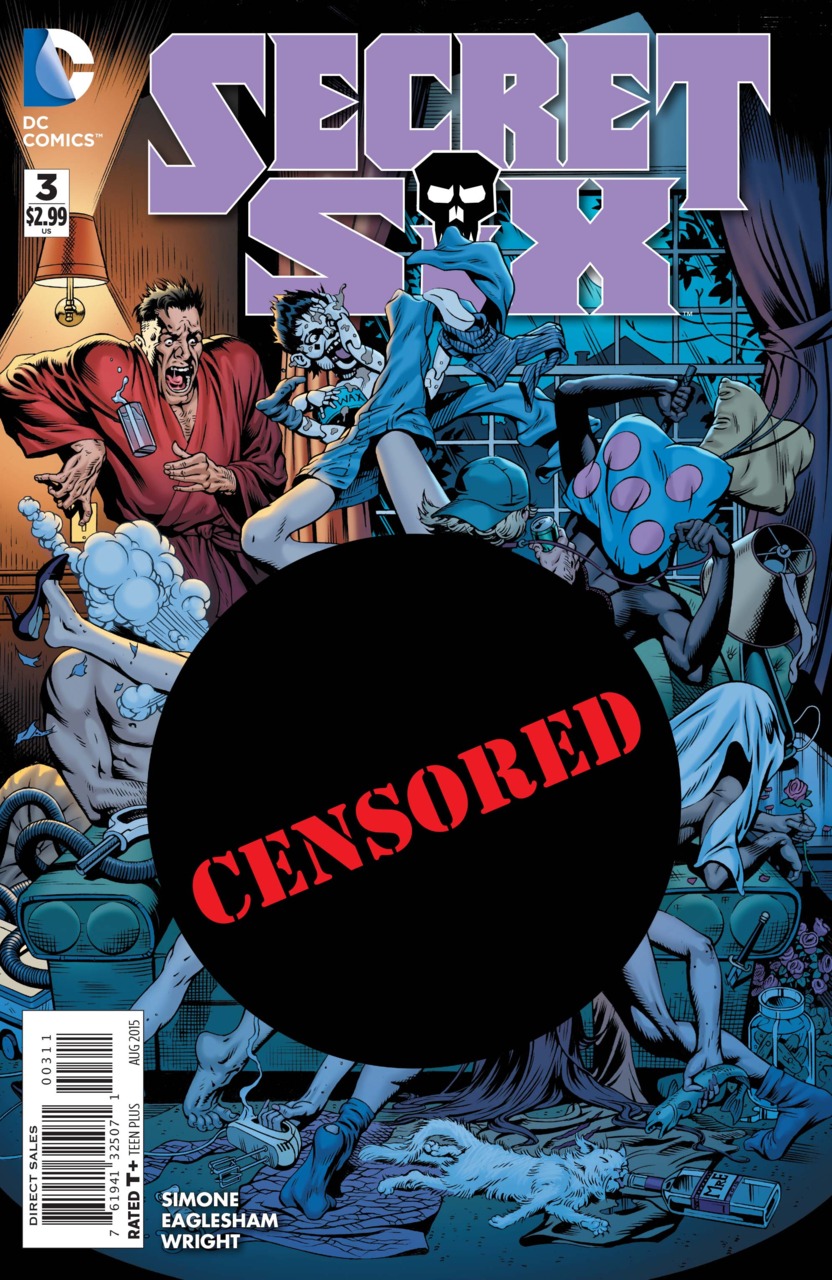 “The Nine Levels of Suburbia” opens with Blake jumping around a suburb. He comes across a man beating a dog. Blake intervenes stating that he hates dogs but he hates “waling turds” like this guy more. We learn that the man is a police officer, a Sergeant Hennings. Hennings thinks that being a cop will scare Blake. Blake retorts that if he sees the Sergeant hitting the dog again, Blake will “teach him to heel”.

Blake enters a house. It is the location the Secret Six is hiding out in. The house belongs to Wells and he chastises the team for a wild previous night. Despite his disgust in the activities of the team, he is still more concerned about the well being of Alice. Alice is still recovering from the shock treatment; she received in the second issue of this series. She tells Wells that her real name is Lori Zechlin. In their conversation, Wells talks about the woman he calls his “forever gal”. He has pictures of her everywhere. Lori asks Wells, why do people who are supposed to love us have to die?   We move to a flashback where Lori is waking up strapped to a hospital bed. She is learning that her parents are dead. We cut back to the present where Lori is kissing Wells on the cheek thanking him for his concern.

The rest of the team complains about their hunger. Blake can cook eggs, “kinda”. There is no food in the house so Porcelain volunteers to “hunt and gather”. Ventriloquist volunteers to go with her and take Ferdie, the dummy along. Porcelain is okay with that. Porcelain in the next panel changes her mind and suggests that the pair leave Ferdie at the house. On their way the pair is accosted by some muscle thugs. Porcelain handles the pair of thugs by just touching them and breaking their bones where she touches them. The Ventriloquist does nothing to help. Back at the house Ferdie just says “television is the devil” without the Ventriloquist being present.

Presumably after Porcelain and the Ventriloquist return we see Mary, Strix coming up behind Blake. Blake is making the eggs. Blake asks her how she likes her eggs, Mary writes: “Dont no”. Blake asks her to set the table. She goes out with the plates, but returns with her head down, she does not know how. Blake says to set it anyway she wants; Big Shot stated that they are to make themselves at home. Mary does not know how “to home” either. Blake consoles her and says to just make it pretty which she does by using Big Shot’s prize rosebush as the centerpiece. Big Shot attempts to bring the conversation to figuring out the “mockingbird thing”. The plan is to lay low while Big Shot tries to find out where Mockingbird is then kill him. In the conversation, Porcelain says that his suburb thing is weird to them. She even saw a big guy beating his dog. This enrages Blake.

We go to Hennings home where he is talking on the phone about the earlier attack of Porcelain on the muscle thugs earlier. He sees Blake at his side door. He asks to people he is on the phone, probably cops to come over armed. Blake is at the door in complete Catman costume. He attacks Hennings and punches him into Hennings glass coffee table. Blake continues beating Hennings when his dog comes down the steps. Hennings named the dog Perp and orders him to attack Blake. All Perp does is roll onto his back. The cops arrive with guns drawn and are immediately attacked by the other members of the Secret Six. The team leaves with the dog as he urinates on the front door of the house.

We end back at the house, Wells leaves and we see that he is contacting the Riddler and calling him Mockingbird. Next “how the Hell we got here”.

This issue is a mixed bag for me. It is a set up issue, unfortunately with missing the issues for the two months of Convergence, we have to get to know the characters again, or did we really know them in the first place. There was not much action here but I think the reveal of the Riddler at the end makes up for the apparent slow pace of this issue. It really makes me want to continue with this series to see where it is going.

I enjoyed seeing Catman’s costume. I like it, the mask he wears mixes in well with this hair and makes it look like the mask is a part of his face. It was good to see the team fight together but I do want to know what Wells’s deal is and how does the Riddler fit in. I was bothered with the pacing of this story but I was excited to see the last panel.