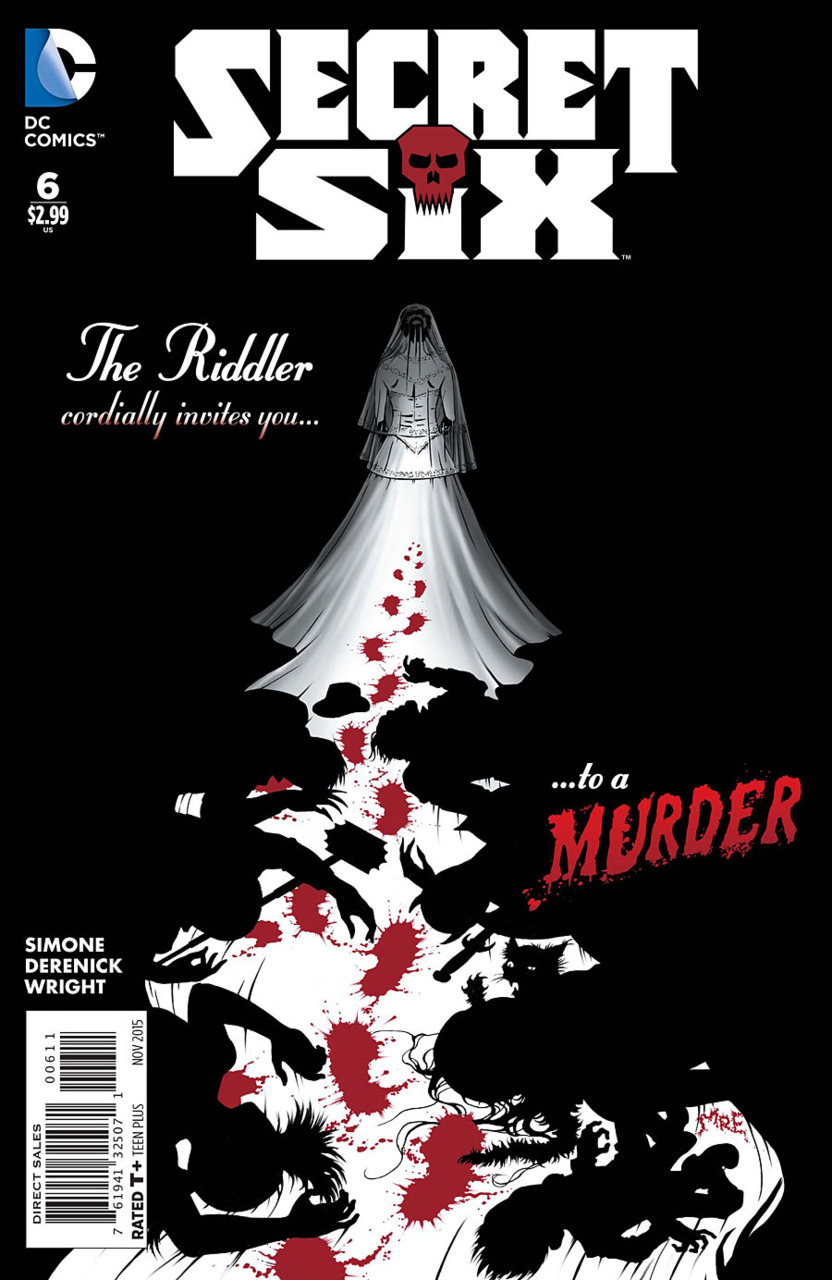 “Whippings and Apologies” opens with Catman and Strix still conscious facing off with Riddler and his gang. The others: Black Alice, Porcelain and Ventriloquist are unconscious from the knockout darts and Big Shot is holding Sue. Riddler wants the India Star diamond and he thinks one of the Six has stolen it. Riddler was going to use the diamond to give to Sue as a wedding ring. To force the information out, Riddler will torture the unconscious team members starting with perhaps Black Alice. Big Shot protests, the deal for his involvement was that no one was going to get hurt.

Strix starts writing a note to Blake. She is asking if she should kill the Riddler’s men herself or wait for the others. She does not wait for an answer, she single handedly takes out all the Riddler’s men. When the blood bath is over she writes Riddler a message: “DON’T TAK ABOT ME LIK IM NOT HEER.” Riddler starts to panic and Blake calls Strix off, he will take it from here. Catman starts to pound on Riddler until Sue steps in.

Sue has a detonator and she will use it to kill everyone. The detonator she is holding will detonate enough C-4 to make identification of the bodies very difficult. Big Shot is shocked at this development. Riddler takes this distraction to start beating Catman with his cane.

While Riddler holds off Strix, Sue and Big Shot talk. Sue does not remember Big Shot or their previous relationship and she does not want to remember. She immediately goes to the Riddler who again asks where the diamond is.

While this conversation goes on with Riddler, others of the Six start to wake up. Most notably Ferdie and Porcelain. Blake asks Big Shot to step away from Sue so the others can make their move. Big Shot refuses and asks the others to leave him alone with Riddler. The others refuse and Big Shot starts to fight Catman, Strix and Porcelain. While this fight goes on, Ferdie attacks Riddler with his screw hands and reveals that he has the diamond that Riddler wants.

As the fight with Big Shot continues, Black Alice wakes up and channels the power of Black Orchid to end the fight. While the fight was going on everyone lost track of where Alice was and she activates the detonator destroying the pier. Everyone jumps off the dock as the pier explodes. Ferdie lost the diamond in the explosion. The Riddler also disappears.

Riddler escaped but Big Shot wants to go after Sue. He starts to ask Alice for help when she collapses in his arms saying that she sees the Spectre and he is calling her and then she stops breathing. Next issue: The House of Strangers.”

This issue was a little better than last month . It was fun to see Strix work and the fight with Big Shot was dynamic with Catman, Strix and Porcelain together fighting Big Shot. I still have the problem that Big Shot is Dibny. I also have an issue with Sue’s lack of memory and her hanging off of the Riddler. Again one of the best love stories in comics in my opinion was the marriage of Sue and Ralph Dibny and I do not like this use of the two characters.

It was fun to see Ferdie take out the Riddler and it was interesting that he actually had the diamond all along. It makes me wonder what this “puppet” is as we have seen him act independently of the Ventriloquist before.

I am becoming more and more intrigued with the Black Alice character. Here is the first time she says that she borrows the powers of others and I am interested in seeing what caused her to lose consciousness and stop breathing after identifying the Spectre. How will the Spectre factor in this story?