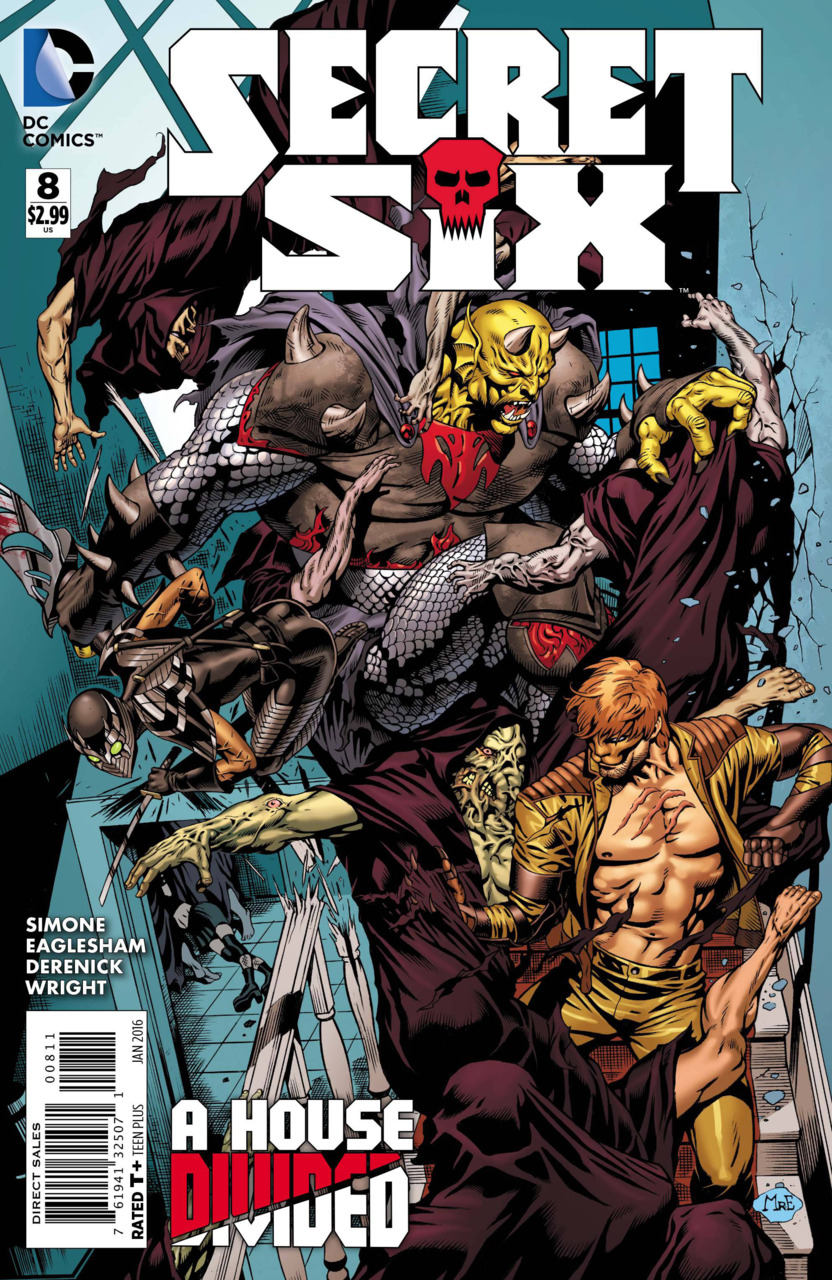 The Secret Six try to save one of their own, Black Alice, as they visit sunken Atlantis and have a run in with the master of the seven seas.

Let there be spoilers…

Our story opens with a history lesson about how the fearsome and malevolent Giants used mankind as their playthings. They are ever-watching humans and encourage and delight in our vicious passions. All that is holding them back from causing more evil on earth is a Gate and that Gate is crumbling. When it does, the evil Giants will certainly return.

We return to last issue’s fight at the hospital. Felix Faust, Cheetah and some of their magical pals are attacking Big Shot and Black Alice. Alice is in full bloom, channeling several magical powers at once and is overwhelming her foes. Cheetah tries to attack her but Alice steals her feline power rendering her fully human.

Back at the mini-golf range, Etrigan the Demon, wearing an adorable ensemble of a polo shirt, shorts and high white socks, is telling Catman, Ventriloquist, Strix and Porcelain that the magic users want Alice dead because she is stealing magical powers making the Gate unstable.

Suddenly a quartet of mysterious robed figures calling themselves the Children of Arion, the true Atlanteans, appear. They announce their desire to help Alice.

Back at the hospital, channeling all of the magic powers is going to Alice’s head in a murderous way. Big Shot tries to get her to calm down so she doesn’t do anything truly heinous. Alice agrees to a one-time-only offer of amnesty if Faust and his buddies leave them alone. However, one of her attackers, Orchid, points out that the magic users can’t leave Alice alone. Alice is threatening the White Gate which was created by an Atlantean wizard who gathered all of the world’s mystics to protect the earth from the Giants. The Gate is made up of four magical alabaster columns hidden around the earth. Alice can not be allowed to destroy this protection.

The Children of Arion, at mini-golf, say that to save Alice they must destroy the columns. At the hospital, Orchid says if they want to save the world they have to protect the columns. A dilemma ensues. Felix Faust and the others try to convince Big Shot to help them to no avail. BS is sticking by Alice. At mini-golf the rest of the team votes to help the Children of Arion. Big Shot drops the exhausted Alice off with Ragdoll and Scandal Savage. Jeanette joins the Six on their quest because she is gun-shy of Alice’s powers.

Much to Catman’s dismay the first column is in Atlantis at the bottom of the sea. Catman is not a fan of water. The team, including Etrigan, travels to the sunken city in a bubble created by one of the Children.

They make it to the alabaster column but are met by Aquaman who tells them they are not welcome and must leave. Catman attacks Aquaman and the ladies on the adventure take a quick moment to appreciate the battle of glorious manflesh. As the fight progresses the team works on raising the column much to Aquaman’s dismay. As their protective bubble collapses the team finally pulls the column from the depths.

On dry land the Children of Arion sense that the first Alabaster column has been destroyed but that team has perished. The Children turn into hideous creatures who are apparently trying to bring the evil giants back to earth and now need to find more suckers to do their bidding. To be continued…

This new Secret Six story arc is shaping up to be a big improvement over the last. The first few issues of that arc was plagued with some publishing problems and the story line suffered. It appears now that the book is hitting a stride in all its Lovecraft-ian glory.

I like how Gail Simone is introducing the magical portion of the DC Universe into the Secret Six Universe. I’ve always thought Black Alice had good potential as a character and it is terrific to see her being fleshed. She is impulsive, petulant and broody, but you always get the sense that she just needs to grow up and learn to properly respect her powers. Her relationship with Big Shot is really sweet and I just love the moments where they stand by each other. What I love about Gail Simone’s stories are the relationships and she succeeds here in spades.

It was also wonderful to see Ragdoll again. He is another character I’ve always liked because he adds an edgy but comical dimension to the dialog. I know, I know, I love the freaks.

Where this book really stands out however is in the art. The combination of Dale Eaglesham and Tom Derenick’s lines with Jason Wright’s beautiful color palette makes Secret Six a feast for the eyes. The panel with Black Alice in full magical bloom is a rich mix of purples and greens. Atlantis is a lovely shade of aquamarine contrasting with Aquaman’s gold weapons and Catman and Etrigian’s brown skin.

I am going to give this issue a good rating but I’m going to hold back a bit because I suspect future issues are going to need some room to grow. Secret Six is turning into one of my favorite books published now and I look forward to the future.