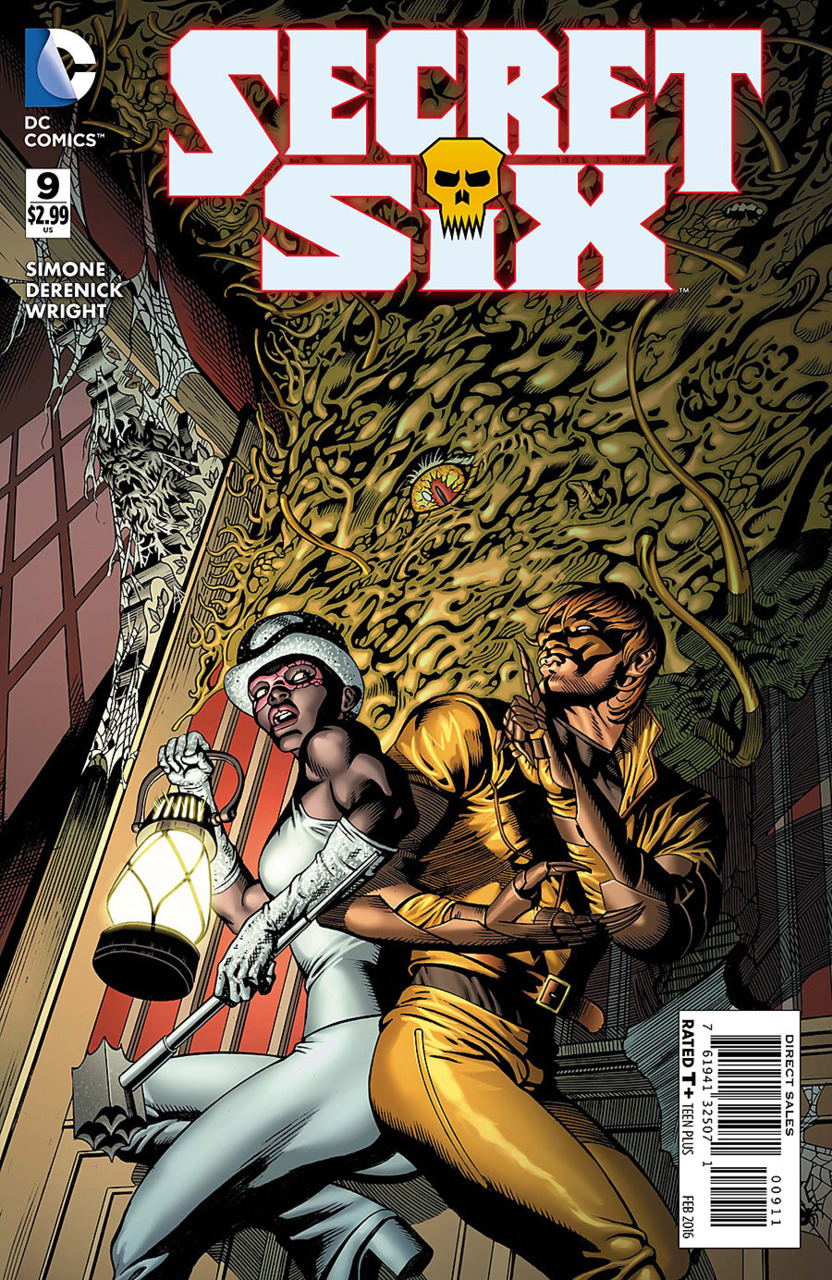 Our heroes travel from the bottom of the sea to a creepy rural New England town to save one of their own, but in so doing risk bringing gruesome disaster onto the earth in Secret Six #9.

A group of Justice League Dark members complain about Black Alice and her powers. She is draining the magical force from the team members and they don’t like it one bit. Particularly affected by the energy drain is Swamp Thing who recognizes that the evil beings everyone was worried about in issue #8 are getting closer to coming to earth.

Meanwhile, at the bottom of the ocean, Catman is fighting Aquaman while Ferdie gives new readers a recap of the action. A group of the Six are underwater and are trying to destroy one of the Alabaster Columns scattered around the globe so they can save Black Alice. However, if the columns are destroyed the monsters will come to earth and cause havoc. Such a conundrum.

Big Shot points out that the air bubble they have traveled to the sea floor in is collapsing. Porcelain is able to give the column a mighty wallop which shatters it. As this happens a vile creature is awakened somewhere on earth. Uh oh. Anyhoo the air bubble is in complete collapse.

In Metropolis the True Atlanteans pray to the Elder God to help out the team and get them off the ocean floor. Aquaman begs them to stop busting up the columns because it will bring horror to the earth.

Back at Scandal Savage’s apartment Black Alice is asleep and feverish from channeling all the magical energy. Scandal and Ragdoll do what they can to help her. The feverish Alice mutters that the team shouldn’t trust the Atlanteans. She also starts to talk backwards channeling Zatana. Her feverish spell summons two lions with wings. Scandal and Ragdoll have their hands full.

Returning to Team Alabaster, they find that the next column is in a town called Perdition in rural New England. The gang puts on some outrageously old fashioned clothes including a prom dress which looks particularly odd on Strix. The awakened monster from earlier senses their approach. They are met by a creepy little girl who is walking barefoot in the snow. The girl asks them if they are here to see the mine, my guess is yes.

Scandal is defeating the last of the winged lions when Alice finally wakes up. Scandal tells her what has been going on.

Back at the mine, the monster perks up a little more as the weird girl leads the team to the mine. There they meet the townspeople who have been waiting for someone to rescue them from the creature down below. The creature has trapped the townspeople and hasn’t let them die. The team makes their way into the gloom where they see the next Alabaster Column surrounded by something that looks like a slimy Lovecraftian Yog-Sothoth. The creature has been waiting for the columns to be destroyed so the gate between worlds can be opened bringing its brothers back to earth.

Swamp Thing shows up and tries to stop the team from destroying the column. Etrigan sizzles him with his fire breath. Big Shot and Jeanette lift and break the column. The creature believes that the Six have helped bring his brothers closer.

Knowing that they are playing with unspeakable horror Big Shot and Jeanette use the column to smash the slimy creature in the head. Or whatever that is.

The famished townspeople then descend on the beast aiming to fill their bellies. They must be hungry.

Black Alice has heard that her friends are risking their lives and the safety of the planet in order to save her life. She can’t live with this knowledge and asks Scandal Savage to fight and kill her. Until next month….

As a big H.P. Lovecraft fan I am enjoying this story arc. I love the creatures of unspeakable horror and the creepy New England setting of some of the story. Thought I’m not really sure why they think unleashing creatures from beyond is such a good idea even if it does save Black Alice. I get that they killed the one fearsome beast, but their work just brings the evil closer and closer. Seems counterproductive.

The art by Tom Derenick and colors by Jason Wright work well together. I particularly liked the scene where the winged lions arrive as well as the humorous old timey getups the team gets into to go to creepy New England.